Central Index Key (CIK): 0001418091 | ISIN: US90184L1026 | Symbol: TWTR | Type: Stock.
Twitter Inc. Is an American company that has created a platform for the exchange of messages and the publication of short posts in the microblogging format. The service is available free of charge. The main office is located in San Francisco. The company has servers in the cities of San Antonio and Boston. Today, the social network unites the whole world, and the profit of Twitter Inc. for 2020 amounted to $ 1.29 billion. Twitter stocks were first listed on the stock exchange in 2013. Their price immediately increased by 85%. Twitter (TWTR) stock price today, live price online, charts, professional analytics, technical and fundamental analysis, comments, reports, dividends and more about Twitter stocks.


Simple and lightweight Twitter Stock Live Chart is a powerful free tool that allows you to easily conduct technical analysis online without downloading additional files and applications. In order to meet the needs of the most demanding technical analysts, you can find over a hundred chart analysis tools on our Twitter stock chart. You can also add any of 80 technical indicators directly to the chart online - in two clicks. The possibilities are endless!


Twitter Stocks Technical Analysis widget is a modern handy tool that shows ratings based on technical indicators data. The design of the widget is made in the form of a speedometer, thanks to which you can quickly see the results of the summary technical analysis. You no longer need to use many indicators for analyzing financial instruments, the widget will do it for you. In addition, all rating data are updated in real time. These technical indicators are used for technical analysis: Relative Strength Index, Stochastic, Commodity Channel Index, Average Directional Index, Awesome Oscillator, Momentum, MACD, Stochastic RSI, Williams Percent Range, Bull Bear Power, Ultimate Oscillator, Exponential Moving Average, Simple Moving Average, Ichimoku Cloud Base Line, Volume Weighted Moving Average, Hull Moving Average.

Twitter Inc. founded in 2006 in the USA. The idea of creating a social network, which was originally supposed to unite a small group of people and allow them to exchange short messages, belongs to Jack Dorsey. On March 21, the first message was published on the social platform, but its main purpose is to use it as an internal service for communication between Odeo employees. It was being finalized, supplemented with new options. And in July the final version was presented.

Twitter is the main product of the company. It is a network of the same name for the public exchange of short messages, posting news and publications of public interest. Users can follow each other's profiles, track their activity.

In October of that year, the Obvious Corporation was formed, which acquired Odeo and Twitter. A year after its creation, the social platform began to gain popularity, the number of tweets per day increased to 60 thousand. Since 2012, it has been allowed to use the social network for advertising, previously this opportunity was only provided to large organizations.

Gradually, the Twitter service gained popularity, including outside the United States. The management of the company was transferred first to Evan Williams, then to Dick Castolo. Each contributed to the development of the product and contributed to the popularization of the social network. In 2009, for the first time on Twitter, a user gained 1,000,000 subscribers. It was Ashton Kutcher. In April 2010, the administration and creators started introducing innovative technologies and monetizing the service. This is how promoted tweets, accounts and trends were born.

2011 - in January-April, the company earned almost 24 million, but recorded even more losses due to research and development;

2014 - the company entered into a partnership agreement with IBM;

2015 - launch of video communication technology and group chats, purchase of a startup Periscope;

2017 - the maximum length of publications was doubled;

2018 - launch of the encrypted messaging function;

2019 - the company has banned advertisements of a political nature;

2020 - testing the option of voice tweets, which is available to owners of Apple smartphones, disabling the Twitter via SMS service.

Twitter is in the top 10 most visited web resources. In 2020, the number of active monetized users grew, the company's revenues increased by 24% in the United States, and by 34% worldwide. The market cap is $ 38 billion, and Twitter's stocks price is up 3%.

In the past few years, until 2021, the value of Twitter securities has remained virtually unchanged. The first maximum figure was reached in 2014, a year after its listing on the stock exchange. Then the cost exceeded the $ 50 mark.

The company says revenues will skyrocket in 2021. The average monthly increase in the value of a Twitter stocks during the growth period averages 5%. The company has a lot of potential, which helps to increase the number of users, income and stocks value. The main trading floor for Twitter stocks is the NYSE. The stock ticker is TWTR.

Indeed, the price of Twitter shares is falling. How do you know this? Predictions come true and because of this it becomes scary in a good way) ...

On the weekly timeframe for Twitter stocks, you can see strong buys, which were absorbed by the constantly decreasing sales volume. There was also a weak buyer last week. I think that we will continue to decline to the buyer's zone in the weekly time of $ 53.10-51.75 per stocks on Twitter (TWTR). 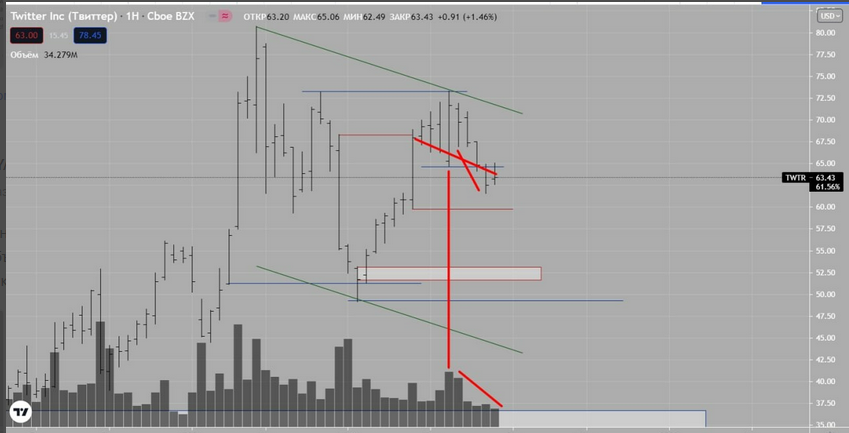 Bring to your attention Twitter Stock Returns Over the Last 12 Months: + 54%!

Wow, wonderful blog format! How long have you been running a blog for? you make running a blog look easy. The overall glance of your web site is magnificent, let alone the content!

The true strength index (TSI), is a technical momentum oscillator used to identify trends and reversals, - Broke the balance line in the direction of the bears. Look at the graph.

Awesome Oscillator is in the negative zone - value 4.75. See chart. 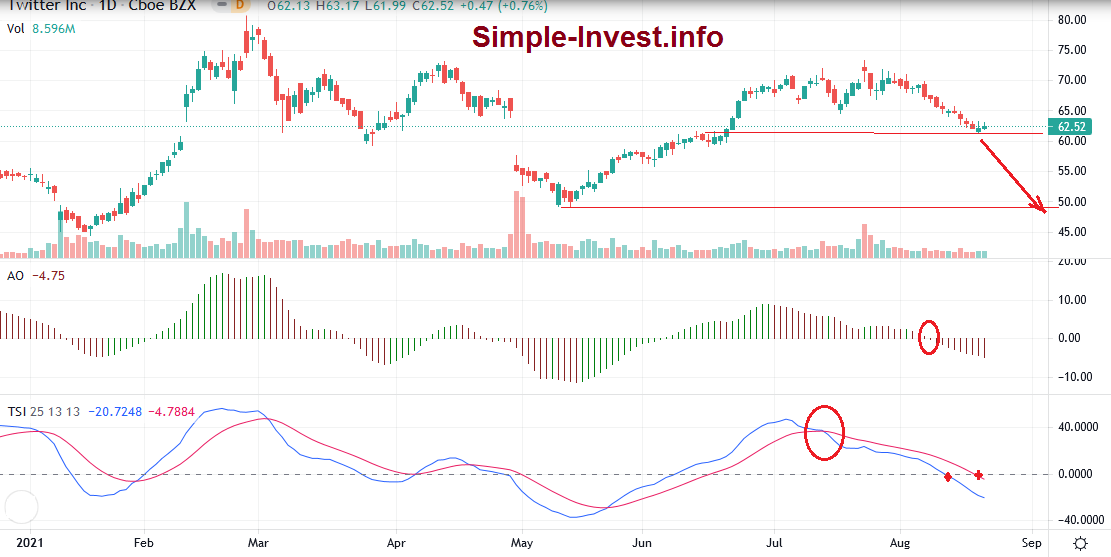 Major US stocks fell for the second day in a row on Wednesday, as investors digested the latest Fed meeting minutes to get an idea of the plans to wind down.

The markets are correcting after the Fed's statements about the beginning of the stimulus curtailment, but the fall is not critical and is expected by everyone. We continue to hold all securities. With a good drawdown, we will buy more.

There is still a lot of liquidity in the market, the volume of reverse repo continues to grow. Remember that it doesn't matter if the portfolio grows or not, it is important whether you beat the market in the long run. The exchange is where money goes from impatient to patient.

On July 13, the MACD technical indicator went into the red zone, which attracted stock sellers - bears.

On August 6, the stocks price of Twitter broke through the support level of $ 67.5 and consolidated below.

On August 7, the RSI market indicator consolidated in the selling zone - a powerful signal for sellers. The price started to fall.

I am not sure where you're getting your info, but great topic.
I needs to spend some time learning more or understanding more.
Thanks for excellent info I was looking for this info for my mission.