Rocket Lab USA (RKLB) is an aerospace company offering launch services to its customers, as well as developing and manufacturing small medium-sized rockets and spacecraft, propulsion systems and other components for the space industry. The company's business is divided into two main segments:

Last year we covered Rocket Lab as part of our review of promising issuers in the aerospace sector. Despite a significant amount of negativity in the markets this year, our positive view of the company's prospects is supported by news from Rocket Lab, so we bring you an update on this investment idea.

Rocket Lab generated 66% of its revenue from the Space Systems segment and another 34% from the Launch Services segment in its most recent reporting quarter. Let's take a closer look at these areas.

Among the company's achievements in this segment in Q2, the following are worth highlighting:

On 9 June, Rocket Lab announced that it had been selected by Ball Aerospace to manufacture solar panels for NASA's GLIDE spacecraft.

The production of satellite platforms was launched under a $143 million subcontract to produce 17 spacecraft for Globalstar. The space platform production experience is notable in that such elements can be used in the future production of other satellites, which reduces R&D costs and production time, while increasing system reliability through repetitive rework.

Passed the milestone of 50 missions with the MAX flight software, developed by the takeover of Advanced Solutions Inc. in October 2021. We believe that the software's proven reliability will allow the company to continue to generate cash flow from this development in the future. The company itself says that to meet the growing demand for this kind of software, a new space systems facility in Littleton by the end of 2022. This solution will further expand the potential customer base and increase market stock.

Next, Rocket Lab continued the chain of good news:

On 14 October, Rocket Lab announced that it had been selected by NASA's Jet Propulsion Laboratory to produce solar panels to power mobile robots as part of the Cooperative Autonomous Distributed Robotic Explorers programme. The project is a good opportunity to showcase the IMM solar cells developed by Rocket Lab's acquisition of SolAero Technologies in January. These cells have best-in-class efficiency, weighing 40 percent less and generating the same amount of power as conventional cells. In a separate development, reducing cell weight while maintaining other parameters is the most important parameter in the space industry, which means the successful use of such cells in NASA's mission could potentially open up new contracts for the company in this area.

On 27 July, the company revealed that it will provide solar power assemblies for Lockheed Martin's missile warning satellites. Given the geopolitical environment, we anticipate that the US Space Force could increase its order volume while tensions remain high, which would have a positive impact on the company's financial results.

In addition, we highlight the Photon spacecraft, which is currently more than 1.3 million km from Earth. Experience in designing, manufacturing and operating such a vehicle positions the company well as a contractor for future interplanetary missions to Mars and Venus. 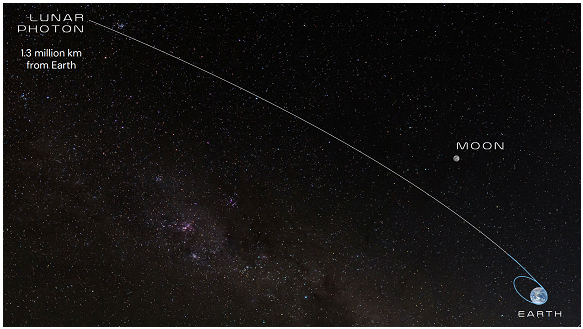 In Q2, the company took a number of important steps in this direction as well:

NASA's lunar orbiting satellite, Artemis, was successfully launched on 28 June. The successful cooperation case is notable because the programme includes missions until 2027 and the participation of a lunar space station and astronauts. The cost of the programme will reach $93 billion by 2025. In addition to the potential financial benefits of further cooperation, we expect that participation in the programme will help increase Rocket Lab's visibility through media coverage of mission-related events and, knowing the US love of the subject, in possible motion pictures. Wider recognition of the company could make a positive contribution to increasing Rocket Lab's investor base and shareholder value.

Construction has begun on the Neutron booster plant in Virginia. A year ago we also told you about the start of development of this medium-sized rocket, which would open up the market for Rocket Lab's government science mission orders, which perfectly complements the previous point about the Artemis mission.

On 19 April, the company announced the signing of a contract with HawkEye 360 to launch 15 satellites as part of three Electron missions from late 2022 to 2024. The contract also entails the provision of separation systems for each satellite, which demonstrates the effectiveness of the vertical integration strategy and supports the company's financial results, including those of its Space Systems segment.

On 2 May, Rocket Lab attempted to catch the chute-returned upper stage using a helicopter and was able to capture it, but due to the unstable behaviour of the helicopter, was to drop it. However, the upper stage itself returned to Earth in good condition and was sent for further analysis, which will help improve the re-entry procedure in the future. During a conference call on August 11, the company's management said it wanted to make another attempt this year. If the upper stage re-entry technology is successfully refined, it would allow Rocket Lab to save a large portion of the cost of producing the Electron booster in the future, which would translate into a significant increase in space launch margins and, as a result, help boost the company's stock price.

Other positive factors that inspire confidence in the company's bright future 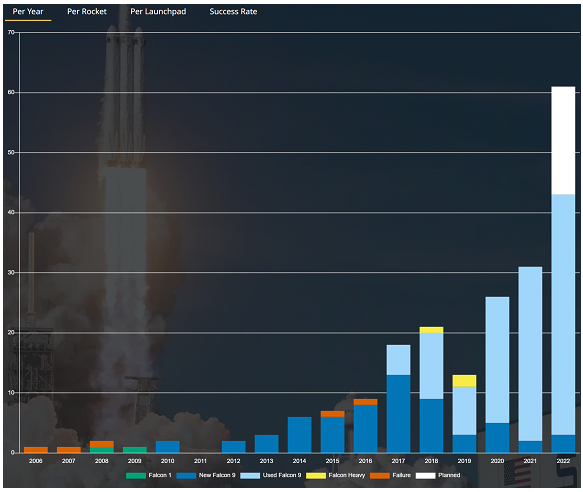 Successful launch statistics are crucial for the aerospace industry because customers are more likely to use more expensive but more reliable services. In addition, Astra's history this year has shown that the market does not let mistakes go unnoticed and rightly "crashes" when launches fail: after the problems on February 10 the ASTR stock price fell by 26%, and after the failure in June the market responded with a 24% drop in stock price.

On 12 October, Rocket Lab announced the delivery of the Electron booster to the Virginia launch facility. The mission, scheduled for 2 December, will launch a batch of satellites as part of the HawkEye 360 contract. A successful mission is expected to remove some of the uncertainty from the contract and positively impact the company's stock price.

On October 7, the company announced the successful launch of its eighth rocket of the year, breaking its previous record of seven launches in a year in 2020. The trend towards increasing the number of launches positively affects the company's prospects, as the main costs in the space industry occur in the development and testing phases of launches, and increasing the frequency of launches further reduces the payback period for such investments.

On 4 August, the company reported the successful launch of the second of two missions for the US National Reconnaissance Office (NRO). This could play well for the company going forward, as Maxar, BlackSky and Planet won 10-year contracts from the NRO this year worth more than $4bn, which could signal more such launches in the future and supplement Rocket Lab's cash flow from launch services.

On July 9, Rocket Lab announced that it had signed a contract with the US Transportation Command to study the use of Electron and Neutron boosters to transport cargo around the world, as well as researching the Photon spacecraft to create in-orbit cargo depots. If the study results are positive, Rocket Lab will open up a new market for rapid transportation, which, in our view, should have a large positive impact on the company's stock price.

Operating cash flow: down from $52.2 million to $99.8 million, mainly due to lower net profit and changes in working capital in respect of inventory and prepayments for future periods

Based on the results of the last reporting period ended 30 June 2022: 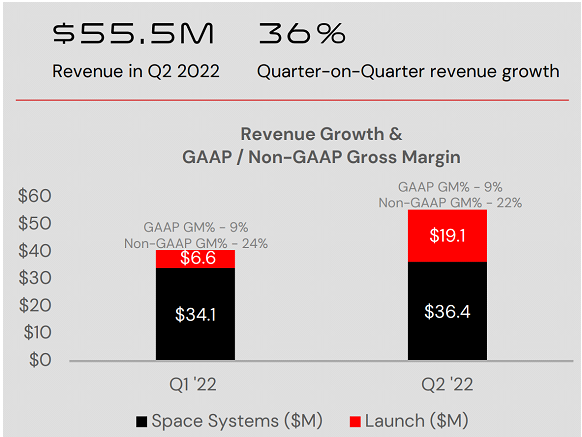 Operating cash flow: decrease from $21.1 million to $38.3 million, mainly due to lower net profit and changes in working capital in respect of inventory and prepayments for future periods 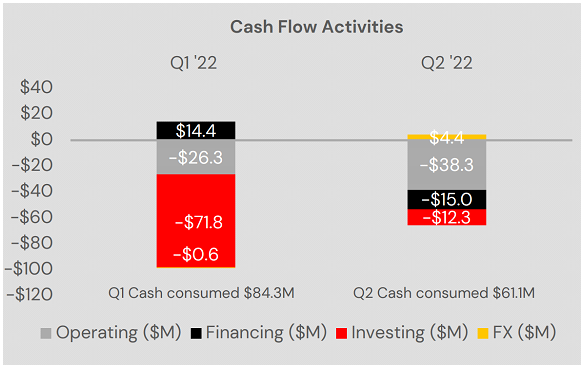 In our view, Rocket Lab has performed well financially, growing the most important metric for companies at this stage — revenue growth. A large part of the operating costs are R&D expenses, which will help the company generate more stable cash flows in the future through new developments.

A good reserve of cash and equivalents, coupled with negative net debt, indicates that the company has sufficient financial strength to confidently pursue its growth-oriented plans.

For a comparative analysis of the companies, let's look at SpaceX: while Rocket Lab's market capitalisation is around $2.25bn, SpaceX is valued at $125bn in the private market. The companies' business model, although used for different payload weights, is similar: providing low-cost launch services. Taking into account the good attempts to return the boosters, the excellent statistics of successful launches and the use of cleaner fuel components (methane Neutron versus paraffin Falcon), we believe that the company has every opportunity to grow to a comparable size in the future. In addition, assume that if SpaceX's IPO is successful, other companies in the industry, including Rocket Lab, will also be overvalued by a larger margin.

According to Refinitiv, the company's trading multiples are currently at the following level: EV/S: 8.99x; P/B: 3.08x. In our view, this is an acceptable level given the company's growth rate: based on 1Q2022 results, Rocket Lab more than doubled its revenues year-on-year and almost quadrupled its revenues in 2Q2022. 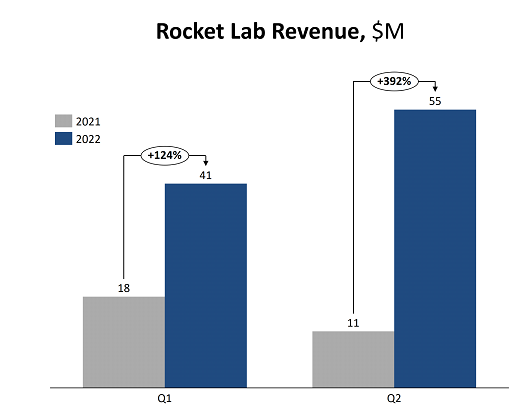 For Q3 2022, the company expects to generate revenue in the range of $60m-$63m, compared to $5.29m in the same period a year ago. Given the absence of any major negative situations in the quarter, we expect management's forecasts to be achieved.

The minimum price target set by Credit Suisse Group is $3 per share. Roth Capital has in turn set a target price of $20. According to the consensus, the fair value of the stock is $12.1, which implies a 96.46% upside potential.