Ripple can be bought in a few seconds on the EXMO cryptocurrency exchange.

Simple and lightweight Ripple Live Chart is a powerful free tool that allows you to easily conduct technical analysis online without downloading additional files and applications. In order to meet the needs of the most demanding technical analysts, you can find over a hundred chart analysis tools on our Ripple chart. You can also add any of 80 technical indicators directly to the chart online - in two clicks. The possibilities are endless!


Ripple Technical Analysis widget is a modern handy tool that shows ratings based on technical indicators data. The design of the widget is made in the form of a speedometer, thanks to which you can quickly see the results of the summary technical analysis. You no longer need to use many indicators for analyzing financial instruments, the widget will do it for you. In addition, all rating data are updated in real time. These technical indicators are used for technical analysis: Relative Strength Index, Stochastic, Commodity Channel Index, Average Directional Index, Awesome Oscillator, Momentum, MACD, Stochastic RSI, Williams Percent Range, Bull Bear Power, Ultimate Oscillator, Exponential Moving Average, Simple Moving Average, Ichimoku Cloud Base Line, Volume Weighted Moving Average, Hull Moving Average.

When it comes to Ripple, you should distinguish between the project itself and the XRP cryptocurrency. Ripple is a private commercial organization that created the open source distributed payment protocol of the same name.

According to the founders of the project, its main goal is to create an “Internet of Values” - a common, neutral and global infrastructure for the free and instant exchange of values. Basically, Ripple's mission is to become a more affordable and faster alternative to the SWIFT system.

For these purposes, the project created the Ripple Network, a real-time digital and fiat asset exchange network that runs on top of the XRP Ledger (XRPL) distribution ledger with the XRP token.

XRPL is not a blockchain and, according to Ripple, is not legally or organizationally associated with the company in any way.

Therefore, one cannot say that Ripple and XRP are the name and ticker of the same cryptocurrency, like Bitcoin and BTC. Ripple is a company, RippleNet is a payment gateway powered by the XRP Ledger and built by Ripple, and XRP is the native XRPL token. It is designed as an alternative to Bitcoin, with a focus on providing secure, instant and cheap cross-border payments.

As reported on the official XRPL website, in 2011, three developers David Schwartz, Arthur Britto and Jed McCaleb, who is also the creator of the Ripple Stellar fork, wanted to create a more robust transaction verification system - a kind of "Bitcoin without mining" due to its inherent drawbacks ...

Since XRPL does not operate on the blockchain, therefore, it does not rely on the mining and staking process to confirm transactions. Instead, the network uses its own Ripple Protocol Consensus Algorithm (RPCA). It defines how XRPL is managed by a network of independent Ripple validator nodes. Any transaction must be confirmed by at least 80% of the network nodes.

Anyone can become a validator, but Ripple maintains a so-called list of trusted or unique nodes - a certain set of reliable validators, which include universities and financial institutions.

What gives Ripple its value

Unlike most crypto projects that serve the needs of a decentralized network, Ripple is built to connect banks, payment providers, and crypto exchanges. This allows for real-time settlement transactions and lower transaction fees.

That is why there are major players in the financial sector among the clients of the project. So, as of September 2021, the company has entered into partnerships with financial companies from more than 50 countries of the world, including such giants as Bank of America, American Express, SBI Holdings and TransferGo. And the largest venture capital funds, including Andreessen Horowitz, IDG Capital Partners, Lightspeed and Google Ventures, had a hand in financing the project.

Earlier, MoneyGram was also listed among the project partners. In 2019, Ripple even bought a 10% stake in the company to encourage the payments giant to use XRP in its operations. However, in March 2021, they ended their cooperation amid a litigation between Ripple and the US Securities and Exchange Commission.

Ripple vs US SEC

Ripple's first clash with American regulators happened back in 2015: then the company was fined $ 700,000 for selling XRP tokens without the required license. As part of the dispute resolution, Ripple also agreed to introduce a Know Your Customer verification procedure for prospective XRP investors.

The litigation between Ripple and the US SEC kicked off on Christmas Eve, December 22, 2020. Then the SEC filed a lawsuit against the top managers of the company - CEO Brad Garlinghouse and co-founder of Ripple Chris Larsen. According to the department, the company violated the law on the sale of unregistered securities in the course of investment transactions with XRP.

The lawsuit notes that XRP is a security and is subject to registration with the SEC, as Ripple solely controls the infrastructure of the cryptocurrency. The department insists that the company, thus, misled investors by selling digital assets worth more than one billion dollars.

The statement also says that Ripple is heavily dependent on the sale of tokens, using the proceeds from the sale to fund its operations. In turn, representatives of Ripple have repeatedly emphasized that XRP is recognized in many countries as a conventional cryptocurrency, therefore, it is not a security, it is used to conduct international and domestic transactions, and does not require registration with the regulator.

The SEC lawsuit led to the fact that the XRP rate collapsed almost three times, almost completely recovering after a month and a half. Nevertheless, a number of American cryptocurrency exchanges ended up excluding the cryptocurrency from the listing.

In August 2021, the non-profit organization Empower Oversight filed a request with the SEC regarding the regulation of cryptocurrencies and possible conflicts of interest among its employees. The organization suggests that representatives of the department were materially interested in defending the interests of supporters of bitcoin and ethereum, as well as in prosecuting Ripple.

The start of the consideration of the case is scheduled for October 15, 2021. According to lawyers, the proceedings can only be completed by the beginning of 2022.

If the regulator loses, it will not only hurt the agency's reputation, but will also inspire the crypto industry, which has long accused the SEC of failing to develop regulation of the industry, and also make it difficult to initiate new such cases, according to Ripple lawyer - former head of the SEC - Mary Joe White.

As mentioned above, XRP is a formally unrelated cryptocurrency that the RippleNet network uses as an intermediary token for some transactions. The advantages of this integration are as follows:

Lack of mining. The cryptocurrency uses an original consensus algorithm, which implies the creation of a pool of trusted nodes to validate operations. At the same time, each participant himself chooses which nodes he will entrust the verification of his transactions.

High throughput. In theory, the network is capable of processing up to 1,500 operations per second. For comparison, the Ethereum network processes 20 such transactions, while Bitcoin processes 7.

High speed of operations. The project's website notes that transactions in XRP Ledger are confirmed in just 3-5 seconds, while it can take up to 2 minutes for Ethereum, up to 10 minutes for Litecoin, and up to 1 hour on the Bitcoin network.

How you can make money on XRP

Despite the fact that the litigation initially strongly affected the XRP rate, in mid-August 2021, the asset grew by more than 60% in just a week. According to Messari, at the beginning of September the ROI of the coin for the year was over 420%. This makes XRP suitable for trading and long-term holding.

On the EXMO cryptocurrency exchange, you can buy XRP for both fiat and cryptocurrencies for USD, EUR, GBP, BTC, ETH and USDT.

What to expect from XRP

Ripple's solutions are designed to help reduce costs and improve the speed and efficiency of cross-border payments. RippleNet also boasts partnerships with leading market players. And the more companies from the traditional financial sector join the Ripple solution, the more influence the company will have in the future.

However, Ripple will have to go through a difficult path to establish itself as an alternative to the market leader - SWIFT. In addition, the company also has a significant competitor in the crypto sphere - Stellar. Therefore, Ripple needs to stay one step ahead in its products and network development.

Ripple is also a prime example of regulatory challenges in the crypto sector. And for the development of the project, a clear decision by the authorities will be required on what type of assets XRP belongs to.

Nevertheless, despite the lawsuit, the cryptocurrency is in demand among investors. According to CoinShares, as of September 3, XRP-based investment product assets raised a total of $ 82 million.In comparison, assets based on Polkadot were able to attract $ 75 million, Solana - $ 44 million, and Litecoin - $ 25 million.

In addition, Japanese financial conglomerate SBI Holdings announced plans to launch the country's first crypto fund by the end of November 2021. In addition to Bitcoin, Ether and Litecoin, the institution also plans to invest in XRP.

Such interest on the part of the intuitals speaks of their confidence in the future of the project, which in the long term should have a positive effect on the rate of the cryptocurrency. Thus, the well-known analyst and trader Peter Brandt, who anticipated the Bitcoin surplus in January 2018, predicted further XRP growth by as much as 276% in April 2021. Along with that, he assumes that in the long term the asset will be subject to serious correction, but the timing of this event has not yet been determined.

Ripple can be bought in a few seconds on the EXMO cryptocurrency exchange. 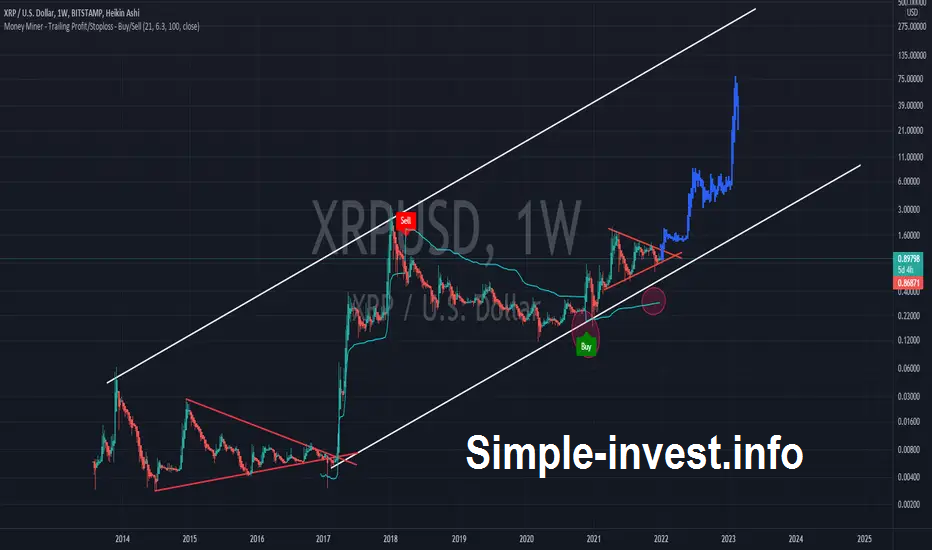 If XRP breaks that red triangle zone, we could see XRP start to take off!

We can see the indicator I have on the chart is still saying BUY!

We could see the whole crypto market reach around $5-8 TRILLION by next year!