PagSeguro Digital (PAGS) specialises in digital payment processing solutions for e-commerce and provides payment terminals for small and medium-sized businesses in Brazil. In 2019, the company launched PagBank, a digital bank that now has 26 million users. The company was founded in 2006 and is headquartered in São Paulo, Brazil.

When looking at companies that operate in emerging markets in Latin America, macroeconomics should be a top priority. In addition, the financial industry is one of the most dependent sectors on the overall economy.

Brazil is one of the largest economies, both in terms of population (214 million as of 2021) and market size. According to the IMF, Brazil's gross domestic product (GDP) is $1.89 billion, ranking it 12th in the world and first in Latin America. More importantly, Brazil's GDP is growing steadily, with only a decline in the backdrop of the pandemic in 2020. The GDP forecast, according to Statista, is shown below. 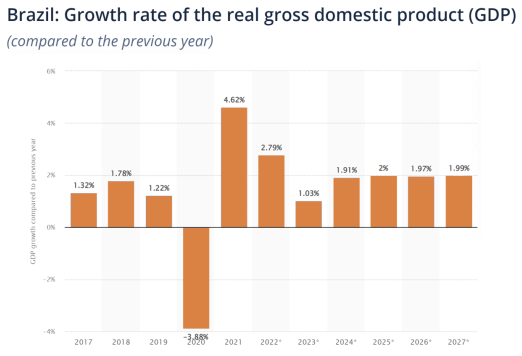 As in other countries, Brazil's soft monetary policy during the Covid-19 pandemic led to a significant acceleration in inflation. As a result, the country's central bank was forced to raise its key rate to 13.75%. The tightening has paid off — the consumer price index has fallen steadily in recent months to 5.9% in November, compared to 7.1% in the USA. 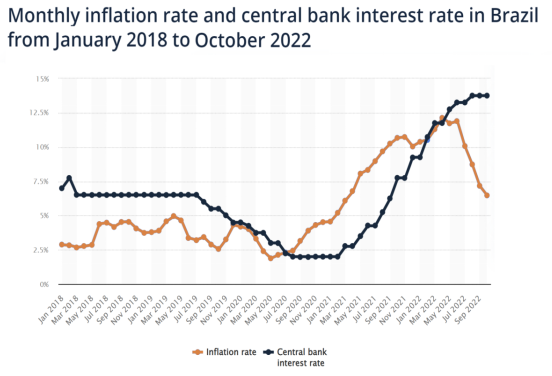 Inflation and key rate in Brazil

The risk of further economic policy tightening has always been a major risk for PagSeguro, as most of its revenue comes from payment processing fees and transaction volume declines during periods of rising key interest rates. However, judging by the latest inflation data, the peak of policy tightening is now behind us.

Overall, Brazil's economy is one of the most stable in the region, and its capacity provides significant potential for both banking growth and the expansion of payment transactions.

By far, the majority of PagSeguro's revenue comes from Transaction Activities (Transaction Activities). This has always been a key segment for the company, and it has been growing at a steady pace since its inception. In the first nine months of 2022, total payment volume (TPV) was R$260 billion, up from R$173 billion a year earlier, and TPV per Merchant grew from R$2,800 to R$3,800 in the same period.

It is worth noting that over the years, the company has grown significantly faster than the industry as a whole. In the first nine months of 2022, for example, PagSeguro grew 50% year-on-year, while the corresponding industry in Brazil grew 30%, and its market share reached 11% in Q3 versus 10% a year earlier.

We expect transaction processing revenues to continue to grow in the coming years. There are several key drivers that will contribute to this:

Although credit card penetration in Brazil has increased in recent years, the rate is still significantly lower than in developed countries. Today, only 55% of the country's population uses credit cards. By comparison, in the US, the penetration rate is 88%, and in Canada, it is 97%. 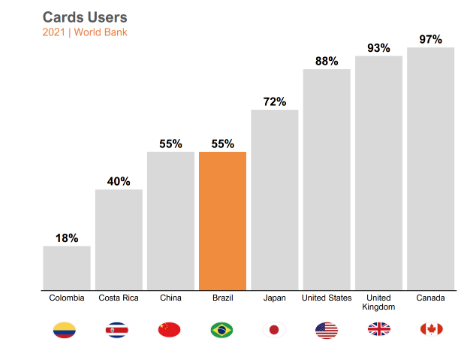 Assuming PagSeguro's market share remains unchanged in the coming years, only catching up with the Brazilian market to the level of the US could give the company room for growth of 60%.

Over the past five years, the e-commerce market in Brazil has grown at an average annual rate of 20.47%. At the end of 2022, the market is expected to be worth approximately $49.17 billion, which implies a 19.5% year-on-year growth rate. However, e-commerce penetration in Brazil remains relatively low at 9.6%. By comparison, it is 13.6% in Canada, 16.1% in the US and 46.3% in China. The growing popularity of e-commerce is a positive development for PagSeguro and an incentive for further growth. 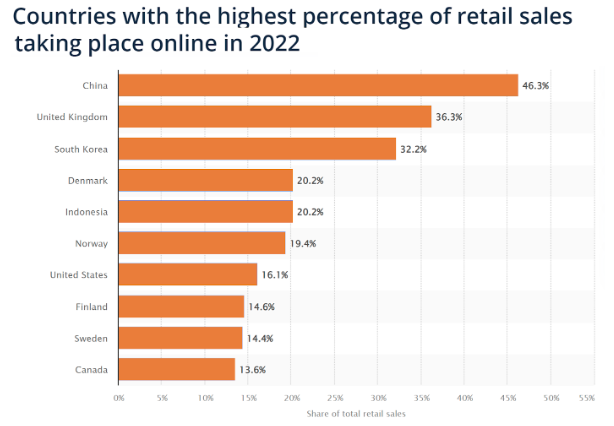 By accumulating a multi-million dollar user base (more on this below), PagBank can use tiered pricing. For example, it could offer bank customers better rates when paying for goods and services to merchants connected to PagSeguro services. In this way, the company could significantly increase its value in the eyes of merchants and encourage them to connect further.

Although relatively little time has passed since its launch in 2019, PagBank has become the second most-used neo-bank in Brazil. While its total number of customers was 6.1 million at the end of 2019, in Q3 2022, it reached 25.9 million, of which 15.8 million are active customers. The loan portfolio grew seven-fold over the same period to R$2.7 billion, while total deposits increased nine-fold to R$19.4 billion.

A key feature of Brazil's banking industry is its excessive concentration. The top five banks account for about 80% of the market. Below is a comparison of PagBank with the three largest banks in the country.

Although PagBank is one of the leaders in the digital banking market, its role in the Brazilian banking industry is still negligible, suggesting significant room for further growth. Over the past three years, PagBank's deposits have grown at a compound annual growth rate (CAGR) of 110%. Assuming the company can maintain a growth rate of 100% in the coming years, its deposit balance will exceed R$100 billion as early as 2025. This would be enough to realise profitable lending operations.

The expansion of lending activities can provide the company with interest income, which has a positive correlation with the key rate. In other words, if the key rate rises, interest income will rise, offsetting losses from declining transactions. Thus, not only can PagSeguro grow significantly in the long term, but it can also become a less cyclical business.

The analysis of PagSeguro's financial performance is presented in US dollars. The company's results for the last 12 months can be summarised as follows:

TTM revenue stood at $2.58 billion, an increase of 37.8% over 2021. Both transactional revenue and financial income showed growth.

Net income was $246 million compared to $209 million at the end of the year. Net margin decreased from 11.16% to 9.54%. The decline in margins was driven by higher finance costs due to active deposit-taking and an increase in the key rate. 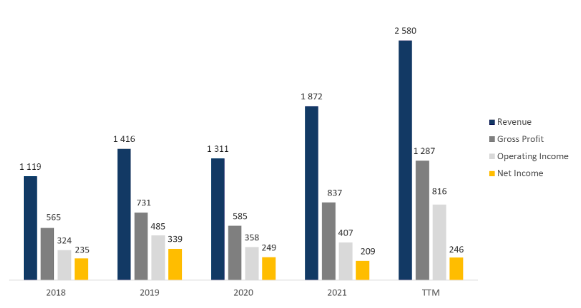 While PagBank's development is one of the key growth drivers for the company, its increasing share of the financial results mix is likely to put pressure on margins until the bank begins profitable lending operations. PagSeguro's advantage over other companies entering the digital banking market is its profitable lending operations, allowing it to finance growth independently and without sacrificing shareholder capital. In other words, PagSeguro is a profitable growth company with significant potential for further expansion, which can be supported by the firm's own cash flow.

Cash from operations (TTM) amounted to $329 million in the latest reporting period, compared to $166 million for the full year. Free cash flow to equity increased from -$158 million to -$106 million. The deep negative free cash flow is due to active investments in business development.

PagSeguro has a strong balance sheet: total debt is $177 million, cash equivalents and short-term investments account for $444 million, and net debt is deeply negative at -$267 million.

The minimum price target from investment banks set by Bradesco is $10 per share. Scotiabank, on the other hand, values PAGS at $39 per share. According to the consensus, the fair market value of the stock is $17.4 per share, which implies a 88.92% upside potential.

The Brazilian real has steadily devalued against the US dollar over the years. The depreciation was particularly strong from 2011 to 2016. Although this trend is common to many emerging market currencies, it poses risks for investors.

PagSeguro earns most of its revenue from transaction fees. If monetary policy tightens further, the volume of transactions in the Brazilian economy could decline, which would affect the company's results.

The company is exposed to regulatory risk. For example, at the end of September, the Central Bank of Brazil equalised transaction fees on debit and prepaid cards and capped them at 0.7% (prepaid cards had previously been charged by issuers at 1.5%).

The company operates in an extremely competitive market. Its competitors include StoneCo, Mercado Pago, PicPay and even partly Apple and PayPal. Although Pagseguro is increasing its market share, further tightening competition could affect the company's results.