Simple and lightweight Oracle Corporation Stock Live Chart is a powerful free tool that allows you to easily conduct technical analysis online without downloading additional files and applications. In order to meet the needs of the most demanding technical analysts, you can find over a hundred chart analysis tools on our Oracle Corporation stock chart. You can also add any of 80 technical indicators directly to the chart online - in two clicks. The possibilities are endless!


Oracle Corporation Stocks Technical Analysis widget is a modern handy tool that shows ratings based on technical indicators data. The design of the widget is made in the form of a speedometer, thanks to which you can quickly see the results of the summary technical analysis. You no longer need to use many indicators for analyzing financial instruments, the widget will do it for you. In addition, all rating data are updated in real time. These technical indicators are used for technical analysis: Relative Strength Index, Stochastic, Commodity Channel Index, Average Directional Index, Awesome Oscillator, Momentum, MACD, Stochastic RSI, Williams Percent Range, Bull Bear Power, Ultimate Oscillator, Exponential Moving Average, Simple Moving Average, Ichimoku Cloud Base Line, Volume Weighted Moving Average, Hull Moving Average.

Oracle Corporation is one of the largest software developers in the world, specializing in creating software for working with databases and developing business applications. Oracle is also actively working in the "cloud" sphere and sells licenses - these items account for over 80% of the corporation's sales. Capitalization, even during the 2020 pandemic, did not fall below $100 billion; Oracle Corporation shares are in demand among both traders and investors.

The majority of Oracle shares are traded on the New York Stock Exchange (NYSE: ORCL). The IPO took place on March 12, 1986, 2.1 million shares were sold at a price of $15 per security. The underwriters were Alex Brown & Sons, Inc. and Merrill Lynch & Co. In the next 13 years after the IPO, 10 splits were carried out, using the proportions of 3 to 2 and 2 to 1. Due to this, the number of securities increased by 324 times.

Oracle shares are also traded on the stock exchanges of Great Britain, Switzerland, Austria, Germany, Chile, Brazil, Mexico and Argentina, but trading volumes in other countries do not exceed 1-2% of the NYSE.

Issued 3.068682 billion securities, each of which gives the right to vote at the meeting of shareholders. Over 60% of the shares are in free float.

The value of Oracle Corporation shares is taken into account when calculating a number of stock indices:

In Brazil, Oracle shares are included in the BM&FBOVESPA Unsponsored BDRX stock index.

The first dividends were accrued in April 2009. Since then, the company has paid dividends 4 times a year.

A Brief History of Oracle Corporation from Simple-Invest

Early in his career in IT, Larry Ellison, while working at Amtex, created his first database (for the needs of the CIA), the project was called Oracle. Soon he and his colleagues Bob Miner (Bob Miner) and Ed Oates (Ed Oates) decided to take a chance and continue to develop Oracle, but within a separate company. So in the summer of 1977, Software Development Laboratories was born.

In the late 70s, their development was very popular. In addition to the CIA, the US Air Force was among the customers.

In 1983, the 3rd version of the database was released, the C programming language was used in its development. A year earlier, the company was rebranded and the company became known as Oracle Corporation.

In 1984, Sequoia Capital invested in the project, the 4th version was released the same year, and the 5th version of the database was released the following year. In 1986, the company goes public, as part of the initial sale of securities, it manages to raise $ 31 million, which exceeded 50% of annual income. Since then, the price of Oracle shares on the stock exchange has risen by orders of magnitude.

In 1987, Oracle Corporation is recognized as the largest company in the world specializing in the creation and management of databases. There are more than 4,500 customers in 55 countries, sales exceeded $ 100 million. In 1989, Oracle is included in the S&P 500 index basket.

In 1990, the sloppy business crisis began, before which the company allowed customers to pay for access to software with delays. As a result, annual losses amounted to $ 12.4 million, capitalization decreased by 80%, the situation was aggravated by Ellison himself - his unsuccessful public speech provoked an outflow of investors.

The recipe for overcoming the crisis was a revision of the software sales model and a thorough assessment of the staff. Until 1992, about 10% of the staff of Oracle Corporation was fired, in 1992 losses were reduced to zero, at the same time the 7th version of Oracle was released.

In the first half of the 90s, Oracle began to actively absorb companies operating in related areas. In 1994, the DEC division was bought out (working on a relational database management system), in 1995 the Express company was absorbed.

There is a real war with competitors. And if Sybase simply could not stand the competition, then Informix was literally destroyed. In the late 90s, its head was accused of deliberately inflating the company's income. He ended up going to jail, and Informix broke up and was taken over by competitors piecemeal.

Since 1995, a new strategy for distributing Oracle products over the Internet has been in place. In 1999, InformationWeek named the Oracle Corporation product as one of the most important developments of the decade.

By mid-2000, the company was doing great - stock prices at highs, the popularity of software is growing. The collapse of dot-coms and the decline in interest in Oracle leads to a decrease in the value of securities by more than 4 times by 2002.

The company remains financially strong, enters the business applications market and competes aggressively against Siebel and PeopleSoft. As a result, PeopleSoft is absorbed in 2004 ($10 billion), and 2 years later Siebel follows the same path ($5.85 billion).

Ellison has earned a reputation as a tough leader who does not pay attention to public opinion. So, in 2007, John Wookey was fired from Oracle, he missed the deadline for the release of Fusion Application. From the absorbed companies, employees are massively dismissed, only key employees manage to keep their posts.

By its 30th anniversary, the company is reaching $18 billion in annual profits.

In 2010, Oracle buys Sun Microsystems for $7.4 billion. There is no antitrust violation, although skeptics warned about it.

Since 2011, the corporation has been entering the "cloud" market. Rightnowo, Taleo are bought to strengthen positions. Since 2013, Oracle databases are starting to work in the cloud.

Between 2012 and 2014, the court sought evidence of Oracle's guilt in a Google lawsuit for patent infringement when working with Java applications. It was not possible to prove the corporation's guilt, Google's appeals did not lead to anything.

By 2015, Oracle controls a third of the software development market. It is called one of the main competitors of Microsoft.

Since 2016, the corporation has been launching a program to support promising startups. After 2 years, the first fully autonomous database begins to work. In 2018, CERN scientists use Oracle solutions for data analysis, and in 2019, Oracle cloud solutions allow modeling the behavior of a diseased heart.

Through its aggressive takeover policy, Oracle has many subsidiaries, including:

The following factors strongly influence the value of Oracle Corporation:


The corporation remained financially strong even during the 2020 pandemic. Oracle shares remain in a long-term bullish trend. The growth in the price of securities and stable dividends make the corporation's shares an attractive investment object. 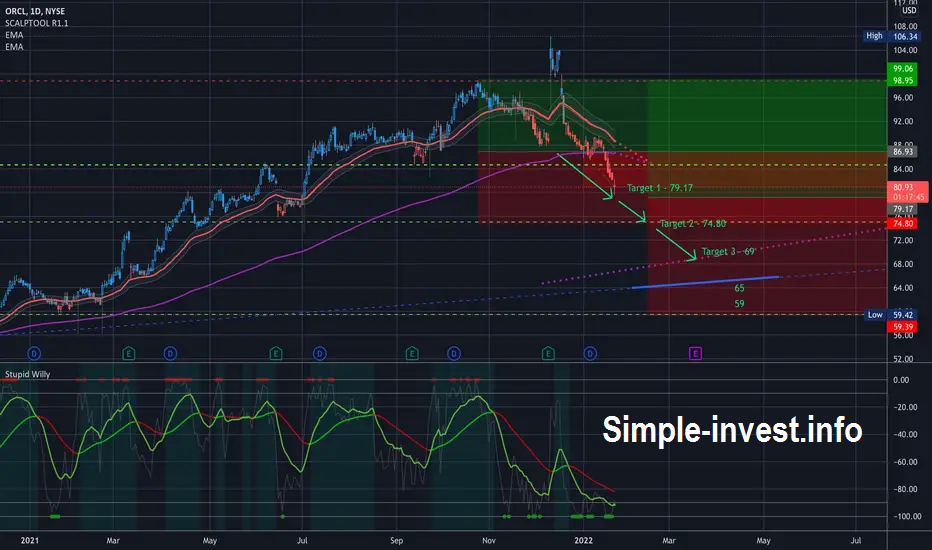 Alright… Here’s the ORCL battle plan --- looking to start a position at 79.17.
And then all of the targets below are add levels.
I’m really looking forward to this one.