Central Index Key (CIK): 0001045810 | ISIN: US67066G1040 | Symbol: NVDA | Type: Stock.
NVIDIA is an American manufacturer of GPUs, chips for smartphones and computers. The developer is considered one of the largest in the world. In 2015, about 80% of all video cards purchased by manufacturers of equipment were from NVIDIA, and in 2016-2017 the company showed a sharp increase in sales and revenue amid the growing popularity of cryptocurrency mining. NVDA stocks showed stable growth - in the period from 2018 to 2020, they almost doubled in price. By mid-February 2021, the price reached $ 614. Nvidia (NASDAQ:NVDA) stock price online, charts, stock price history, technical and fundamental analysis, reports, dividends, comments and more.


Simple and lightweight Nvidia Stock Live Chart is a powerful free tool that allows you to easily conduct technical analysis online without downloading additional files and applications. In order to meet the needs of the most demanding technical analysts, you can find over a hundred chart analysis tools on our Nvidia stock chart. You can also add any of 80 technical indicators directly to the chart online - in two clicks. The possibilities are endless!


Nvidia Stocks Technical Analysis widget is a modern handy tool that shows ratings based on technical indicators data. The design of the widget is made in the form of a speedometer, thanks to which you can quickly see the results of the summary technical analysis. You no longer need to use many indicators for analyzing financial instruments, the widget will do it for you. In addition, all rating data are updated in real time. These technical indicators are used for technical analysis: Relative Strength Index, Stochastic, Commodity Channel Index, Average Directional Index, Awesome Oscillator, Momentum, MACD, Stochastic RSI, Williams Percent Range, Bull Bear Power, Ultimate Oscillator, Exponential Moving Average, Simple Moving Average, Ichimoku Cloud Base Line, Volume Weighted Moving Average, Hull Moving Average.

The history of NVIDIA began in 1993 in California, USA. The company has three founders - Jen-Hsun Huang, Chris Malakhovsky and Curtis Pram. President and CEO - Jen-Hsun Huang. The headquarters is located in Santa Clara. Manufacturing facilities are located in Asia.

The main field of activity is the development of video chips, video cards, processors. The company's products are used in the field of video games, automotive (on-board computers), computing. Also Nvidia is engaged in research in the field of AI (artificial intelligence). The company has released a modular supercomputer that provides opportunities for the development of drones, cameras, robots. The main target market is the computer games industry.

Nvidia has a rich history of development. The three founders (Malachovsky, Pram, Huang) decided to start their own business over lunch - the partners came to the conclusion that changes in the computer technology industry are just around the corner, and they will be related to the automation and acceleration of hardware computing. Each of them had already worked in the industry at that time - Chris Malakhovsky and Curtis Praem worked as engineers in a software company, Jen-Hsun Huang was one of the leaders of an integrated circuit design company.

A Brief History of Nvidia Stocks from Simple-Invest

In 1993, their choice of direction (the creation of graphics processors) turned out to be correct - they caught the barely emerging trend of growth in the popularity of video games with three-dimensional graphics. Development in this direction promised a profit to the manufacturers of video cards. In the future, the constantly growing NVIDIA stock price convincingly proved their correctness.

1994 - strategic partnership with SGS-Thomson Microelectronics, which was able to provide Nvidia with factories in France for the production of microprocessors according to the desired process technology (0.5 micron).

1997 - the release of the RIVA 128 processor (NV3, 3D accelerator), 1 million copies were bought in 4 months of sales. The success was ensured by the relatively affordable price and high productivity.

1998 - release of RIVA TNT - a revolutionary product for that time, even more successful than the previous one.

1999 - Initial public offering of Nvidia shares on the NASDAQ exchange. The starting price was $ 12 per share, and a total of 3.5 million shares were put into circulation. On the first day, NVIDIA quotes rose to $ 19. As a result of the IPO, Nvidia raised about $ 42 million.

2000-2003 - Partnership with Microsoft: The company chooses Nvidia to develop software for the Xbox.

2002 - Nvidia is recognized as the fastest growing US company with approximately 31% of the PC graphics market, ahead of Intel and ATI.

2004 - NASA helped to recreate the surface of Mars.

2006 - the first payment of dividends to investors.

2010 - development of the basis for the fastest computers - the NVIDIA Tesla processor. The company decided to diversify its business, expanding its activities towards the development and production of high-tech solutions for the automotive industry.

2021 - Nvidia (NASDAQ: NVDA) will be executing a 4-to-1 stock split, and shares are expected to start trading on a split-adjusted basis on July 20.

A promising direction for Nvidia's development is cloud gaming. In early 2020, a service called GeForce NOW began operating, designed for different OSs and TVs. With its help, users can play games if the computer does not "pull" their parameters.

The direction on the development of which the company has focused - unmanned vehicles - is considered one of the most promising for the next decade.

Analysts mostly give positive forecasts for NVIDIA shares, since the demand for video cards with the Ampere architecture type is still higher than the supply. It is gaming GeForce - the company's advanced product that generates a significant share of the profit. The trend is expected to continue. It is likely that the price of NVIDIA shares will rise by 11% - 20%, according to various analysts.

In this technical blog, we will look at the past performance of 1-hour Elliott Wave Charts of NVDA. In which, the decline from 05 August 2022 high is unfolding as an impulse sequence and showed a lower low sequence within the bigger cycle from November 2021 peak. Therefore, we knew that the structure in NVDA is incomplete to the downside & should see more weakness. So, we advised members to sell the bounces in 3, 7, or 11 swings at the blue box areas. We will explain the structure & forecast below: 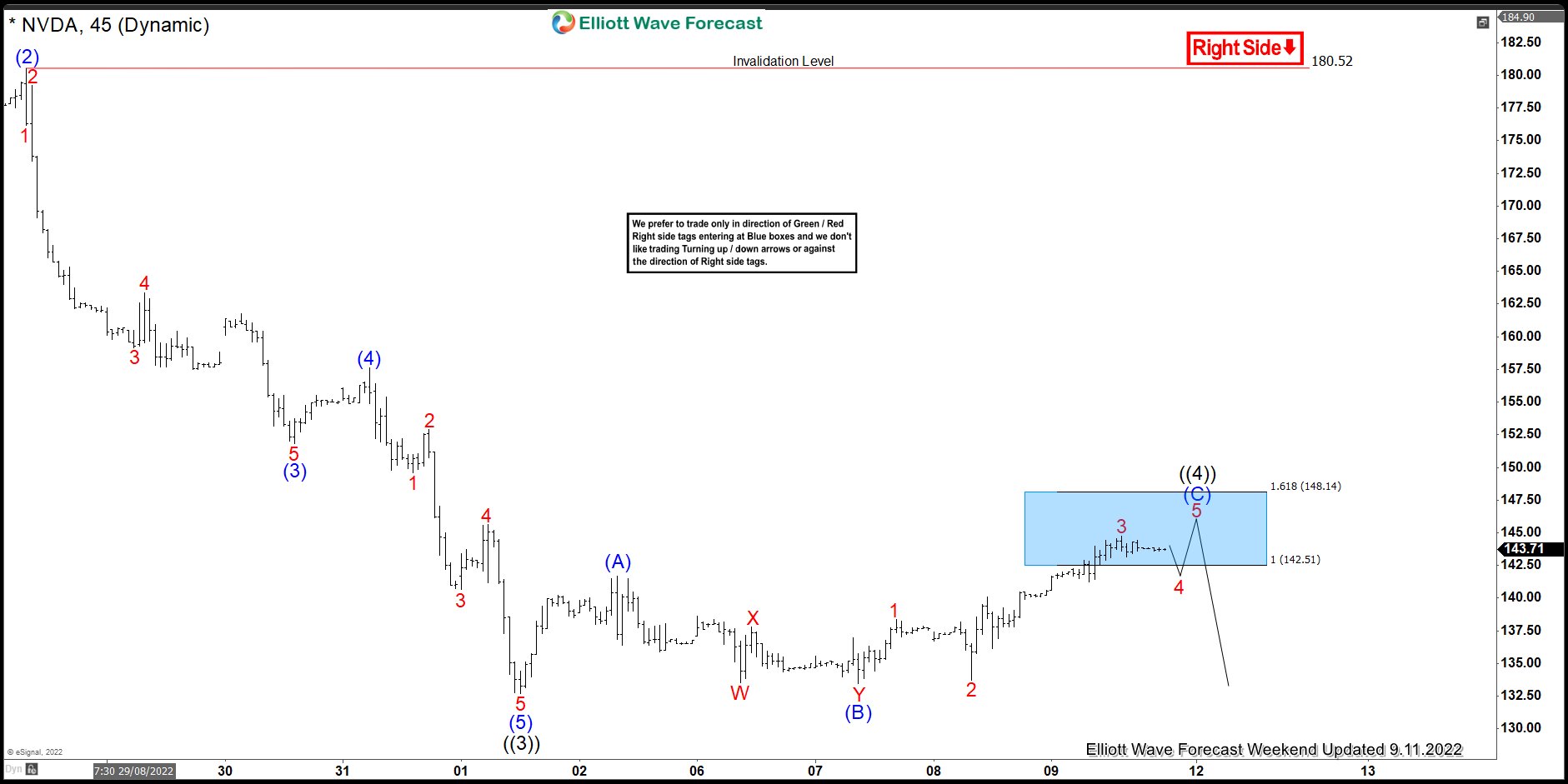 Then a pullback to $133.46 low ended wave (B) pullback and started the (C) leg higher towards $142.51- $148.14 blue box area from where sellers were expected to appear looking for more downside or for a 3 wave reaction lower at least. 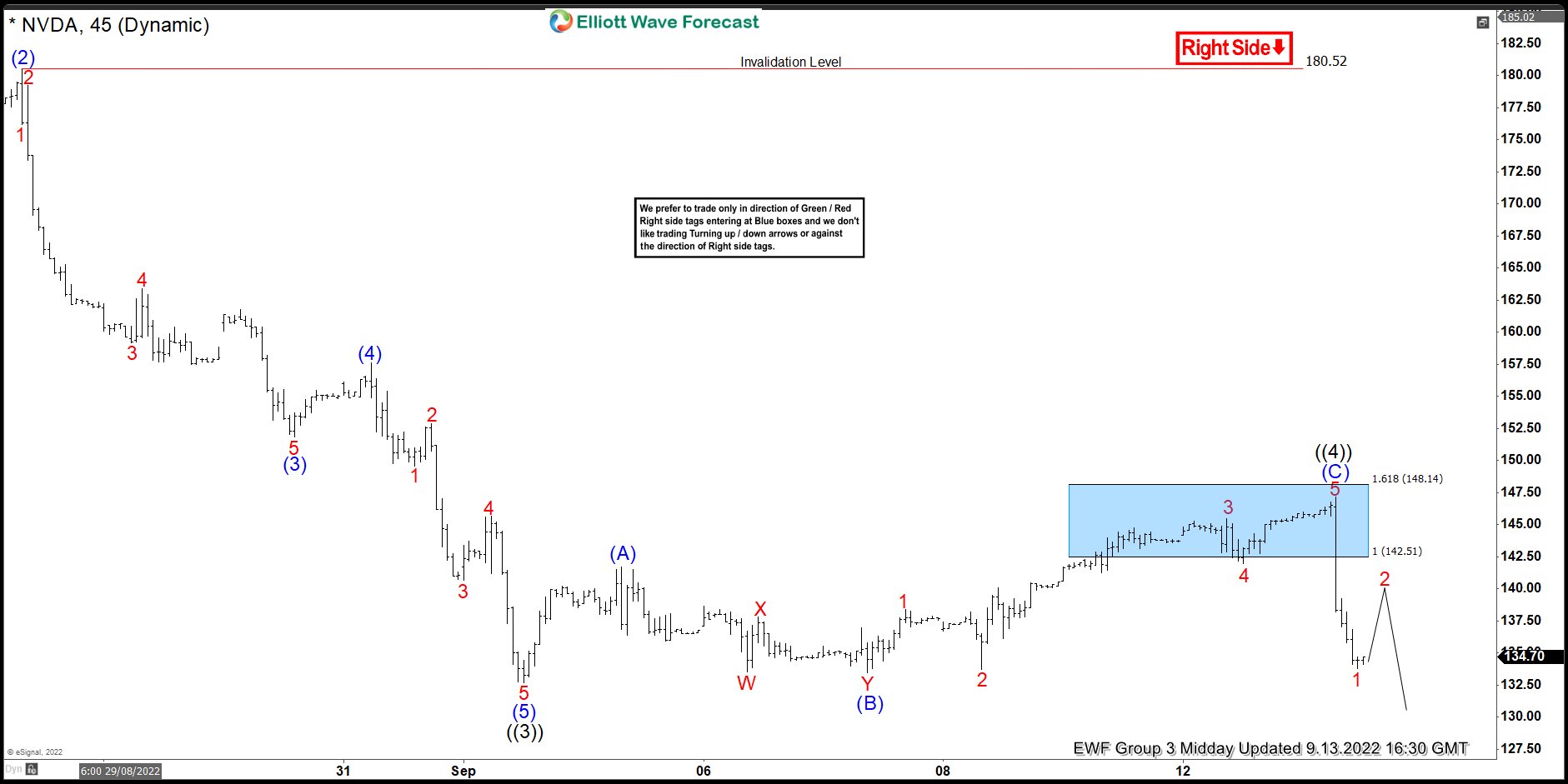 This is the Latest 1hr view from the 9/19/2022 Midday update. In which the stock is showing a reaction lower taking place from the blue box area allowing shorts to get into a risk-free position shortly after taking the position. Currently, the stock has already made a new low confirming the next extension lower towards $129.16- $123.54 area lower minimum before a bounce happens.

Success in trading requires proper risk and money management as well as an understanding of Elliott Wave theory, cycle analysis, and correlation. We have developed a very good trading strategy that defines the entry.

Hi there! Would you mind if I share your blog with my facebook
group? There's a lot of folks that I think would really enjoy your content.

Please let me know. Many thanks!

Attractive section of content. I just stumbled upon your
blog and in accession capital to assert that I
acquire actually enjoyed account your blog posts. Anyway I will be subscribing to your augment
and even I achievement you access consistently fast.

Thank you for your comment. Forgot to write that On July 19, the company split the stocks in a ratio of 4 to 1 - their value decreased from $ 750 to $ 187. The shareholders of the company will receive three additional stocks for each share in circulation on June 21. On July 20, trading in Nvidia shares will begin already taking into account the split.

So I counted everything according to the technique. Fibo, Waves, Candles, Patterns, Resistance and Support Levels + Moving Averages = $ 500 per NVDA stocks is coming soon.

Today we have Elliott Wave Analysis for Stocks Nvisia.

After a rapid two-year growth in a powerful impulse wave 3 (III) up to $ 210, the market has been asking for a logical correction for a long time.

The stock buyer overheated the market. Corrective fall in the stock price should take place in the 4th wave (IV) in the region of $ 120 per stocks NVDA. Also a powerful indicator of technical analysis MACD shows Divergence.

Then the price of Nvidia stocks will complete the 5th five-wave elliot pattern in the 5th (V) wave at around $ 300 per stocks. See the graph.

Hey! I do not understand
What is Divergence?

In one simple sentence, divergence is a mismatch between the direction of price movement and momentum (the rate of price change).

For example, we can often see how the price is still growing, making new highs, but the movement itself has already lost its speed, its impulsiveness and the MACD indicator shows a decline in the movement.

The loss of this very speed, this impulse is reflected in the indicator values opposite to the price. See the graph:

Thanks a lot. Now everything is crystal clear. Divergence is easy.

After that, the stocks price just collapsed to new lows.

Well done keep it up!