Simple and lightweight NIO Stock Live Chart is a powerful free tool that allows you to easily conduct technical analysis online without downloading additional files and applications. In order to meet the needs of the most demanding technical analysts, you can find over a hundred chart analysis tools on our NIO stock chart. You can also add any of 80 technical indicators directly to the chart online - in two clicks. The possibilities are endless!


NIO Stocks Technical Analysis widget is a modern handy tool that shows ratings based on technical indicators data. The design of the widget is made in the form of a speedometer, thanks to which you can quickly see the results of the summary technical analysis. You no longer need to use many indicators for analyzing financial instruments, the widget will do it for you. In addition, all rating data are updated in real time. These technical indicators are used for technical analysis: Relative Strength Index, Stochastic, Commodity Channel Index, Average Directional Index, Awesome Oscillator, Momentum, MACD, Stochastic RSI, Williams Percent Range, Bull Bear Power, Ultimate Oscillator, Exponential Moving Average, Simple Moving Average, Ichimoku Cloud Base Line, Volume Weighted Moving Average, Hull Moving Average.

NIO was founded in 2014 with global headquarters in Shanghai and R&D centers in Hefei and Beijing (China), San Jose (California, USA), Oxford (UK) and Munich ( Germany).

Nio's electric vehicle shipments are limited by the Chinese market (as of early 2021), but the company announced its plans for deliveries in Europe as early as the second half of 2021.

A special feature of Nio's work is offering its customers “battery as a service”, ie. buyers have the opportunity to purchase an electric vehicle at a lower price, but still pay a monthly fee for renting batteries.

Nio has dedicated stations in China that enable customers to quickly replace a dead battery with a full charge, saving time compared to recharging at a charging station.

Starting in the first quarter of 2022, Nio will begin generating revenue from a monthly payment for using an on-board computer-based fully automatic driving system.

Nio's IPO took place on September 12, 2018 on the NYSE with a price of $ 6.26 per share, as a result of which, the unprofitable manufacturer of electric vehicles at the time attracted $ 1 billion in investments and was originally valued at $ 6 billion.

Apart from the funds raised during the IPO, Nio had 10 funding rounds as of April 29, 2020, raising a total of $ 5.4 billion. Major Chinese companies, including Tencent Holding, were the leading investors.

What is Important for an Investor to Know?

NIO's shipments in the third quarter of 2021, which ended September 30, were higher than the forecast the company gave earlier this month.

NIO delivered 10,628 vehicles this September, including the completion of the first shipment of its SUVs to Norway. That's almost double the 5880 shipped by Nio in August and 125.7% more than last year.

This is a very upbeat signal for Nio investors, who were disappointed with the company's lower forecast for shipments in early September. Nio then lowered its third-quarter auto-shipments forecast from 23,000 to 25,000 EVs to 22,500 to 23,500, citing a global chip shortage problem.

Good day Traders and Investors. In today’s article, we are going to follow up on Nio Inc. ($NIO) forecast posted back in Feb 2022 and take a look at the latest count. Nio (NYSE: NIO) is a Chinese multinational automobile manufacturer with headquarters in Shanghai. It specializes in designing and developing electric vehicles. Nio tries to distinguish itself by innovating in two key areas which are battery technology and self-driving software. The company offers modular batteries for an easy swap in minutes. It also offers Battery-as-a-Service (BaaS) which allows customers to subscribe for car batteries rather than paying for them upfront.

Weekly Chart above suggests that NIO has ended the cycle from all-time low. The stock is now pulling back to correct that low within wave ((II)) in a 3 swing structure. The first leg of the correction wave (a) ended at $31.91, bounce in wave (b) ended at $55.13 and sellers appeared to resume the downside.

Wave (c) has managed to reach the blue box area ($18.73 – 1.19) where buyers are expected to appear and start the next leg higher but we can still see more downside in wave V of (c). We don’t like selling it. As far as the pullback stays above $1.19, we expect the stock to extend higher in the future.

There is a chance that the stock can remain supported and trade in 2nd dimension when the rest of the market continues lower. As long as price stays above 05/12/2022 low at $11.67, Nio can pullback in 3, 7 or 11 swings to correct cycle from May 12th before buyers appear and continue the rally. We like to remain long from the Blue Box area.

Globally, Nio shares have been in an uptrend since 2019. After a year of rapid growth, since January 2021, it went into correction, forming a downward channel. Last week, they came to the support level of $ 30 per share for Nio, stopping exactly below the median band of the descending channel. ⠀

In the near future, I expect further consolidation at the level of $ 30 above the median band. This is very important, as the security really wants to go up.

If you look at the chart from May 2020, you can see a bullish flag formation. So, in order to break through the channel (there is also a galaxy of moving averages) and further growth, it is advisable to stay above the median band. ⠀

At the same time, the stock of the fall is still preserved, up to the global trend line of 2019. If we break it, it will be bad and the “Flag” formation with further growth is most likely canceled. There is also an extremely important support level at $ 23, which we can easily reach if we break this global trend line. ⠀

In general, it is important to keep an eye on the NIO security in the coming weeks. The maximum target for the next week is $ 34-35. ⠀

Profits are expected to grow at 83.51% per annum. Assets exceed liabilities.

NIO has more cash than its total debt.

The company is in good financial health and has excellent future prospects.

Three months of unmitigated selling pressure on Chinese stocks have left their mark on Chinese electric-vehicle maker NIO (NIO). Since July 1, 2021, shares of Nio have lost over 30% of their value, notes Goldman Sachs analyst Fei Fang — but all bad things must come to an end.

And in Fang’s opinion, it’s now time to buy some Nio stock.

Why buy Nio now? In addition to the broad-based market selloff, after all, Nio suffers from some problems of its own making, in particular an August fatal car accident involving a Nio car driving with its “Navigate on Pilot” (NOP) autonomous driving mode on, and an early-September sales update that reduced expectations for sales volume in the face of “supply chain constraints.” But in Fang’s view, the story surrounding Nio could be about to change.

The next six months, argues the analyst, will see “strong volume expansion” at Nio as the company:

Profits should grow nicely as well, especially thanks to the ET7, which Fang points out is expected to be “China’s priciest car model launched by a domestic brand.”

Indeed, Fang argues that this is a strategic move for Nio, introducing a luxury electric car “in the same class with peer full-size premium sedans including Mercedes S-class and BMW 7.” The ET7 will be Nio’s fourth electric passenger vehicle introduced in China, and its first electric sedan. Importantly, it will also go a long way towards reducing range anxiety among electric car buyers. Fang notes that even the car’s basic 75 KwH battery pack will be good for 500 kilometers (300 miles) of range, while an extended range battery pack is good for 700 km per charge (420 miles), and a new “semi-solid state battery” could achieve as much as 1,000 km — 600 miles between chargings.

And of course, there’s Nio’s secret weapon: Its ability to offer “battery as a service,” whereby customers can buy a car and lease a battery separately, such that there’s never a worry that a battery will get old and fail to live up to its promised range throughout its lifetime. If that ever happens, a customer can simply… get a new battery and pop it into the car.

While the new Nio will be expensive for China, it should compete well against foreign luxury brands, inasmuch as it’s being priced closer to the sticker prices of Mercedes’ E-class and BMW 5-series automobiles. The analyst also observes that Mercedes and BMW seem to have done some research for Nio, inasmuch as they’ve scaled production of their E-class and 5-series models to about 10,000 units per month for China — equivalent to the 10,000 units that Nio moved in September.

All of this, in Fang’s view, supports an upgraded rating of “buy” for Nio stock, and a $56 price target, offering 55% upside potential for new investors.

For the third quarter, the company delivered a total of 24,439 vehicles, up 100.2% year-over-year. At the end of September, the total number of vehicles delivered by the company stood at 142,036.

Notably, Nio disclosed to have opened its NIO House and completed its first batch of vehicle deliveries in Norway on September 30, 2021.

On September 26, HSBC analyst Yuqian Ding maintained a Buy rating on the stock and lowered the price target to $47 (31.9% upside potential) from $69.

Ding expects Nio’s product cycle to pick up momentum in 2022 with new models. The analyst reduced the price target after factoring lower 2021 and 2022 earnings estimates and heightened competition in the EV segment.

Last week, another analyst, Bank of America Securities’ Ming Hsun Lee maintained a Buy rating on the stock with a price target of $62 (74% upside potential).

Overall, the Street is bullish on the stock and has a Strong Buy consensus rating based on 6 unanimous Buys. The average Nio price target of $63.85 implies upside potential of about 79.2%. 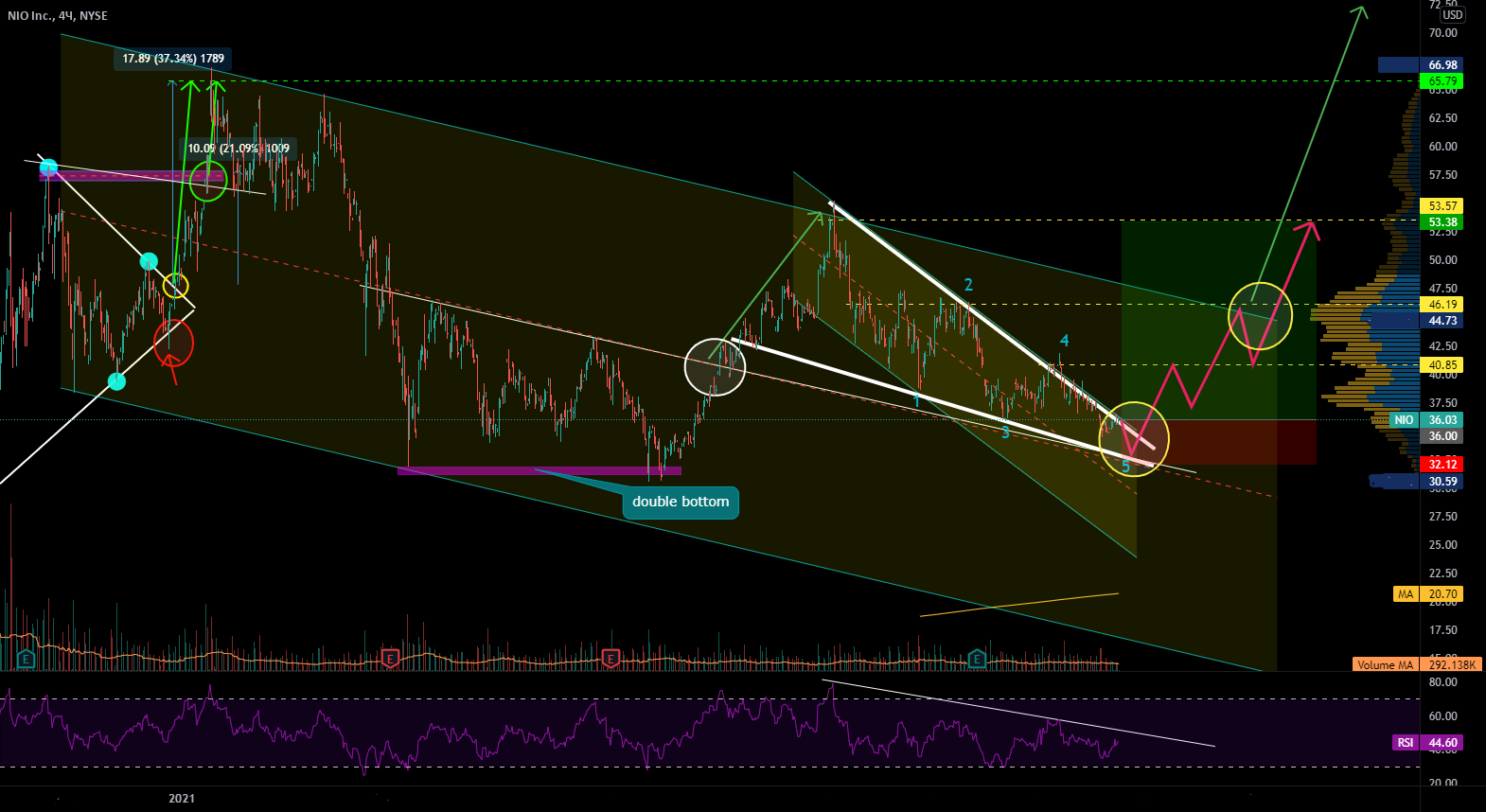 NIO's stocks price is close to completing a downward correction.

The price is in the correctional 5th wave, locally also in the 5th wave inside the falling Wedge, the exit from which leads to short-term targets 40.85 and 46.19.

A good point to set up stocks in the medium term.