Central Index Key (CIK): 0001065280 | ISIN: US64110L1061 | Symbol: NFLX | Type: Stock.
Netflix is an American subscription service that allows you to watch movies, TV series and TV shows legally and in high quality. Produces its own content. The company has transformed from a mail-order DVD rental service to a giant in the multimedia industry. Netflix now has over 200 million paying subscribers (which is about 30% more than a year earlier) and about a hundred new media products every year. NFLX stocks have been skyrocketing throughout 2020. Netflix (NASDAQ:NFLX) stock price online, charts, stock price history, technical and fundamental analysis, reports, dividends, comments and more.


Simple and lightweight NetFlix Stock Live Chart is a powerful free tool that allows you to easily conduct technical analysis online without downloading additional files and applications. In order to meet the needs of the most demanding technical analysts, you can find over a hundred chart analysis tools on our NetFlix stock chart. You can also add any of 80 technical indicators directly to the chart online - in two clicks. The possibilities are endless!


NetFlix Stocks Technical Analysis widget is a modern handy tool that shows ratings based on technical indicators data. The design of the widget is made in the form of a speedometer, thanks to which you can quickly see the results of the summary technical analysis. You no longer need to use many indicators for analyzing financial instruments, the widget will do it for you. In addition, all rating data are updated in real time. These technical indicators are used for technical analysis: Relative Strength Index, Stochastic, Commodity Channel Index, Average Directional Index, Awesome Oscillator, Momentum, MACD, Stochastic RSI, Williams Percent Range, Bull Bear Power, Ultimate Oscillator, Exponential Moving Average, Simple Moving Average, Ichimoku Cloud Base Line, Volume Weighted Moving Average, Hull Moving Average.

Netflix is an American subscription service that allows you to watch movies, TV series and TV shows legally and in high quality. Produces its own content. The company has transformed from a mail-order DVD rental service to a giant in the multimedia industry. Netflix now has over 200 million paying subscribers (which is about 30% more than a year earlier) and about a hundred new media products every year.

NFLX stocks have been skyrocketing throughout 2020. The streaming service has only benefited from the global situation. Due to the coronavirus pandemic and quarantine restrictions around the world, its popularity has grown exponentially, which could not but affect the Netflix stock price. As of March 16, 2020, the value of the security was $ 300, and exactly 4 months later, in July, the figure was already at $ 536.

Initially, the company was engaged in the rental and sale of films on discs. Now Netflix provides users with the opportunity to watch movies and TV series in the online cinema. Viewing is available on most modern devices - TVs, computers, smartphones, game consoles.

Much of the content on the site is produced directly by Netflix. The company has already managed to get the title of hitmaker - the next new items are eagerly awaiting, the records for views are being updated.

Netflix has earned unprecedented popularity due to its concept of work. There are no ads on the service, and the user gets access to the content by paying for a subscription. You can refuse at any time. Access to the platform is almost unlimited - from anywhere (except for some countries and regions), from any device. In addition, which especially pleases users, the series are released in full at once (the entire season is available for viewing).

A Brief History of Netflix Stocks from Simple-Invest

The history of Netflix began in the summer of 1997 in the United States. Reed Hastings and Mark Randolph, the founders, initially set out to make the rental of licensed content more convenient and accessible to Americans. People didn’t have to go somewhere to pick a movie; the new venture made it possible to get a disc in the mail. Netflix started with three dozen employees and about nine hundred DVDs.

The ability to catch trends and the mood of users before others determined the company's success. The site with reviews was actively developing, the quality of service improved. In 1999, the paid subscription business model was first piloted. The office is now located in Los Gatos, California. Reed Hastings is CEO of Netflix.

2002 - the company's shares appeared on the NASDAQ stock exchange. During the IPO, the starting price of Netflix shares was $ 15, the issuer attracted about $ 82 million in investments;

2003 - the service already has about 1 million subscribers;

2007 - the launch of the streaming service, the rental was preserved;

2013 - debut of the first Netflix series - "House of Cards", in the same year an agreement was reached with Marvel Television;

2014 - the announcement of the start of filming of the first full-length film;

2016 - the company released 126 of its own products, including cartoons, TV series, movies;

2017 - employees appeared to translate the subtitles of all the company's series into 20 languages;

2018 - the company received an Oscar for the documentary Icarus;

2019 - in January, the service was presented in 19 Oscar nominations, and as a result took away three awards (directing, cinematography, film in a foreign language - they were received by the work of Alfonso Cuarón Roma.

After the publication of the issuer's reports on January 19, 2021 for the fourth fiscal quarter of 2020, Netflix shares soared - their value increased by approximately 12% (to $ 565) amid news of the company's earnings and a positive outlook for the next quarters.

For the first quarter of 2019, Netflix's subscribers grew to 148 million. According to the data, about 8 million new users are added every quarter. Netflix predicted an increase in interest in the company, and in the report for the 4th fiscal quarter of 2020 was able to announce the growth of viewers - according to the service, about 8.5 million new paid subscribers were added, while the projected addition was about 6.5 million.

NFLX stocks tend to grow according to a number of major analysts, but it is important to constantly monitor the situation and assess the impact of various factors on the course.

It is important for investors to consider the development of the Internet TV market. Netflix has competitors (Amazon, Apple TV, etc.). Nevertheless, the service has ambitious plans. In the stated forecasts - the desire for a consistently positive free cash flow. Those. Netflix will no longer have to borrow money for financing, and the issuer plans to buy back shares for the first time in ten years.

What's up, always i used to check web site posts here early in the break
of day, as i like to find out more and more.

Magnificent beat ! I would like to apprentice while you amend your web site, how can i subscribe for a blog site? The account aided me a acceptable deal. I had been a little bit acquainted of this your broadcast offered bright clear concept

I believe this is among the most vital information for me.

And i'm satisfied reading your article. But want to statement on some common issues, The site style is perfect, the articles is really great : D. Excellent process, cheers

Nice post. I learn something new and challenging on sites I stumbleupon every day. It's always useful to read content from other writers and practice something from their websites.

Thank you a lot for sharing this with all of us you really understand what you're speaking about!
Bookmarked.

the close is good, at the moment we closed above 50 days at about $ 511-513 and close to the 200 daily $ 516. Oscillators give long signals on the clock. And most importantly, if on Monday, Tuesday we close above 520, or better than $ 526, then a golden cross will be formed. This is when the 50-day pierces the 200-day from the bottom up. This is a strong long signal. In April, after the report, there was a cross of death, it's the opposite when. And then the stock was pushed down. Now there is a good buyout on the average daily volume. So everything is good for the TA stock, the report is not bad either fundamentally. Here the longs are still ahead of everything.

Consider the Elliott Wave analysis of the popular Netflix stock. 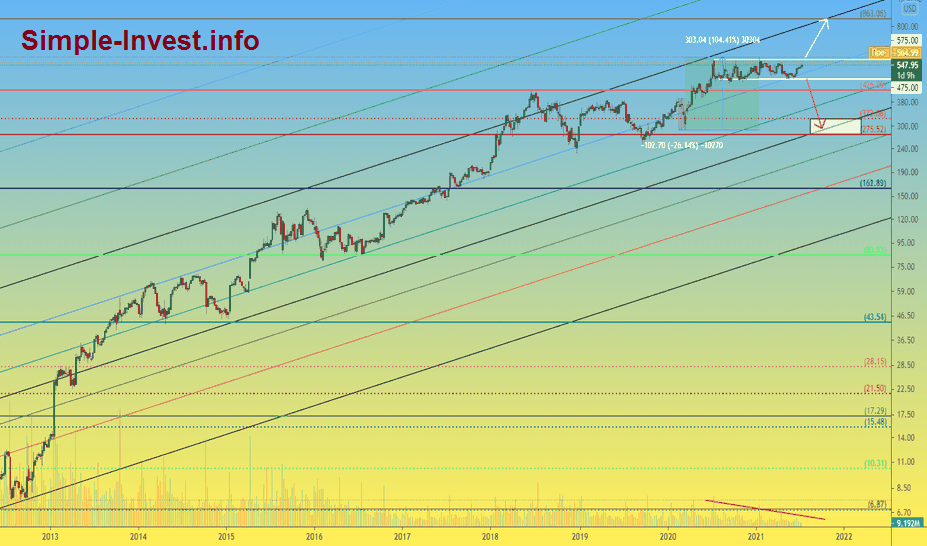 NFLX stocks price has been moving upward in a dynamic channel since 2004.

In 2012, the stocks price bounced off the lower border of the channel and the $ 8 mark and began an upward trend that continues to this day.

However, the crisis was good for the company. Everyone went home and bought subscriptions to their services, and Netflix's stock doubled.

The last 12 months, the price of NFLX stocks has been in consolidation in the corridor of $ 475-575.

Trading volumes are decreasing, which means that there will be a strong impetus for the stocks price in the near future.

There is a high probability that the momentum will be up, the price will break and consolidate above $ 575, and the next target will be $ 860 per Netflix stocks.

The first call that it is worth refraining from longs will be the approach of the stock price to $ 500.

Hello! Thank you so much for sharing your TA and opinion, your opinion is really very professional. For yesterday and today, more than covered the loss on Netflix at the expense of AMD and went into a good profit (well, on my scale). all the best to you and success in everything!