Simple and lightweight MGM Resorts International Stock Live Chart is a powerful free tool that allows you to easily conduct technical analysis online without downloading additional files and applications. In order to meet the needs of the most demanding technical analysts, you can find over a hundred chart analysis tools on our MGM Resorts International stock chart. You can also add any of 80 technical indicators directly to the chart online - in two clicks. The possibilities are endless!


MGM Resorts International Stocks Technical Analysis widget is a modern handy tool that shows ratings based on technical indicators data. The design of the widget is made in the form of a speedometer, thanks to which you can quickly see the results of the summary technical analysis. You no longer need to use many indicators for analyzing financial instruments, the widget will do it for you. In addition, all rating data are updated in real time. These technical indicators are used for technical analysis: Relative Strength Index, Stochastic, Commodity Channel Index, Average Directional Index, Awesome Oscillator, Momentum, MACD, Stochastic RSI, Williams Percent Range, Bull Bear Power, Ultimate Oscillator, Exponential Moving Average, Simple Moving Average, Ichimoku Cloud Base Line, Volume Weighted Moving Average, Hull Moving Average.

MGM Resorts International is an American company that manages the world's best resorts, hotels and casinos. The capitalization of Resort International has reached 19.05 billion dollars, which makes it one of the largest management companies in its field. Its shares are a good investment asset.

The maximum volume of shares is traded on the American New York Stock Exchange (NYSE) under the ticker MGM. Also, trading is available on the exchanges of Great Britain, Germany, Switzerland, Brazil and Mexico.

The company issued 493.281168 million securities, each of which gives the owner the right to vote at the shareholders' meeting. More than 80% of the shares are in free float.

The company pays dividends 4 times a year, the amount depends on financial performance. For example, the company's business was hit hard by the pandemic in 2020, so during this period, dividend payments were reduced by 60 times compared to a year earlier.

How to buy stock in MGM Resorts International

To buy company shares, you need to find a broker with access to the New York Stock Exchange, since the stock exchanges themselves do not work directly with clients.

Registration with brokers takes place online, as is the trading itself on stock exchanges. Replenishment of the brokerage account occurs instantly through bank cards or electronic wallets.

A Brief History of MGM Resorts

The prototype of the modern MGM Resort International was founded in 1987, but the foundation of the business was laid in 1969. This year, Kirk Kerkorian acquired MGM (Metro-Goldwyn-Mayer). Over the next couple of years, Kerkorian tries to solve his debt problems and is forced to sell shares of his company International Leisure at a discount.

In 1973, Kerkorian returned to the gambling industry by opening the casino hotel MGM Grand Hotel. After 5 years, the MGM Grand Reno begins to operate. In 1985, Kerkorian sells both successful Bally Manufacturing hotel-casinos, they are renamed Bally. At the same time, Kirk retains the rights to the MGM Grand brand.

In 1986, Kirk's Tracinda Corporation creates a subsidiary, Grand Name Co. Then it is renamed to MGM Grand, Inc., which in the future will become Resort International.

The first company operated by Grand Inc. was MGM Grand Air, established in September 1987. She was in charge of luxury flights between Vegas and New York. A year later, Sands and Desert Inn (hotels, which are also casinos) are acquired, the company spends $167 million on these purchases, Sands is resold after 2 years for $110 million.

In 1989, Kerkorian's company announced plans to spend $700 million to create a themed complex that would include a hotel with several thousand rooms. The Marina Hotel and Tropicana Country Club became the basis for the theme complex, previously the company acquired them for $93 and $30 million. The Desert Inn hotel-casino is being sold for $130 million to the parent company.

The ambitious project cost the company $ 1 billion. The complex was finally launched in 1993, but lasted only until 2002, as a result it was closed.

In 1994, the implementation of another large-scale project begins. A hotel-casino in the style of New York is being built; visually, the complex was supposed to resemble the panorama of the city. The project cost $460 million, the project was fully operational in early 1997.

Since the mid-90s, the company began to develop casinos outside the United States. During the period from 1998 to 2001, 4 casinos were opened in South Africa. There were plans to develop casinos in China and Australia, but they were not crowned with success.

In the late 1990s, the company bought out the Primadonna brand for $276 million in shares and $336 million in foreign currency. As a result, in 1999 the portfolio of MGM Grand Inc. replenished with 3 casinos and 2 golf courses.

At the beginning of the 2000s, after the relaxation of British gambling laws, MGM was trying to gain a foothold in the UK market. Wembley plc is acquired for $490 million. Later, under pressure from competitors, MGM Grand leaves this market.

In 2004, a number of small casinos were sold. For $215 million, 2 Golden Nugget casinos and MGM Grand Darwin are being sold for $140 million.

In the middle of the 2000s, MGM acquires the Mandalay Resort Group for $7.9 billion and becomes the largest gaming company in the world. True, this title belonged to the company for only a couple of months, later the conglomerate, including Harrah's Entertainment and Caesars Entertainment, became the world leader.

During the global crisis, the stock price of MGM Resorts International falls more than 20 times on the stock exchange. The company did not go bankrupt, but the value of securities did not recover to the highs even 10 years after the crisis. In the summer of 2010, instead of MGM Mirage, MGM Resort International appeared on the market.

In 2017, the PlayMGM brand is launched. The gaming component goes online, a bookmaker and a casino on the Internet begin to work.

Empire City Casino and Yankers Raceway are acquired in 2019 for $850 million. That same year, a partnership with Yahoo Sports begins to connect their online platforms to the service.

MGM Resorts International owns a number of subsidiaries, among them:

When predicting the price of shares, it is worth paying attention to the most important factors influencing the value:


Stock prices recovered moderately after the 2008 global crisis, but never reached their pre-crisis highs. Despite this, the company has potential for growth and remains financially stable even during the pandemic.

Investors include its shares in investment portfolios in anticipation of future growth and recovery of dividend payments.

BetMGM, which is jointly owned by MGM Resorts International (MGM) and Entain, said Wednesday it expects to achieve positive earnings before interest, taxes, depreciation and amortization in 2023.

MGM Resorts and Entain plan to invest about $450 million in BetMGM this year, the sports betting and iGaming operator said.

BetMGM expects to show full-year 2021 net revenue from operations of about $850 million and anticipates the figure rising to over $1.3 billion in full-year 2022.

BetMGM is expected to turn a profit next year, while revenue in 2022 is likely to exceed a previous forecast as the U.S. sports-betting joint venture between MGM Resorts (MGM) and Entain (ENT) expands into more markets and launches new products.

Britain's Entain said on Wednesday the joint venture, which operates online and in MGM casinos in the United States, is estimated to deliver over $1.3 billion in net revenue from operations in 2022 and would reach positive core profit in 2023. 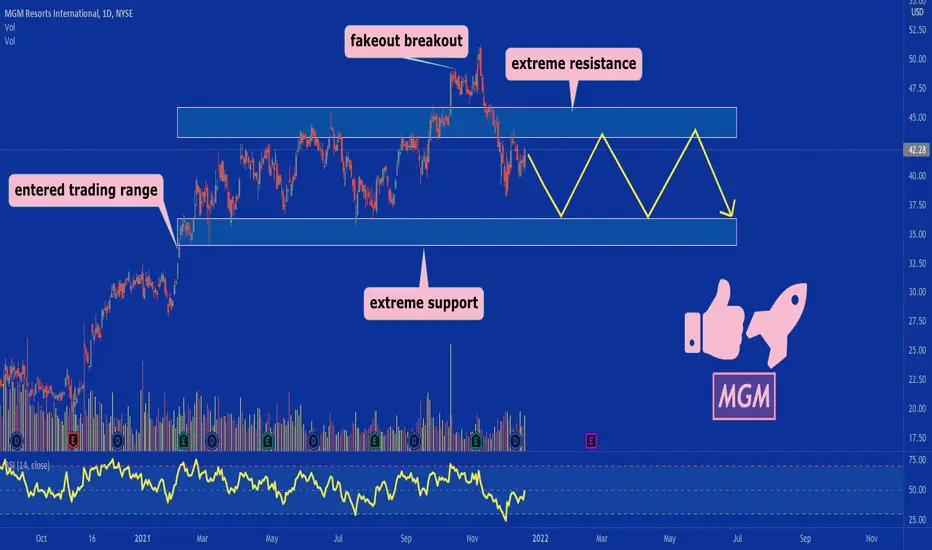 Considering its been stuck in this range for close to year, I wouldn't be surprised if we saw another year of the same price action.