CUSIP: 539830109 | ISIN: US5398301094 | Symbol: LMT | Type: Stock.
Lockheed Martin Corporation creates military and civil aircraft, the corporation is also developing avionics, various sensors, aerospace systems and protection systems, and work is underway in the field of space technology. The capitalization of the corporation is in the range of 105.96 billion dollars, and its shares are included in investment portfolios of various types. The main volume of securities falls on the American stock exchange New York Stock Exchange (NYSE) under the ticker LMT. Lockheed Martin (NYSE:LMT) stock price online, charts, stock price history, technical and fundamental analysis, reports, dividends, comments and more.


Simple and lightweight Lockheed Martin Corporation Stock Live Chart is a powerful free tool that allows you to easily conduct technical analysis online without downloading additional files and applications. In order to meet the needs of the most demanding technical analysts, you can find over a hundred chart analysis tools on our Lockheed Martin Corporation stock chart. You can also add any of 80 technical indicators directly to the chart online - in two clicks. The possibilities are endless!


Lockheed Martin Corporation Stocks Technical Analysis widget is a modern handy tool that shows ratings based on technical indicators data. The design of the widget is made in the form of a speedometer, thanks to which you can quickly see the results of the summary technical analysis. You no longer need to use many indicators for analyzing financial instruments, the widget will do it for you. In addition, all rating data are updated in real time. These technical indicators are used for technical analysis: Relative Strength Index, Stochastic, Commodity Channel Index, Average Directional Index, Awesome Oscillator, Momentum, MACD, Stochastic RSI, Williams Percent Range, Bull Bear Power, Ultimate Oscillator, Exponential Moving Average, Simple Moving Average, Ichimoku Cloud Base Line, Volume Weighted Moving Average, Hull Moving Average.

The Space segment consists of the research and development, design, engineering and production of satellites, strategic, and defensive missile systems and space transportation systems. The company was founded in 1961 and is headquartered in Bethesda, MD.

The company originated on March 15, 1995 after Lockheed merged with Martin Marietta. Shares of the combined company began to be traded on the NYSE since March 24, 1995. Over the past time, the value of securities has increased by orders of magnitude. The only split in history was held in 1998. A ratio of 2 to 1 was used with a corresponding adjustment in the value of securities.

Also, shares of the Lockheed Martin Corporation are available on the stock exchanges in Germany, Great Britain, Switzerland, Austria, Brazil, Mexico and Argentina. The Corporation issued 279.542050 million voting shares. More than 95% of securities are in free circulation.

In the US, these securities are included in the calculation of the stock indices S&P 500, S&P 100, DJ Defense, S&P 500 Industrials, NYSE Composite, DJ Large-Cap, S&P Composite 1500 Industrials, DJ Aerospace & Defense.

In 1995, Lockheed Corporation and Martin Marietta merged. The combined company is named Lockheed Martin. The company's shares begin trading on the NYSE 2 weeks after the merger, quotes are growing. The cost of the merger is estimated at $10 billion, the deal was partly subsidized by the state.

After the merger, acquisitions of other companies continue. Loral Corporation is bought in 1996 for $9.1 billion. In the 90s, Lockheed Martin experimented in the gaming market, developing a number of chips for the Sega Model 2 and Model 3.

In 2000, the corporation sells a number of aerospace systems divisions for $1.67 billion. Lockheed Martin Control Systems is sold the following year. In the same year, Lockheed Martin received an order for F-35 Lightning II aircraft. In 2006, it was possible to receive an order of $3.9 billion for the development of a CEV capsule for transporting astronauts to the ISS (later the name was changed to Orion).

In 2008, Lockheed absorbs Nantero, Inc., a year later it is acquired by Unitech. In 2014, Beontra AG, Industrial Defender Inc. is bought. The Pentagon is also ordering a space debris tracking system from Lockheed Martin.

Since 2018, Lockheed Martin has been working on supersonic weapons commissioned by the Pentagon. In 2019, NASA and Lockheed Martin are signing a contract to build at least 6 capsules that will be used to take astronauts to the moon. The volume of the contract is $4.6 billion.

The headquarters of the corporation is located in the American Bethesda. Lockheed Martin employs over 100,000 people.

When predicting the stock price, you should pay attention to the most important factors:


The stock price of Lockheed Martin on the stock exchange is growing in the long term. Given the steadily growing dividends, Lockheed Martin securities are a good candidate for inclusion in the basket of the investment portfolio.

The US aerospace and defense giant said it expects full-year 2022 diluted EPS of about $26.70, compared with the Capital IQ consensus of $26.20. Net sales for the year are seen at around $66 billion, compared with a the Street view of $66.4 billion.

Shares edged up 0.1% in premarket trading. 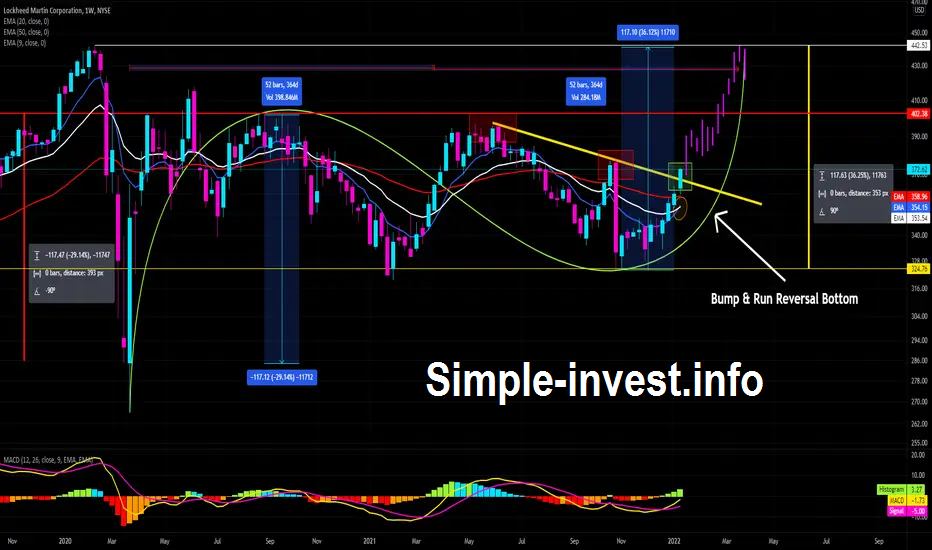 A reverse symmetry move to the $440 area could be in the cards.

Weekly MACD about to cross positive with a lot of room to the upside.

9wEMA crossing above the 20wEMA.

Not to mention the worsening situation in Ukraine providing a possible tailwind going forward. 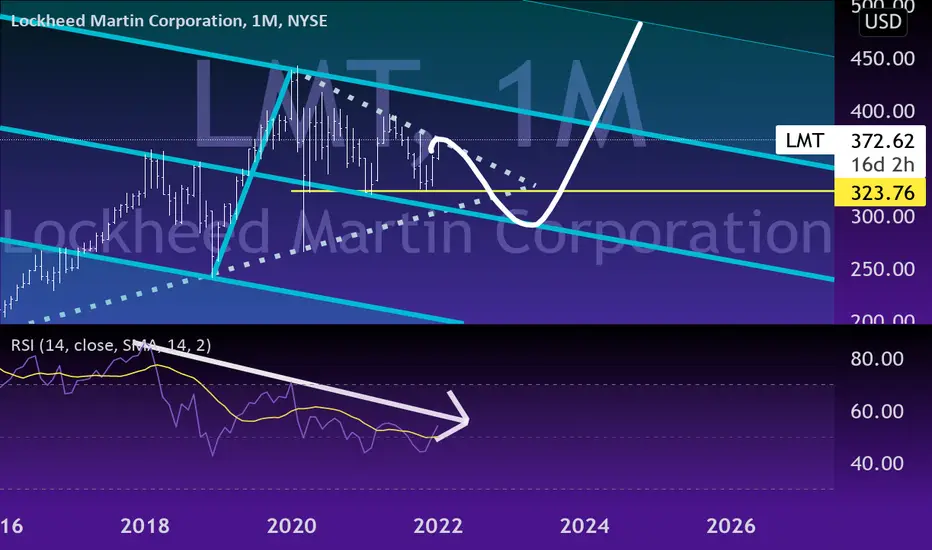 I'll be buying on any market corrections. If it does break the local downtrend can pop to top of channel .