Kinross Gold Corporation is engaged in gold mining and related activities including exploration, acquisition and reclamation of gold properties, mining and processing of gold-bearing ore. The company has operations in the United States, Brazil, Chile, Mauritania and Canada.

Reason 1: Expectation of Fed monetary policy easing
While gold is considered primarily an inflation protection tool, it is worth remembering that gold is denominated in dollars, which means its value is inversely related to the value of that currency, as can be seen in the chart below. Lower inflation in the US and the expected easing of monetary policy in 2023, which we described earlier, could lead investors to move into other currencies, reducing the current high value of the dollar and thereby increasing the price of gold.

In addition, as higher raw material, energy and labour prices translate into higher capital and operating costs for the company, the possible accelerated reduction in inflation in the first half of 2023 should have a positive impact on Kinross Gold Corporation's operating performance. 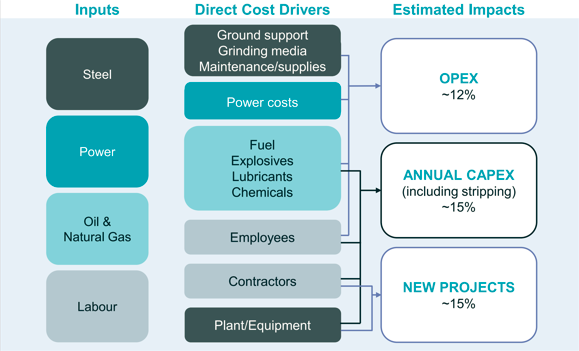 Reason 2. Promising projects
Kinross Gold Corporation announced on February 24 that it is taking over Great Bear Resources, adding high-grade assets to its portfolio in a leading mining jurisdiction. Great Bear has already drilled about 160,000 metres of the 200,000 metres planned for 2022 and reports that drilling results confirm a world-class high-grade deposit and gold mineralisation, which could mean the potential for a large, long life-of-mine complex there. We believe that the bulk of the positive impact of the deposit is not yet priced into the stock price: the market is waiting for the resource and technical report in February 2023, as well as news on the permitting to start an extended exploration programme in 2024.

The Tasiast 24k project is also progressing: major procurement has been completed, the necessary major equipment is already in place or will arrive by the end of the year, and construction work is underway. Once completed, the project is expected to increase the capacity of the Tasiast mine from 21 kt/d to 24 kt/d by mid-2023 and to extend its operational life by four years to 2033.

On 27 July 2022, the company announced that it will continue to develop its 70%-owned Manh Choh project. The project, targeting the second half of 2024, is expected to increase production by approximately 640 k Au eq. oz. over the life of the mine. As part of the project, a marshland use permit has already been granted in the third quarter.

Reason 3. Buyback programme and dividends
Additional support in terms of returning money to investors will be provided by the stock buyback programme announced in September, which will allocate up to 75% of excess funds (free cash flow after interest and dividend payments) to stock buybacks in 2023 and 2024, provided the debt load remains below 1.7x and there is no negative impact on the company's investment rating. As an example, in 2020, free cash flow after dividend payments was $857.9 million and 75% of that amount was $643 million (~12% of current market capitalisation).

The company's dividend programme, which currently has an annual yield of around 2.8%, will also help investors increase their payments.

in terms of operating margins, decrease from 36.8% to 9.7% due to high base effect and increase in cost of revenue from 66.3% to 75.1% due to inflationary pressure

Operating cash flow: down from $1.62 billion to $773.2 million due to lower profitability

Based on the results of the most recent reporting period:

Kinross Gold Corporation experienced a stressful operating environment in 2022, which negatively impacted financial results. However, since Q3, the company has continued to grow revenues year-on-year and inflationary pressures are on the decline. We believe that the worst may be over and the company will have good results in 2023.

The company's debt load is in an adequate range, which means that its financial stability is not a concern.

In terms of trading multiples, the company is undervalued relative to the industry median for all indicators except P/CF (18.50x vs. 13.01x).

Ratings of other investment houses
The minimum price target set by Credit Suisse is $4.40 per share. Beacon Securities, in turn, set a target price of $7.33 per share. According to the consensus, the fair value of the stock is $5.70 per share, which implies a 41.30% upside potential.

The decline in inflation could be slower than expected due to escalating geopolitical conflicts or deteriorating relations between OPEC and Western countries. Such developments will put further pressure on the market, which will also affect the company's stock price.

Kinross has projects that have uncertainty in them so far — if something goes wrong (difficulties in obtaining a licence, negative exploration results, etc.) this could cause stock price volatility.