Reason 1. Market opportunities for standby generators
Backup generators currently account for 91% of Generac's total revenue, while clean energy technologies account for only 9%. Although today the generator market is only valued at $4.43 billion, it is expected to reach $7.01 billion in 2030, at a compound annual growth rate (CAGR) of 5.34%.

Due to global warming, as well as the aging US energy system, power outages are becoming more frequent. This problem is particularly acute in regions prone to natural disasters, such as Florida, Texas and California. For example, in early autumn, California warned of power outages due to record heat waves. Due to the relatively frequent outages, there is a growing demand for standby generators as households seek energy independence.

Although Generac is the market leader in generators, the company's current penetration rate is only 5.5%. Meanwhile, in the aforementioned markets of Florida, Texas and California, the figure is only 3.5%, while in some states it is as high as 15%-20%. We expect Generac's penetration rate to continue to grow as demand for standby generators grows. According to management, a one percentage point increase in penetration could generate about $3 billion in additional revenue for the company.

Reason 2. Potential for solar energy storage solutions
Generac has significantly expanded its target market through organic growth and active M&A deals. According to the company, the target market was valued at $14 billion in 2018 and is expected to reach $72 billion by 2025, suggesting more than five-fold growth. The expected market expansion is driven by growth in the segments of Energy Technology and Smart Grid Ready. 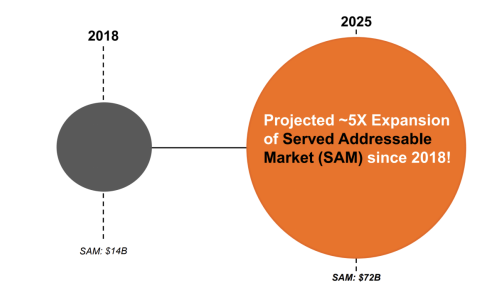 As noted earlier, clean energy solutions account for only 9% of Generac's revenue. However, the revenue mix is expected to change significantly in the coming years. During a recent investor day, the company predicted that the share of clean energy will reach 26% in 2024. The main growth driver is expected to be solar energy storage solutions. 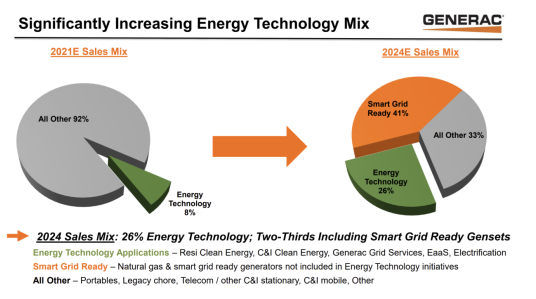 According to Vantage Market Research, the solar energy market is valued at $85.1 billion and is expected to reach $255.3 billion by 2028, which implies a compound annual growth rate of 20.1% over the forecast period. We expect Generac to be one of the beneficiaries of this growth through its advanced storage solutions.

Reason 3. A massive buyback programme
During Q3, Generac repurchased 536,600 common shares for $123.9 million and thus exhausted the limit of the past buyback programme. However, in July this year, the company's board of directors approved a new programme worth $500 million, which is to be implemented within 24 months.

With the company's current market capitalisation at around $6 billion, the programme reduces the number of shares outstanding by 8.3%. Given that the programme is within the stipulated time frame, we expect to see it implemented within the coming quarters. 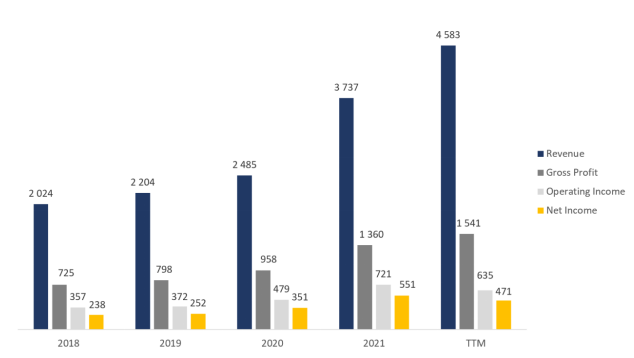 Since the IPO in 2010, Generac's revenue has grown at an average annual rate of 18%. Total sales are expected to grow 22%-24% year-on-year at the end of the year. We expect gross margins to gradually recover as the impact of inflation diminishes as it slows. Operating margins should also return to the upward trajectory as we overcome headwinds of additional operating expenses.

The main factor behind the decline in stock price in recent months has been a significant increase in inventories and the resulting decrease in cash flow. Thus, in the last reporting period TTM operating cash flow amounted to $19 million compared to $411 million for the year. Free cash flow to equity declined from $301 million to -$68 million.

The company's management attributed the growth in inventories to the cyclical nature of the business and provided a forecast that conditions should recover in the second half of 2023. The market seems to be sceptical about this kind of expectation. However, we remain optimistic about Generac because:

Generac has a strong balance sheet: the company has total debt of $1.36 billion, cash equivalents and short-term investments of $230 million and net debt of $1.13 billion, which is 1.4 times TTM EBITDA (Net debt/EBITDA — 1.39x).

The minimum price target from investment banks set by Roth Capital is $75 per share. In turn, Guggenheim values GNRC at $180 per share. According to the consensus, the fair market value of the stock is $152 per share, which implies a 45.9% upside potential.