How much is Ethereum today - Price chart in dollars (online) and price forecast. Where can you buy Ethereum (ETH) and how cryptocurrency works. The Ethereum chart shows the change in the value of the cryptocurrency in real time. Dozens of standard and custom indicators can be used for analysis. Ethereum is one of the most well-known cryptocurrencies on the market. Despite its popularity, it does not circulate on classical trading platforms, however, it is present on almost all cryptocurrency exchanges.

Simple and lightweight Ethereum Live Chart is a powerful free tool that allows you to easily conduct technical analysis online without downloading additional files and applications. In order to meet the needs of the most demanding technical analysts, you can find over a hundred chart analysis tools on our Ethereum chart. You can also add any of 80 technical indicators directly to the chart online - in two clicks. The possibilities are endless!


Ethereum Technical Analysis widget is a modern handy tool that shows ratings based on technical indicators data. The design of the widget is made in the form of a speedometer, thanks to which you can quickly see the results of the summary technical analysis. You no longer need to use many indicators for analyzing financial instruments, the widget will do it for you. In addition, all rating data are updated in real time. These technical indicators are used for technical analysis: Relative Strength Index, Stochastic, Commodity Channel Index, Average Directional Index, Awesome Oscillator, Momentum, MACD, Stochastic RSI, Williams Percent Range, Bull Bear Power, Ultimate Oscillator, Exponential Moving Average, Simple Moving Average, Ichimoku Cloud Base Line, Volume Weighted Moving Average, Hull Moving Average.

Ethereum is the second largest cryptocurrency in terms of capitalization in the world. It is believed that, unlike Bitcoin, Ethereum has significantly more potential. In addition to using it as an investment asset or a means of payment, it is suitable for creating blockchain-based services based on it, operating on the basis of smart contracts.

Thus, Ethereum facilitates the implementation of decentralized technologies, which increases the demand for it from both small businesses and giant companies, especially in the field of software development. Initially, the project was implemented precisely to create on its basis this kind of developments.

As is the case with most major cryptocurrencies, the Ethereum chart shows high volatility and can be quite unpredictable.

Its ability to demonstrate movements of 30-40% in a short time gives an advantage when using short-term strategies, including intraday and scalping ones. Long-term investments in an asset are also possible, but they are less common due to the difficulty of predicting the Ethereum rate.

Vitaly Buterin proposed the Ethereum concept at the end of 2013, at the same time the development of the blockchain began from scratch; in addition to Buterin, Anthony Di Loriot, Mihai Alize and Charles Hoskinson worked on this.

Simultaneously with the start of development in Switzerland, Ethereum Switzerland GmbH was created, later Stiftung Ethereum, a non-profit foundation, was created. Buterin explained the choice of the country by the legislation soft in relation to cryptocurrencies and the fact that in Switzerland there are a lot of banks and financial companies that might be interested in the new technology.

After the launch of the network, Ethereum did not immediately become popular, but over time it gained trust in the eyes of users. The sharp growth began after the ICO boom; it was ETH tokens that were actively used to participate in the initial sale of coins.

Now the price of Ethereum is an order of magnitude higher than the cost of the cryptocurrency in the first months after the launch.

Unlike other cryptocurrencies, the creators of Ethereum did not limit the maximum emission. A hard limit on the maximum number of coins would contradict the logic of the authors of the project.

Ethereum was conceived not as an alternative to fiat currencies or a competitor to Bitcoin, but as a universal exchange tool and for transferring familiar processes to the use of smart contracts.

Sooner or later, this approach will lead to ETH inflation, but practice has shown that it is controllable and does not collapse the rate.

Initially, the PoW consensus algorithm (ethash) was used, farms from video cards were used for mining. Later, the decision was made to switch to the PoS algorithm (proof of stake).

The speed of transaction confirmation is on the order of several minutes. The size of the commission is set by the user himself, if you do not indicate its minimum, then the confirmation speed is less than a minute.

A key feature of Ethereum is the ability to use smart contracts to ensure that the parties to the transaction honestly fulfill their obligations. The technology itself was described in the mid-90s, but only with the advent of Ethereum did it become possible to implement them.

A smart contract is a program code in which the obligations of the parties are indicated in the “if-then” format. Due to this, using smart contracts, you can not only implement exchange operations, but also transactions for the purchase of various assets.

For example, indicate in a smart contract that ownership of real estate is transferred to party B after she transfers to party A a specified amount in ETH tokens or in another cryptocurrency / fiat currency.

Due to standardization (creating a standard code of a smart contract for the most common operations), you can significantly reduce the cost of supporting transactions. The intermediary between the parties is eliminated, they interact directly.

Ethereum has long since emerged from its "promising newbie" state. The usefulness of cryptocurrency and smart contract technology has been proven by time, large players are interested in it, so Ethereum is stable.

As for the long-term outlook for the Ethereum exchange rate, the future looks bright for this cryptocurrency. Large players are interested in this platform, which means that the growth rate of ETH is constrained solely by the level of implementation of blockchain technologies in the world.

High volatility allows you to make money on Ethereum not only through long-term investment, but also through active trading.

Currently, several services operate on the basis of Ethereum, such as the Gitcoin developer community, the Cent social network, the Veil trading platform and many others.

On the Ethereum subreddit, a community member raised the topic of ETH betting and its difficulties. According to the user, it took him an entire weekend for everything to work. A user said this might be something that people with "tight" schedules cannot accept.

In response to the thread, another community member also shared his ETH betting experience and mentioned the origins of Ethereum. The user noted that in those days, interacting with the blockchain was also difficult before more user-friendly options appeared. The community member also stressed that setting up the node requires "more effort than we might expect the average person to put into it."

In addition to configuration difficulties, the issue of bandwidth consumption was also raised. Due to the high bandwidth consumption, the user said there was a risk of ISP shutdown. Another user mentioned that the costs of exceeding your internet data cap could possibly kill any staking gains.

The ETH/USD pair has bounced from the demand zone and is heading higher towards the nearest technical resistance located at $1,358 - $1,378. The momentum is strong and positive, so ETH bulls are getting ready to follow the recent BTC rally.

Trading Outlook:
The Ethereum market has been seen making lower highs and lower low since the swing high was made in the middle of the August at the level of $2,029. The key technical support for bulls is seen at $1,281 as a part of the demand zone located between the levels of $1,252 - $1,295. If the down move will be extended, then the next target for bears is located at the level of $1,000. 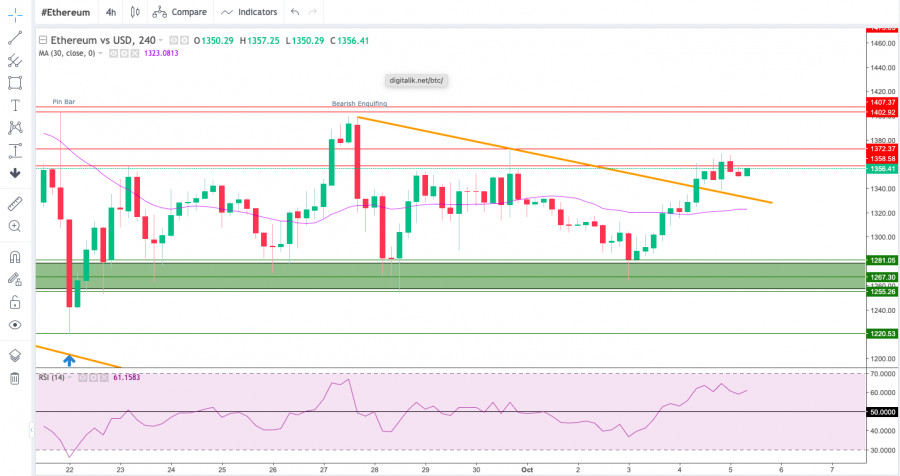 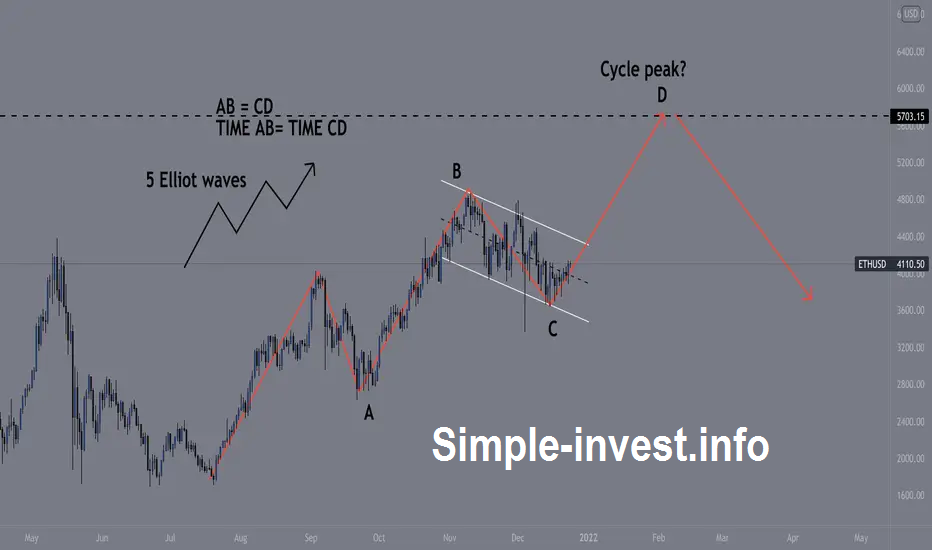 Based on the Elliott Wave Theory we could draw this chart.
This shows a possible outcome of 5700$ per ETHUSD.
AB TIME = CD TIME, a strong correction within this period would most likely invalidate this outcome.
Possible Bull flag scenario.

Just my view on the coming weeks, do your own research;)