How much is DogeCoin today - Price chart in dollars (online) and price forecast. Where can you buy DogeCoin (DOGE) and how cryptocurrency works. The DogeCoin chart shows the change in the value of the cryptocurrency in real time. Dozens of standard and custom indicators can be used for analysis. DogeCoin is one of the most well-known cryptocurrencies on the market. Dogecoin today holds the title of one of the oldest currencies in the crypto world, not tied by smart contracts, controversial decisions, constant community feuds and uncontrolled forks.

Dogecoin can be bought in a few seconds on the EXMO cryptocurrency exchange.

Simple and lightweight Dogecoin Live Chart is a powerful free tool that allows you to easily conduct technical analysis online without downloading additional files and applications. In order to meet the needs of the most demanding technical analysts, you can find over a hundred chart analysis tools on our Dogecoin chart. You can also add any of 80 technical indicators directly to the chart online - in two clicks. The possibilities are endless!


Dogecoin Technical Analysis widget is a modern handy tool that shows ratings based on technical indicators data. The design of the widget is made in the form of a speedometer, thanks to which you can quickly see the results of the summary technical analysis. You no longer need to use many indicators for analyzing financial instruments, the widget will do it for you. In addition, all rating data are updated in real time. These technical indicators are used for technical analysis: Relative Strength Index, Stochastic, Commodity Channel Index, Average Directional Index, Awesome Oscillator, Momentum, MACD, Stochastic RSI, Williams Percent Range, Bull Bear Power, Ultimate Oscillator, Exponential Moving Average, Simple Moving Average, Ichimoku Cloud Base Line, Volume Weighted Moving Average, Hull Moving Average.

Started as a harmless experiment, a cryptocurrency created by enthusiasts for enthusiasts has managed to conquer the world, survive three crypto booms, and maintain its price and development prospects. Dogecoin today holds the title of one of the oldest currencies in the crypto world, not tied by smart contracts, controversial decisions, constant community feuds and uncontrolled forks. How DOGE was able to achieve such popularity, and what does it represent from a technical point of view.

Coin based on the modified Litecoin protocol. Initially, DogeCoin completely copied the parent cryptocurrency in blockchain building, mining confirmation, and was a typical fork.

The main difference was the atypical attitude of the community towards him. Created as part of a dog meme, it quickly gained popularity and proved its worth.

At the time of 2013, before the serious development of Ethereum technology and smart contracts, the total turnover exceeded Bitcoin.

During the crypto boom of 2018, the price broke through the all-time high three times, and even became a financial haven after dumping ERC-20 tokens. Nevertheless, after the decline of the crypto boom, the quotes returned to standard indicators, and fully returned the correlation with the parent cryptocurrencies.

The system uses standard Proof-of-work as the formation of emission. This means that it has all the disadvantages of the first generation blockchain:

Due to the increasing complexity of mining, the speed of generation and decryption decreases exponentially. There are over 125 billion units in circulation today.

In 2018, the company provided Dogethereum demo technology to convert current coins into ERC-20 contracts. According to the developers, the technology is designed to combine the first generation Blockchain with Ethereum-based cryptocurrencies.

How much is Dogecoin worth?

Due to the high rate of issue associated with low computational complexity, the cost has never been high. As of early 2022, the cost hovers around $ 0.19 per coin.

You can see the current DOGE / USD chart on the interactive chart above.

The processing time for financial transactions is from 6 minutes, and at the moments of peak loads, additional queues and changes in the reward to miners for the transfer in the form of priority nodes are possible, which can greatly increase the cost of the transfer.

The award was established in 2014 and is 10,000 Doge, which is equivalent to approximately 26 GBP at current value. The speed of finding blocks when using powerful Bitmain LTC, sharpened for the Scrypt algorithm, is approximately 1 block per minute when combined into pools. The remuneration is distributed in proportion to the invested computing power.

In terms of mining costs, it is about 1000 times less efficient than LiteCoin. Because the LTC decryption reward is roughly $ 2,500, with a commensurate computational complexity. And nevertheless, enthusiasts do not despair, tk. continue to count on serious pumping and expansion of the entire infrastructure of the project, as a result of which they want to get their Xs, which already happened in 2018.

The history of the formation of the "dog blockchain" is unpretentious and simple. In fact, it was one of many Bitcoin and Litecoin forks created between 2011 and 2014. Against the background of the crypto boom, when BTC grew over $ 100 per unit, Australian Jackson Palmer came up with an unusual idea - to create a positive image of crypto projects in the eyes of people who are not interested in the world of cryptocurrencies at all.

Then, together with American Bili Markus, they decided to create an easy-to-understand cryptocurrency with a fun logo. Given the peak in popularity of the meme in 2013, the choice was clear.

Interesting fact: with the second coming of the meme, the popularity of the project for a short period of time increased several times. After that, his graph returned to its original values.

Because at that time, the enthusiasts did not have any mathematical background, they chose the litecoin model as a basis.

The release took place on December 6, 2013, and a full-fledged announcement, with a wallet, Scrypt algorithm and a dog mascot, was released two days later - on December 8, 2013.

The DOGE user community is recognized as one of the friendliest in the crypto world. First of all, they are known for their charitable actions aimed at settling the consequences in cities affected by environmental disasters, working in social networks, and changing the Internet infrastructure.

Moreover, it is actively used and unofficially integrated into the social network Facebook. It is used to pay content makers. The low cost combined with the fixed transaction fee of 1 DOGE has made it one of the most popular coins with the friendliest community.

At the beginning of its journey, the community formed The Dogecoin Foundation, which is engaged in charity events. The most famous fees included:

The activity of the community and the significance of all that is happening is confirmed not only by the charitable activities of the built company, but also by the fact that the token, which was originally created as a piece, is now traded on almost all well-known crypto platforms, including decentralized exchanges.

In addition, one should not forget about periodic updates in the kernel code, connecting smart contracts, attempts to solve the scaling problem, and a fixed rate of coin emission. With unlimited generation of coins, they allow you to avoid an uncontrolled rise in price, and do not require a dramatic increase in the complexity of decryption for mining.

If we consider this asset in the framework of the analysis, then it is worth mentioning that this is a first level fork, fully correlated with BTC. It is not associated with frozen ERC-20 contracts, which makes it possible to fairly accurately assess its liquidity in relation to other cryptocurrencies.

With an absolute low liquidity (the total value of all Dogecoin coins does not exceed USD 0.5 billion), it has a good indicator of average liquidity. Due to the low price and the large amount of currency in use, it is almost impossible to move with volume trades and create an avalanche impulse.

When trading, focus on key levels and moving averages. Consider Bitcoin's lagging correlation coefficient and trade only on official exchanges such as EXMO.

As for the fundamental analysis in the long term, according to the data on the development of the project, it may have a serious inflow of capitalization with the integration of the Dogethereum technology, which will allow the formation of forks and creating an internal infrastructure.

Since the asset is more than half funded from non-fiat sources, its correlation to btc-rates is close to 100%.

How to buy Dogecoin?

The best way to acquire and store cryptocurrencies will be the EXMO exchange, which has the following advantages: resistance to DDOS, the ability to quickly convert to fiat and vice versa, and a high level of security.

Dogecoin is one of the most significant coins on the market today. Despite the small total funding, it has a stable community, high relative liquidity, and good mining profitability.

In addition, the team has excellent prospects, taking into account the possibility of integrating their project in the direction of smart contracts, which will allow in the future to use the coin not only as a means of payment, but also to form entire subsystems on its basis.

Dogecoin can be bought in a few seconds on the EXMO cryptocurrency exchange. 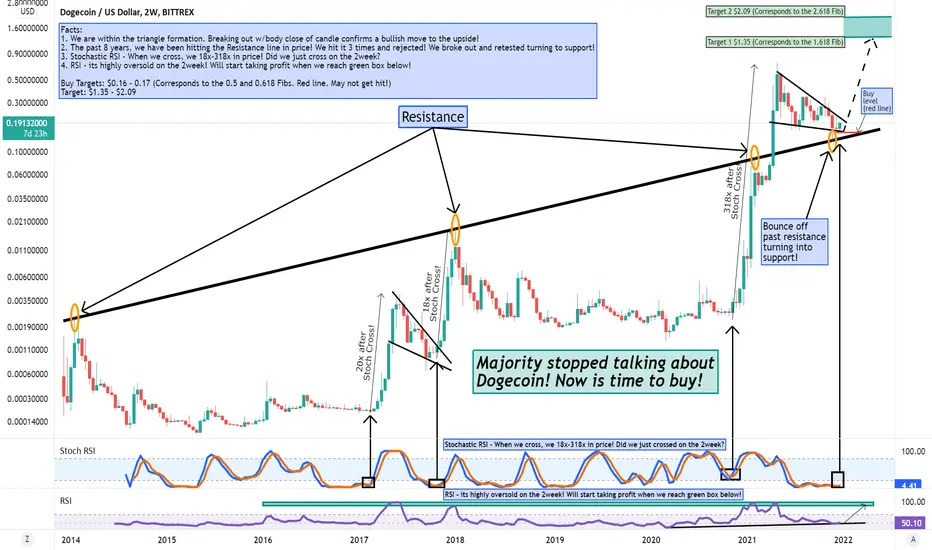 Majority stopped talking about Dogecoin . The hype is gone, and the fear is up!

Before reading, get rid of your moonboy mentality and no emotions for dips/corrections! Cannot rule bearish scenarios! Dips are for buying!!

People are so focused on the hourly/ daily timeframe that they get emotional on every dip! Take a step back to the weekly/ monthly timeframe and see why I'm so bullish now. Stop looking at the short-term dips/rise. Short term is irrelevant for the move that is coming!

You can't be emotional in these markets (stocks, forex, crypto, real estate, etc.). You will lose this game following the news and doing what the majority does. News creates emotions. Everything you need to know are on the charts. News are manipulated by the elites, and they take advantage of our emotions. Stop listening to the news and pay more attention to the charts. Don't follow the majority, because the majority will lose in the end! Also, don't buy the hype when everyone is buying. instead buy the fear when everyone else is selling

Everything is on the chart! Cryptocurrencies are on the verge of exploding higher. Dips/Corrections are normal and needed in a bull market and are buying opportunities! Huge gains opportunity in the coming months! Never trade blindly. Use multiple indicators to make calculated decisions. Trade with no emotions!

Facts:
1. We are within the triangle formation. Breaking out w/body close of candle confirms a bullish move to the upside!
2. The past 8 years, we have been hitting the Resistance line in price! We hit it 3 times and rejected! We broke out and retested turning to support!
3. Stochastic RSI - When we cross, we 18x-318x in price! Did we just cross on the 2week?
4. RSI - its highly oversold on the 2week! Will start taking profit when we reach green box below!

"Markets are a device for transferring money from the impatient to the patient. - Warren Buffet

"Show me the charts, and I'll tell you the news." - Bernard Baruch

"The secret to investing/trading is figuring out how rich you want to be and how poor you're willing to become."

"If you want to live like the 5% of the population who are hugely successful, then don't act like the 95%!"