Capri Holdings Ltd. (CPRI) designs, distributes and markets premium women's and men's clothing, footwear and accessories under the Versace, Jimmy Choo and Michael Kors brands. Capri is one of the ten largest companies in the luxury industry. The company was founded in 1981 and until 2018 was known as Michael Kors Holdings Ltd. The head office is located in London.

During a conversation with analysts, Jean-Jacques Guiony, LVMH's chief financial officer, pointed out that the consumer behaviour of the company's target audience is not aligned with the general economic environment. In other words, while poor and middle-class consumers are cutting back on spending, affluent consumers are actively spending, and luxury companies can raise prices without immediately hurting demand.

According to Federica Levato, partner at Bain & Co., 2022 could be a record year for the luxury industry. There are two main factors contributing to the growth of the industry:

The resilience of the luxury industry was already noted during the Great Recession of 2008-2009. Although the level of globalisation was then much lower and Western consumer culture had not yet fully taken hold in Asian markets, companies experienced only a slight decline in sales and some even showed growth. 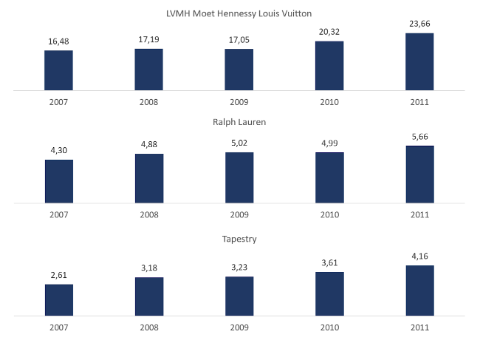 The long-term outlook for the industry also looks favourable. According to a Bain & Co. study, the global luxury goods market is valued at $283 billion and is expected to show a compound annual growth rate of 6%-8% through 2025. 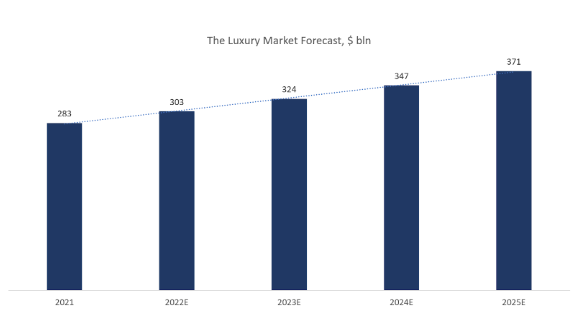 Chinese consumers are expected to dominate and their global market share is expected to grow from 21% to 40%-45%. Capri has significant potential in the Asian market. Before the pandemic, Asian countries accounted for about 16.4% of total revenue. Due to the Zero-COVID policy, sales in Asia fell by 20% in the last reporting period. However, the easing of covid restrictions in China should help to restore growth.

One of the key trends is market consolidation. Whereas in 2000 the top seven brands accounted for 17% of the market, in 2021 their share will reach 33%. However, the industry is still fragmented, meaning that we are likely to see a string of mergers and acquisitions in the future. 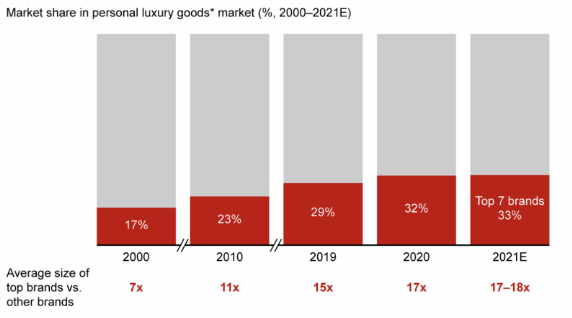 Consolidation of the luxury market

We expect Capri to be one of the beneficiaries of favourable market conditions and observed trends. On the one hand, Capri is able to expand its brand portfolio as part of market consolidation, as it has sufficient financial resources and experience in executing efficient M&A deals. On the other hand, Capri itself could become a takeover target, as it is strongly out-sized compared to giants such as LVMH, Hermès, Kering and Richemont.

Capri unveiled ambitious plans for its brand portfolio at its latest investor day. Management is forecasting revenues of $8 billion compared with $5.68 billion at the end of 2022. Versace is expected to account for 25% of sales, Jimmy Choo for 12.5% and Michael Kors for 62.5%. 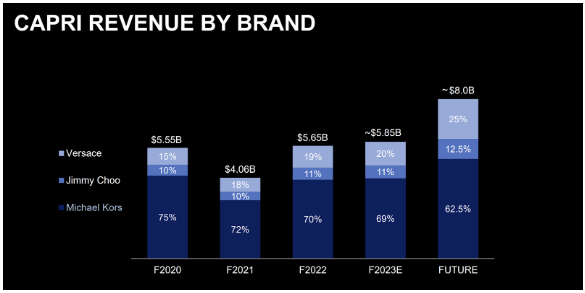 The company's growth strategy is as follows

Versace expansion. In 2022, the brand reported revenue of $1.08 billion with 209 retail locations. The management plans to bring Versace's revenue to $2 billion with 300 outlets. Thus, revenue per outlet should grow from $5.2 million to $6.7 million.

Jimmy Choo expansion. The brand's revenue should grow from $618 million at 237 locations to $1 billion at 300 locations. Thus, revenue per point of sale should increase from $2.6 million to $3.3 million.

The premiumisation of Michael Kors. The company aims to reduce supply and create a shortage of Michael Kors products. Whereas in 2015 the number of wholesale outlets was 4,038, by the end of 2022 the number had reached 2,742. As a result of this policy, the brand's revenue has also fallen significantly. However, by focusing on retail and e-commerce, Michael Kors plans to increase its revenue to $5 billion.

Management's plans appear to be rational. Capri still has considerable room for extensive growth and the opening of new outlets. By the end of last year the company had 1,271 shops. In comparison, the LVMH group has more than 5,500 shops worldwide. Capri has a relatively low level of penetration in Asia. The region accounts for 16.4% of its total revenue, while Tapestry has 33% of sales in Asia and LVMH has 41%.

Intensive growth (revenue per point of sale) can be achieved through the growth of e-commerce. It is expected that:

Thus, the company's management expects the share of online sales to be around 25% in the future. This forecast looks rather conservative, as it is lower than the expected industry average. According to an earlier study by Bain & Co., online retail penetration in the luxury market is expected to exceed 30% by 2025.

Capri management forecasts revenues of $5.85 billion for 2023, representing growth of 3% year-on-year (10% in constant currency terms). Gross margins are expected to remain at the same level as a year earlier and operating margins will be around 18%.

The financial results for Q1 2023 are shown below:

At the end of the latest TTM reporting period, operating cash flow was $637 million compared to $704 million for the year. The decrease is due to an increase in net working capital due to the inventory balance. Management expects the inventory balance at the end of 2023 to be lower than a year earlier. Free cash flow to equity decreased from $573 million to $493 million.

Capri has a healthy balance sheet: the company has total debt of $3.28 billion, cash equivalents and short-term investments of $221 million and net debt of $3.06 billion, which is 2.6 times TTM EBITDA (Net debt/EBITDA — 2.61x).

The minimum price target from investment banks, set by Credit Suisse, is $56 per share. Guggenheim, on the other hand, values CPRI at $75 per share. According to the consensus, the fair market value of the stock is $70.80 per share, which implies a 52.25% upside potential.