Canadian Solar Inc. (CSIQ) is one of the world's largest manufacturers of solar panels and consumables. The company accounts for 10% of the global solar module market. Canadian Solar operates in two segments: CSI Solar manufactures and sells inverters and batteries for energy storage, and Global Energy is focused on developing projects related to energy storage. The company was founded in 2001 and is headquartered in Guelph, Canada.

According to IHS Markit, photovoltaic capacity worldwide will double in the next five years and the global market for solar projects will grow at a compound annual growth rate (CAGR) of 5% over the same period. The main drivers of industry growth are high hydrocarbon prices, concerns about global warming, and significant technological advances that have made electricity produced by solar plants cheaper than that produced from less "clean" energy sources. 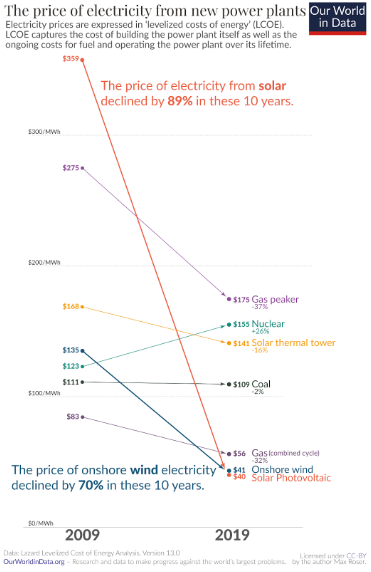 Cost of electricity depending on energy source

Europe's energy transformation is also an important driver for industry growth. Under the REPowerEU plan, the EU plans to accelerate the transition to renewable energy. REPowerEU envisages capacity growth to more than 320 GW of new solar photovoltaic installations by 2025 (more than double today's level) and to nearly 600 GW by 2030. Germany, the EU's largest economy, aims to more than triple its solar capacity to 200 GW by 2030.

Due to its vertical integration and leading position in the solar module market, Canadian Solar has a strong competitive positioning that has enabled the company to grow significantly faster than the market and increase its share. In 2021, for example, Canadian Solar's share of the solar module market grew by two percentage points to 8%, and it reached 10% in the most recent reporting period. The company's management expects the market share to grow to 15% within the next 2-3 years. 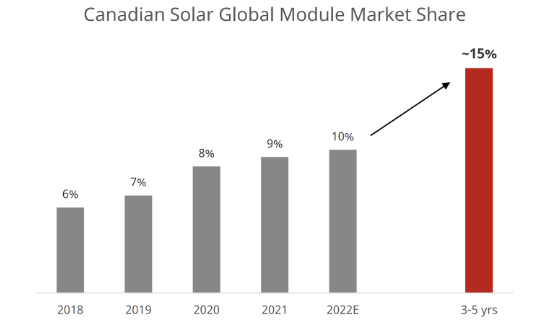 Reason 2. The potential of the CSI Solar segment

In Q2, CSI Solar delivered 5.1 GW of solar modules, 800 MWh of batteries and generated $1.8 billion in revenue, a record for Canadian Solar. Despite higher prices, the company's management notes strong demand for its products. As a result, the company has energy storage systems in development with a combined capacity of 11 GW at the end of the last reporting period.

Storage systems represent a significant opportunity for the company, as its customers typically enter into long-term service agreements with Canadian Solar with fixed, regular payments. Today, the company serves projects with a combined capacity of more than 3.1 gigawatts, but management plans to reach 20 gigawatts by 2026. In this way, Canadian Solar can secure a sustainable cash flow in the future.

With increasing demand and supply consolidation, CSI Solar's strategy has been to expand capacity and increase the level of vertical integration to increase market share, enhance pricing power and improve profitability. Indeed, the company's capacity has gradually increased over time. Module capacity is expected to grow from 27.9 GW in H1 2022 to 50 GW by the end of 2023. 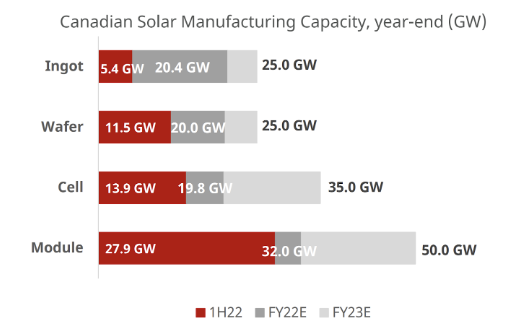 Within the Global Energy segment, the company specialises in the development, financing and construction of solar power plants and energy storage systems around the world. The company is one of the global leaders in this field.

In the second quarter, the Global Energy division completed about 880 MW of power projects in Australia, the US, Japan and the UK. At the same time, the capacity of contracted solar projects under operation and construction is 5.6 GW, including backlogs; the total capacity of all the company's anticipated solar projects is 26 GW.

In this way, Canadian Solar can secure a multiple of its revenue growth from already contracted projects alone. Management expects revenue from solar projects to grow at an impressive compound annual growth rate (CAGR) of 50% until 2026.

In mid-October, Canadian Solar and its partners launched Crimson Storage, the world's largest single-phase 350MW energy storage project that powers California's energy system. A fund managed by Axium Infrastructure US owns 80% of Crimson Storage, while Recurrent Energy — a subsidiary of Canadian Solar and the project developer — retains 20% ownership. Agreements are already in place with California's largest utilities, Southern California Edison and Pacific Gas and Electric Company. The stake in Crimson Storage will not only make a tangible contribution to Canadian Solar's operating results, but will also have a significant impact on the company's reputation. 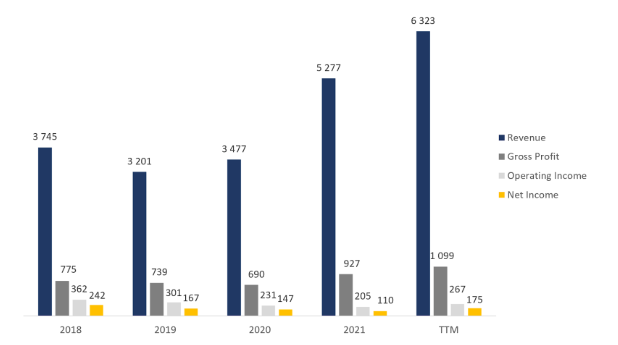 The financial results for H1 2022 are as follows

Free cash flow on equity rose from -$838 million to -$502 million. The deeply negative figure is due to a massive capital expenditure programme, which is expected to significantly improve the efficiency of operations in the future.

The minimum price target from investment banks, set by Wells Fargo, is $36 per share. Oppenheimer, on the other hand, values CSIQ at $56 per share. By consensus, the fair market value of the stock is $45.40 per share, suggesting a 35.72% upside.