Central Index Key (CIK): 0000012927 | ISIN: US0970231058 | Symbol: BA | Type: Stock.
Boeing is one of the largest companies in the global aviation market. The main field of activity is related to commercial airliners: the company designs and develops, manufactures, and maintains equipment for air transportation. In addition, it is engaged in military aircraft, satellites - Boeing is one of the top three arms manufacturers in the United States. As of January 2018, the company employed 153 thousand employees. Boeing stocks are of interest to both large funds and private investors around the world. They are included in the S&P 500 index. Boeing (NYSE:BA) stock price online, charts, stock price history, technical and fundamental analysis, reports, dividends, comments and more.


Simple and lightweight Boeing Stock Live Chart is a powerful free tool that allows you to easily conduct technical analysis online without downloading additional files and applications. In order to meet the needs of the most demanding technical analysts, you can find over a hundred chart analysis tools on our Boeing stock chart. You can also add any of 80 technical indicators directly to the chart online - in two clicks. The possibilities are endless!


Boeing Stocks Technical Analysis widget is a modern handy tool that shows ratings based on technical indicators data. The design of the widget is made in the form of a speedometer, thanks to which you can quickly see the results of the summary technical analysis. You no longer need to use many indicators for analyzing financial instruments, the widget will do it for you. In addition, all rating data are updated in real time. These technical indicators are used for technical analysis: Relative Strength Index, Stochastic, Commodity Channel Index, Average Directional Index, Awesome Oscillator, Momentum, MACD, Stochastic RSI, Williams Percent Range, Bull Bear Power, Ultimate Oscillator, Exponential Moving Average, Simple Moving Average, Ichimoku Cloud Base Line, Volume Weighted Moving Average, Hull Moving Average.

Boeing is one of the largest companies in the global aviation market. The main field of activity is related to commercial airliners: the company designs and develops, manufactures, and maintains equipment for air transportation. In addition, it is engaged in military aircraft, satellites - Boeing is one of the top three arms manufacturers in the United States. As of January 2018, the company employed 153 thousand employees. Boeing stocks are of interest to both large funds and private investors around the world. They are included in the S&P 500 index.

The company bears the name of its founder, William Boeing. The aircraft manufacturer laid the foundation for a future global business in 1916 in Seattle, where the main production facilities of the corporation are still located. There are factories in other states and abroad. Regional offices of the company operate all over the world. Boeing is headquartered in Chicago, Illinois.

The corporation has two main lines of production: military and civil. There are subdivisions responsible for project financing, innovative technological developments and their implementation, infrastructure support.

Boeing shares are an interesting asset for investors looking to build a balanced and diversified portfolio of deposits. They are chosen for both long-term and short-term strategies. One of the oldest companies on the market, it is reliable and resilient even in times of crisis.

A Brief History of Boeing Stocks from Simple-Invest

1916 - Flight of 2 B&W seaplanes, designed by William Boeing in conjunction with a naval engineer. This was followed by the establishment of a business that later became the Boeing Corporation;

1940s - development and construction of bombers at an accelerated pace against the backdrop of World War II;

1967 - the development of a series of Boeing 737 passenger jet aircraft, which later became the most used in passenger air transportation, was completed;

1981 - the Boeing 767 airliner was developed for flights over medium and short distances;

2019 - The company developed the Boeing 777-9X - the world's largest twin-engine airliner - and unveiled it behind closed doors.

2019 was a very difficult year for the corporation - the Boeing 737 MAX model raised safety concerns among experts after two plane crashes. The liner eventually had to be removed from production after a number of countries, including the United States, abandoned the model.

These circumstances could not but affect the Boeing share price. The situation with the pandemic also had a negative impact - due to quarantine restrictions, air travel suffered significantly.

In 2020, a number of steps were taken to correct the shortcomings of the 737 MAX, after which the company was able to return the model to the market. The sharp decline in the value of Boeing stocks made them extremely attractive to some investors, especially against the backdrop of forecasts by leading world analysts. The “hold” and “buy” recommendations were based on the assumption that after the crisis the company would recover and the securities would rise in price.

The company published a report on the results of 2020 at the end of January 2021, reporting the largest loss in its history - about $ 11.9 billion.

But already in March 2021, the number of orders for aircraft again exceeds refusals, new contracts for the modified 737 MAX are being discussed (the United States was allowed to resume flights of the model in December 2020, Europe - in January 2021). This gives analysts reason to hope for future growth in Boeing stocks.

Good day Traders and Investors. In today’s article, we will look at the past performance of 1 Hour Elliottwave chart of Boeing Stock ($BA). The decline from 08.16.2022 high is unfolding as a Double three (WXY) and made a lower low on 09.14.2022 which created a bearish sequence in the 1H timeframe. Therefore, we knew that the structure in $BA is incomplete to the downside & should see more weakness. So, we advised members to sell the bounces in 3, 7, or 11 swings at the blue box area. We will explain the structure & forecast below:

Here is the 09.16.2022 1H update showing the move taking place as expected. The stock has reacted lower from the blue box allowing any shorts to get risk free shortly after taking the position. Currently, the stock has already made a new low confirming that the next extension lower is taking place targeting $137.56 – 123.02 before a bounce can take place in 3 swings at least.

Hey there! Someone in my Facebook group shared this website with us so I came to take a look.
I'm definitely enjoying the information. I'm
bookmarking and will be tweeting this to my followers!
Terrific blog and wonderful style and design.

Analysts maintain a HOLD recommendation for Boeing Co stocks. with a target price of $ 250 apiece at the end of 2022, the investment company said in a commentary. "The world's leading aerospace corporation and the largest manufacturer of passenger aircraft Boeing released financial results for the second quarter of 2021. At the same time, adjusted profit in the second quarter was $ 0.40 per share against a loss of $ 4.79 per share a year earlier, while analysts were expecting a loss by the level of $ 0.83 per stocks. 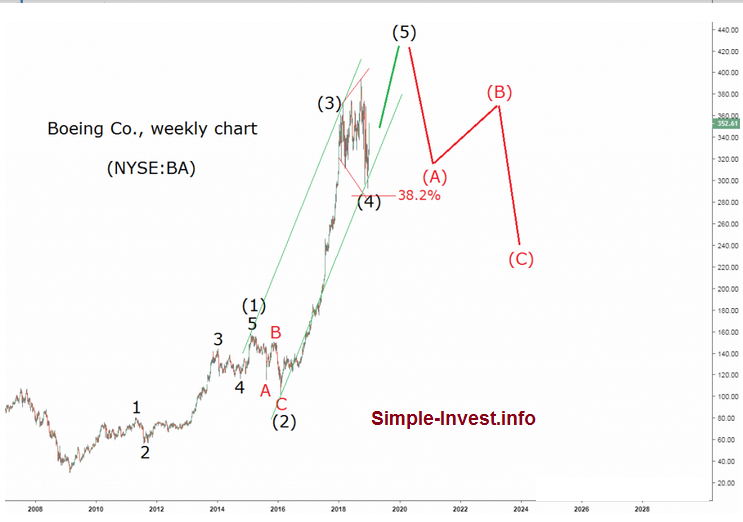 The market is obeying the alternation directive as wave (2) is a sharp A-B-C zigzag and wave (4) is a sideways triangle correction. Wave (4) seems to have completed slightly above the 38.2% Fibonacci level.

In addition, a trend channel can be drawn through the highs of waves (1) and (3) and the lows of waves (2) and (4) to further confirm this count.

If the analysis is correct, we can expect more gains in Boeing's stock over the next few months. The exact wavelength (5) is difficult to measure in advance, but the bulls should be able to hit the $ 400 target and maybe even $ 450.

Unfortunately, investors hoping for even higher levels will be disappointed. The Elliott Wave Theory states that every impulse is followed by a three-wave correction in the opposite direction. Just as wave (1) was followed by the fall of A-B-C in wave (2), the entire uptrend since 2009 should give way to a large decline (A) - (B) - (C).