Central Index Key (CIK): 0000002488 | ISIN: US0079031078 | Symbol: AMD | Type: Stock.
Advanced Micro Devices, Inc. manufactures integrated microcircuit electronics. It is one of the world's largest suppliers of CPUs and GPUs and a leading developer of computer technology for the commercial and consumer sectors. AMD stocks have almost doubled in 2020 and continue to be of interest to private investors and funds. Among the major stocksholders of AMD is JP Morgan. AMD is Intel's most powerful competitor, second in the world in the microprocessor market. At the moment, the company is systematically expanding its stocks. Advanced Micro Devices (AMD) stock price today, live price online, charts, professional analytics, technical and fundamental analysis, comments, reports, dividends and more about AMD stocks.


Simple and lightweight Advanced Micro Devices Stock Live Chart is a powerful free tool that allows you to easily conduct technical analysis online without downloading additional files and applications. In order to meet the needs of the most demanding technical analysts, you can find over a hundred chart analysis tools on our AMD stock chart. You can also add any of 80 technical indicators directly to the chart online - in two clicks. The possibilities are endless!


Advanced Micro Devices Stocks Technical Analysis widget is a modern handy tool that shows ratings based on technical indicators data. The design of the widget is made in the form of a speedometer, thanks to which you can quickly see the results of the summary technical analysis. You no longer need to use many indicators for analyzing financial instruments, the widget will do it for you. In addition, all rating data are updated in real time. These technical indicators are used for technical analysis: Relative Strength Index, Stochastic, Commodity Channel Index, Average Directional Index, Awesome Oscillator, Momentum, MACD, Stochastic RSI, Williams Percent Range, Bull Bear Power, Ultimate Oscillator, Exponential Moving Average, Simple Moving Average, Ichimoku Cloud Base Line, Volume Weighted Moving Average, Hull Moving Average.

Advanced Micro Devices, Inc. manufactures integrated microcircuit electronics. It is one of the world's largest suppliers of CPUs and GPUs and a leading developer of computer technology for the commercial and consumer sectors. AMD stocks have almost doubled in 2020 and continue to be of interest to private investors and funds. Among the major stocksholders of AMD is JP Morgan. AMD is Intel's most powerful competitor, second in the world in the microprocessor market. At the moment, the company is systematically expanding its stocks.

Advanced Micro Devices, Inc., or AMD, was founded in 1969 by Jerry Sanders. The name of the company is translated from English as advanced micro-devices, which fully reflects the essence and mission of the business. At the beginning of AMD's formation, the authorized capital was 100 thousand dollars, and logic integrated circuits became the first product.

The developer does not have its own production facilities, orders are placed at the facilities of partner companies. The status of a factoryless company allows AMD to fully concentrate all its resources on the design, development, and promotion of its products.

AMD is headquartered in Santa Clara, California, USA. The executive director and president of the company is Lisa Su. The number of employees, according to the data provided by the company at the end of 2018, is slightly more than 10 thousand people. AMD shares are listed on the NASDAQ American stock exchange.

It specializes in the production of microprocessors, chipsets, graphics processors and motherboards. The firm operates in three areas - development of solutions for computers, graphics and products for enterprises.

A Brief History of AMD Stocks from Simple-Invest

1993 - Cooperation with Fujitsu was crowned with success - the company released the first flash memory.

2017 - the announcement of the HEDT platform with a powerful 16-core processor. Return to the server market.

2018 - the improvement of the Ryzen Threadripper processors: they began to be released with 32 cores.

In 2019, AMD was able to establish cooperation with two Internet giants - Google and the social network Twitter. They decided to use an AMD processor in their data centers.

2019 saw another major milestone - AMD unveiled an innovative graphics card for the professional design and architecture market. This is the first time such a product has been created on the basis of 7nm (seven-nanometer) technology. The novelty was presented in Denver during the Supercomputing conference.

New product announcements and new customer announcements tend to affect AMD's stock price. For example, after the news about the release of the new Radeon Pro W5700 video card in 2019, the quotes reacted with growth.

In 2020, an important moment for the issuer was the release of the Instinct MI100 GPU. This high-performance model was built for AI computing and work.

In October 2020, it became known about the purchase of a competitor - the American chip manufacturer Xilinx. A major merger deal should open up new perspectives for both companies - combining resources and technologies will expand market influence and product range.

What is Important for an Investor to Know

If you are considering buying AMD stock, it is important to pay close attention to the many factors that can influence the price in one way or another. This includes news regarding the issuer itself, its competitors, the general state of the financial market, and global trends.

AMD products are actively used in personal computers, game consoles, data centers. The steady growth in demand for computer technology gives the company reason to count on an increase in sales. However, when planning the purchase of assets, it is important to carefully approach the issue of choice, evaluate a whole range of factors and reasonably diversify investments.

According to the report for the fourth quarter of 2019, the company's revenue was $ 2.13 billion, which is 50% more than in the same period in 2018. Net income reached $ 170 million. These figures were the highest since 2005. Peak sales of graphics cards and processors from Ryzen, Radeon and Epyc are considered the start of a positive trend.

2020 was no less successful for the company. Quarantine restrictions, introduced almost all over the world, have become a catalyst for increasing demand for computers, cloud services and other technologies that use AMD products.

Against this background, AMD stocks, which in January 2020 cost about $ 46 per share, rose to a price of $ 91 by December. According to the results of four financial quarters of 2020, the developer's capitalization exceeded $ 100 billion, which became a significant event in the history of the enterprise.

Buy cheerfully, merged with NASDAQ, buy faster than the market. Another sign that this is a reversal. 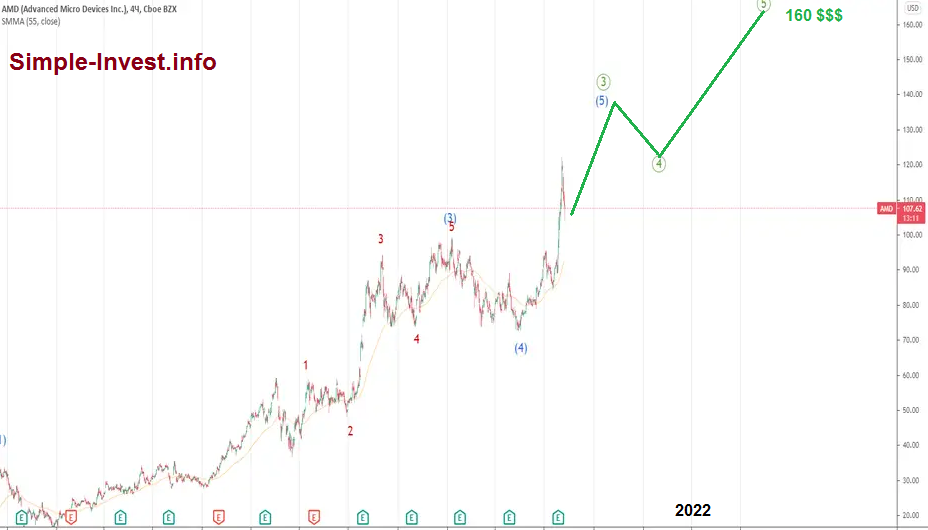 After that, the price should correct in the fourth wave at the level of $ 120.

Further, the price will end the upward movement with a fifth wave shot to the price of $ 160 per stocks. (Classic Understanding Elliott Wave Analysis)

Its like you read my mind! You seem to know a lot about this, such as you
wrote the book in it or something. I feel that you simply can do with
some % to pressure the message house a little bit, however instead of
that, this is wonderful blog. A fantastic read. I'll definitely be
back.