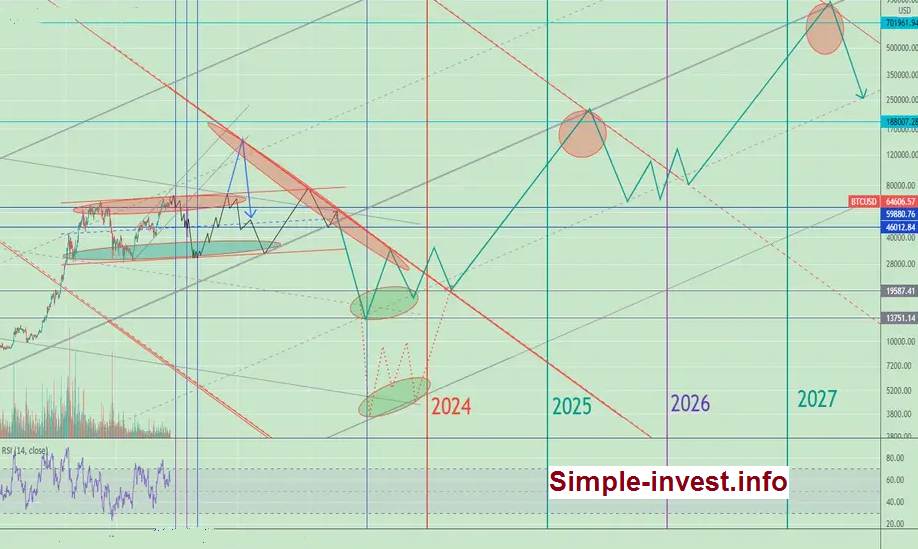 It's just that it's interesting to check how accurately it will turn out to predict the movement of bitcoin for 6 years ahead. I post the forecast publicly without the possibility of deleting, editing, all my mistakes and hits you can always track, in this forecast.

There is a category of people who, seeing such long-term Bitcoin predictions, begin to answer: these are empty predictions. They seem to think that Wave Analysis is hourly and minute timeframes.

I won't argue - you are absolutely right - I have great coffee and a crystal ball.

Attached is a similar long-term forecast for Bitcoin from early 2020. You can check how the forecast worked.

I decided to look at the Bitcoin chart far away:

1. Movement within the double red parabola - a global bullish trend.

Presumably, a correction will be directed there after the 2020-2021 tops update.

One of them is highlighted in bold - it defines the current two vertices.

3. The black trend line has been broken from the bottom up since the beginning of 2013 and has never broken down since then - acting as support. It was recently retested at 6500.

What will look like a false breakout on such a global chart. It is from this level that I draw the predicted movement with a yellow line.

Honestly, I would like the market to provide such an opportunity to add fiat savings.

But the penetration may not take place now - but much later. After all, a channel of red parabolas should eventually break straight trend lines. And the channel gradually rounds out to the horizon.

4) The pink trend line is also interesting. Above which were usually the tops of the iceberg, and below it the base. Where are we now? Under it - we are approaching a retest or a breakout.

5. The bold red line defines the peak of 2013, it very nicely indicated support in the second half of 2018. when we retested it multiple times from top to bottom and then struck and flew to 3500. Now it acts as the bisector of the angle formed by bold black and blue in which we are now and are under it.

Expectations: BTC is about to go through another peak in 2020-2021 which will be around $ 60,000-80000 per bitcoin. To start with the current ones or from 5400. Going lower to the 3500 update is also permissible, because it would be a logical retest of the lower red parabola and a W reversal formation.

Leave some fiat patrons just in case, and for this level, investors should. I will share 70-80% of fiat currency at 5400, 20-30% will be left for 3500. And if we do not break through the black one and will grow from the current ones, then I will work with what I have. And fiat currency - I will find where to use it.