Technical Analysis and Forecast of Bitcoin BTC/USD for October 5, 2022

Miners involved in bitcoin (BTC) mining have for years struggled with criticism related to high energy consumption, which translates into the environment. In search of solutions to the high energy demand for cryptocurrency mining, some countries have attempted to balance the amount, but still allow miners to run their current activities. To this end, the Argentine state-owned company - YPF - decided to supply unused gas to an international mining company, the media reported.

Martin Mandarano, CEO of YPF Luz, the YPF's renewable energy division, announced that a one-megawatt pilot project was launched in the south of Argentina three months ago. Its purpose was to provide energy generated from waste gases left over from oil extraction. Mandarano also mentioned that the company is working on another much larger - eight MW - pilot project. He announced his start at the end of the year. YPF Luz CEO said:

"We started to develop this generation pilot program to mine cryptocurrency with a vision for sustainability and business based on natural gas from a flare that cannot be used during the exploration and early exploitation of an oil field.

Attempts to Reduce the Carbon Footprint of BTC ".

Another example of efforts to reduce the carbon footprint of bitcoin mining is the Lumos Digital Mining mining pool operating in South Australia. It is trying to mine the first cryptocurrency using solar energy. The mine is thus trying to become the first energy supplier of this type in the region. It currently provides around five megawatts of electricity to minimize bitcoin's carbon footprint. Similarly, in western Colorado, Aspen Creek Digital has started operating solar-powered bitcoin mining.

The BTC/USD pair has been seen testing the supply zone again. Only a sustained breakout above the levels of $20,221 - $20,580 would change the outlook to more bullish, so please keep an eye on this zone for a possible breakout towards the next target seen at $22,410. The market conditions on the H4 time frame are extremely overbought, so a local pull-back towards the level of $19,891 is possible. The nearest technical support is seen at $19,096 and $19,256. The swing low is seen at the level of $18,150.

Trading Outlook:
The down trend on the H4, Daily and Weekly time frames continues without any indication of a possible trend termination or reversal. So far every bounce and attempt to rally is being used to sell Bitcoin for a better price by the market participants, so the bearish pressure is still high. The key long term technical support at the psychological level of $20,000 had been violated, the new swing low was made at $17,600 and if this level is violated, then the next long-term target for bulls is seen at $13,712. On the other hand, the gamechanging level for bulls is located at $25,367 and it must be clearly violated for a valid breakout. 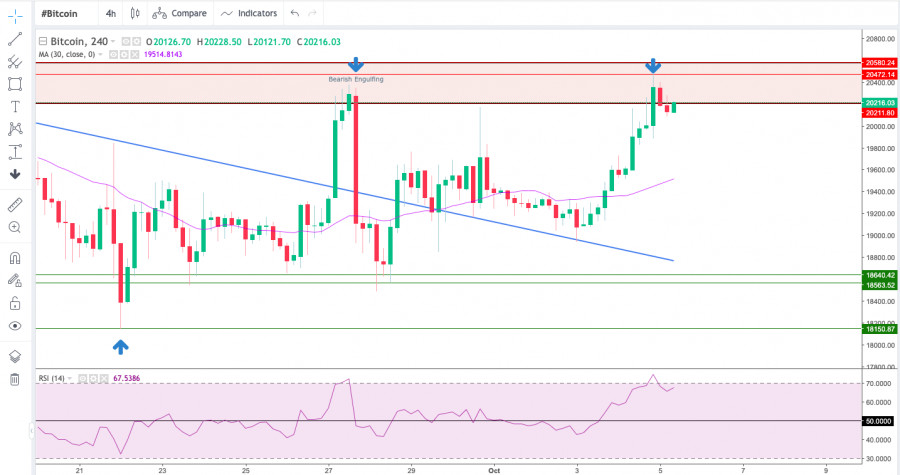