Digital Turbine (APPS) provides a software platform for mobile operators and OEMs that enables them to monetize mobile devices by personalizing the customer experience during app installation and activation. The company was founded in 2008 and is headquartered in Austin, Texas.

The share of advertising through mobile platforms, which Digital Turbine specializes in, has grown by 15 percentage points over the past five years and has become dominant in the overall structure of digital advertising spending. Today, the share of mobile platforms is 61%, and it is expected to reach 69% by 2027. 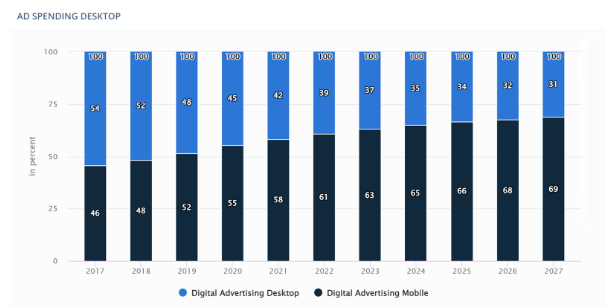 Share of mobile platforms in the digital advertising market

Thus, the potential target market for Digital Turbine will be about $613 billion by 2027, compared to $357 billion today. If the company maintains its current share, the expected market dynamics could provide it with a CAGR of around 11.4%. It is worth noting that over the past five years, Digital Turbine has grown significantly faster than the industry average and increased its market share.

Digital Turbine depends on the digital advertising market and the smartphone market, both currently facing problems, but the company has several drivers that could lead to faster revenue growth than analysts expect.

The company's management sees significant sales potential for SingleTap, a proprietary application developed by Digital Turbine that allows users of one application to quickly and efficiently download another application without leaving the first app. That is, a user does not need to use Play Market or App Store to download. According to management, SingleTap increases download rates by 40%-200% and thus increases the ROI of advertising campaigns.

In the latest quarter, Digital Turbine announced that it had attracted two new major customers, rumored to be Amazon and Epic Games. Meta has been recently working with Digital Turbine to integrate SingleTap into Meta’s platform and is likely to become Digital Turbine’s customer shortly. In addition, Google is expected to sell the license on its own Google Cloud marketplace. Partnerships with major technology companies can ensure SingleTap's widespread adoption, which will lead to a significant increase in Digital Turbine's revenue.

A headwind for the company was its switch from the prepaid to postpaid model in Mobile Posse business. The move was aimed at attracting major communications providers, like Verizon and AT&T, which generate most of their revenue through the postpaid model. Due to the transition, Mobile Posse's revenue is expected to bottom out this quarter and then pick up again. During a recent conference call, management said that Verizon has already begun using Mobile Posse and that AT&T is testing the solution and may eventually implement it, which would be another major source of revenue for Digital Turbine.

International expansion is one of the main components of Digital Turbine's long-term growth strategy. The share of foreign markets in the revenue structure is growing. Thus, according to the results of the first half of FY 2023 (the six months ended September 30, 2022), foreign markets provided the company with 45% of revenue against 43% a year earlier, with the EMEA (Europe, the Middle East, and Africa) region showing the largest growth from 29% to 34%.

The company is actively expanding its customer base around the world. In Latin America, Digital Turbine cooperates with America Movil, a Tier 1 Mexican mobile operator that ranks the world’s seventh in terms of subscribers. Last year, the company added Telefonica to its client base and plans to expand cooperation with the Spanish telecommunications provider this year. In addition, Digital Turbine cooperates with several Chinese OEMs. It is worth noting that its average revenue per application user abroad is lower than in the US, which means there is room for catch-up growth.

The company's results for the last 12 months (TTM) can be summarized as follows:

Over the past five years, Digital Turbine has steadily increased margins due to the ease of scaling of its software solutions and, as a result, economies of scale. The company has the potential to further improve profitability as the size of its target market provides room for further revenue growth, while particular features of its business model allow Digital Turbine to improve operating leverage as it expands.

The company’s financial results for H1 FY 2023 are as follows:

Cash from operations (TTM) amounted to $141.3 million in the latest reporting period, compared to $84.7 million for the full year. Free cash flow increased from $61.5 million to $155.5 million. The increase is due to a higher net income.

The minimum price target from investment banks set by Oppenheimer is $17 per share. Craig Hallum, on the other hand, values APPS at $30 per share. According to the consensus, the fair market value of the stock is $25.5 per share, which implies a 82.4% upside potential.

While there is significant long term potential in the digital advertising market, in the short term, industry players, including Digital Turbine, may be under pressure in terms of financial performance and share prices.

Some Digital Turbine competitors have significantly larger resources. This factor may affect the company's ability to grow organically in the long term.