The digitalisation of companies, in addition to new horizons for business, also opens up new opportunities for criminals. Based on expert forecasts, we expect demand for cyber security products to grow. We suggest that investors diversify their portfolios by adding stocks in this area so as not to miss out on possible profits. We have selected two companies that can show good returns: Rapid7, Inc. and Datadog, Inc.

Reason 1: Growth trends in the industry
In Q3 2022, the number of global cyber attacks increased by 28% compared to 2021, with the average number of attacks per week surpassing the 1 130 mark, according to a Check Point survey. AAG reports that 76% of survey respondents said that their organisation had experienced at least one cyberattack in a year. This compares to 55% in 2020. The statistics by industry, shown in the chart below, show that healthcare (+60% year-over-year) and finance (+40% year-over-year) are among the leaders in terms of the number of attacks. 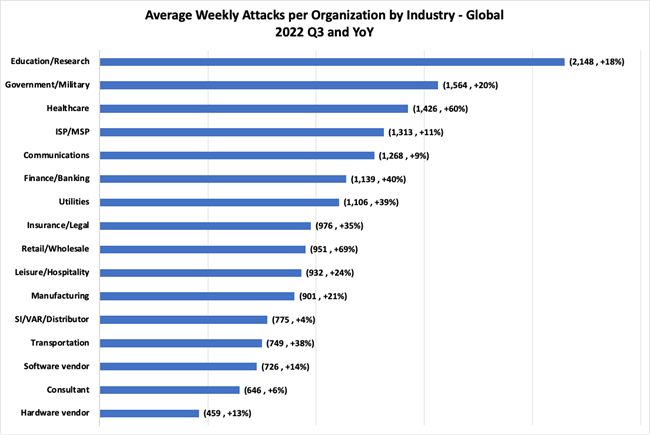 Yet, as the infographic from the IBM report below shows, the cost of data leakage is highest in these same industries and is increasing year on year. 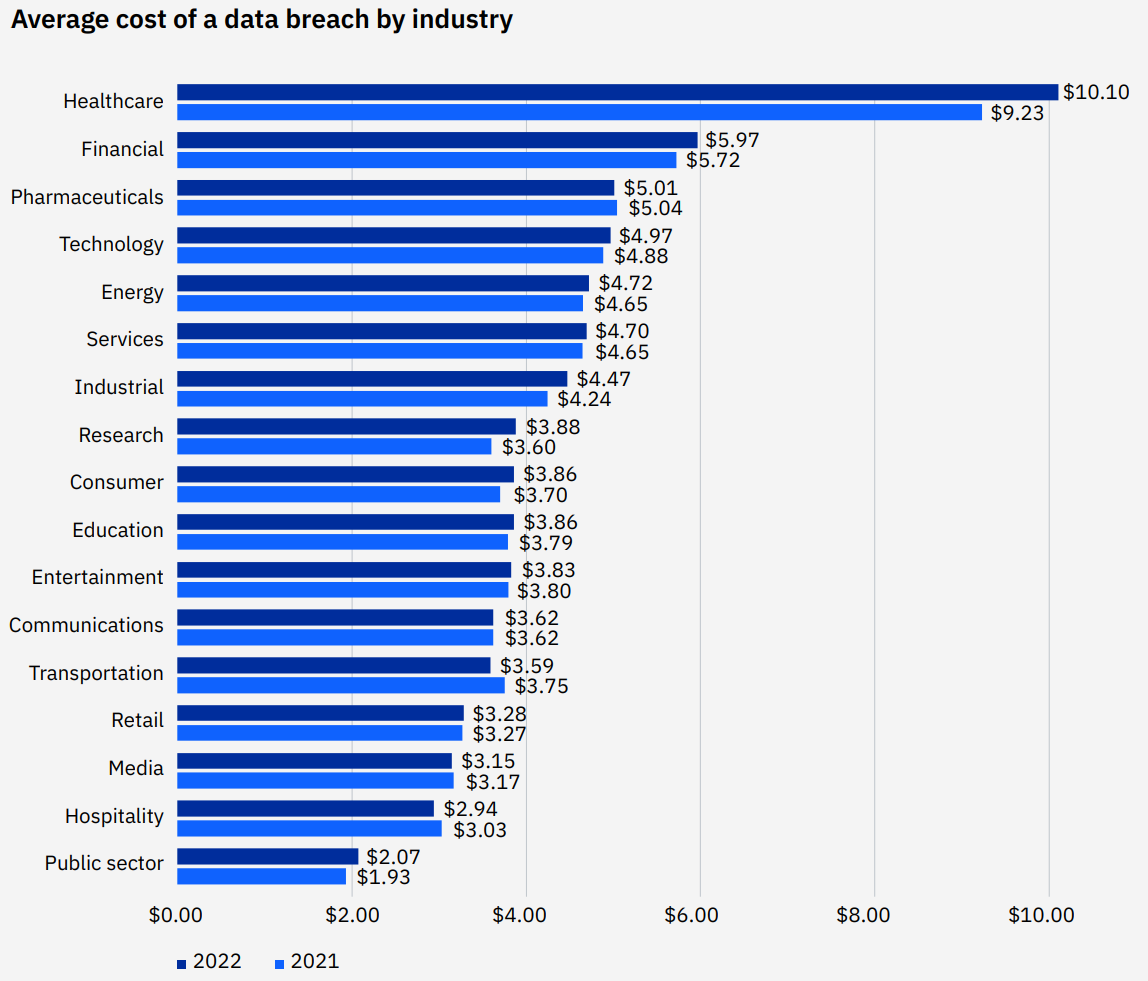 These statistics play into Rapid7's hands, as not only do these industries handle huge amounts of money, but companies also store significant amounts of sensitive personal data, the leakage of which can be very sensitive to business. As such, businesses will be willing to pay for cybersecurity in any economic climate.

Looking at the breakdown by region from the Check Point study mentioned earlier, it is worth noting that in Q3 2022, the increase in weekly cyber attacks in North America was at 47% and in Europe at 22%. In 2021, these regions generated ~53% of total global GDP, which suggests that there is opportunity and interest from US and European organisations to invest in cyber defence. Separately, we highlight the fact that 79% of Rapid7's revenue is generated in North America, so an increase in cyber attacks in the region could significantly accelerate the company's growth rate.

In the future, Fortinet predicts that a new wave of cybercrime can be expected through the proliferation of Cybercrime-as-a-Service offerings on the darkweb.

Reason 2. Potential of the company
The market's need for greater cybersecurity is reflected in Rapid 7's results: annual recurring revenue (ARR) from Q3 2018 to Q3 2022 showed an average growth rate (CAGR) of 33%: 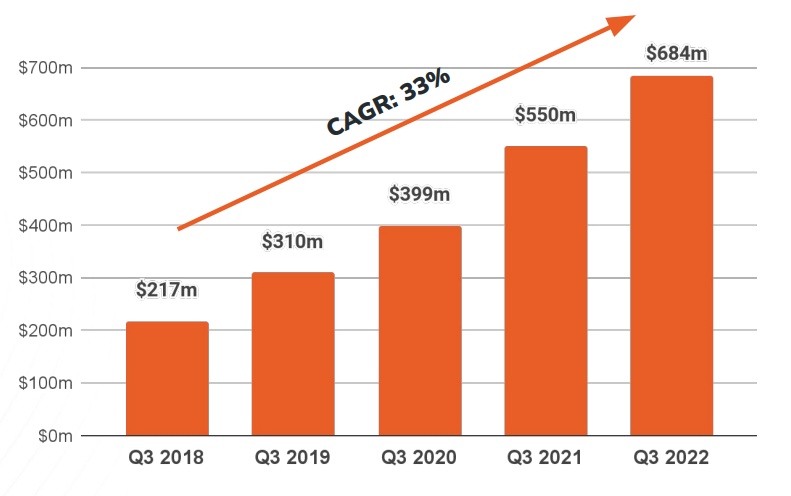 Note that Rapid7 aims to increase annual recurring revenue both by increasing its customer base and by growing revenue per customer. For example, over the period from 2019 to 2022, the average annual growth rate of ARR per customer was 16%. Customer acquisition activity is also paying off, with the number of users increasing year-on-year from 10,283 to 10,791. 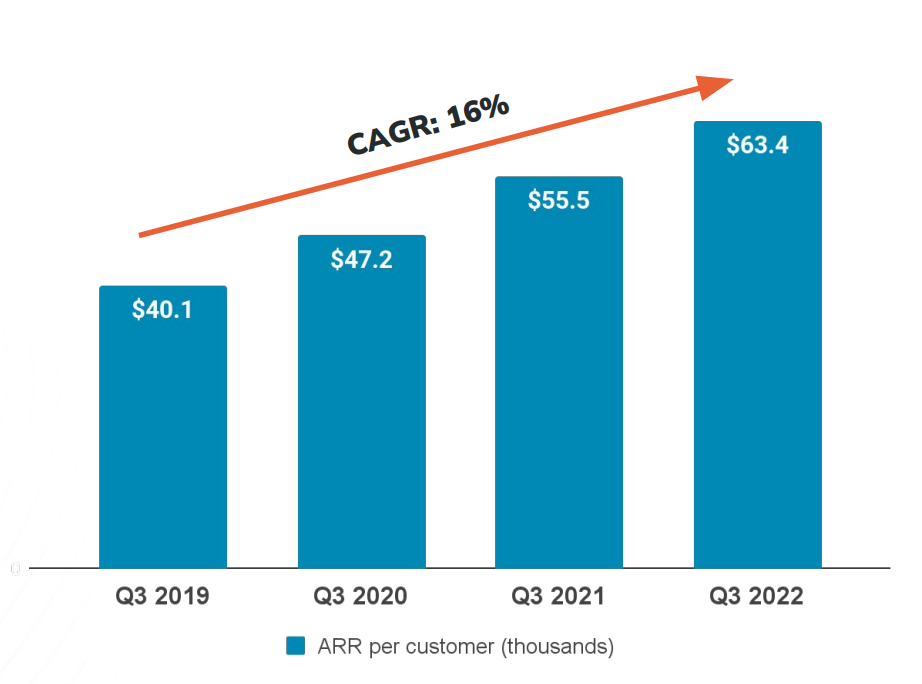 That said, as the illustration below shows, great opportunities remain: the global volume of leads exceeds 74,000, and each medium-sized client has the potential to increase the company's ARR by $500,000 per year. 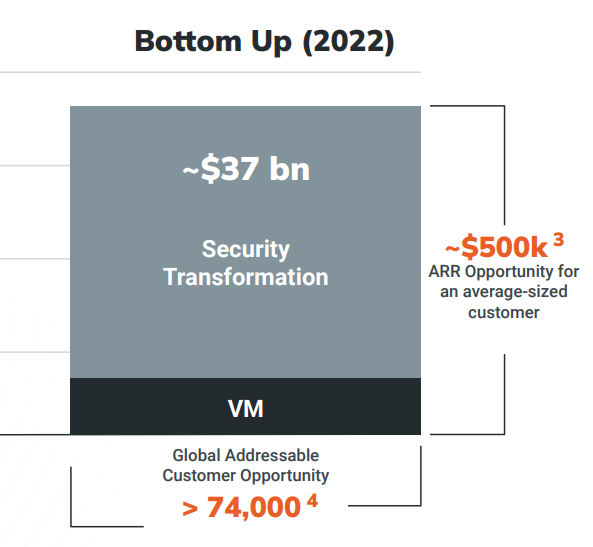 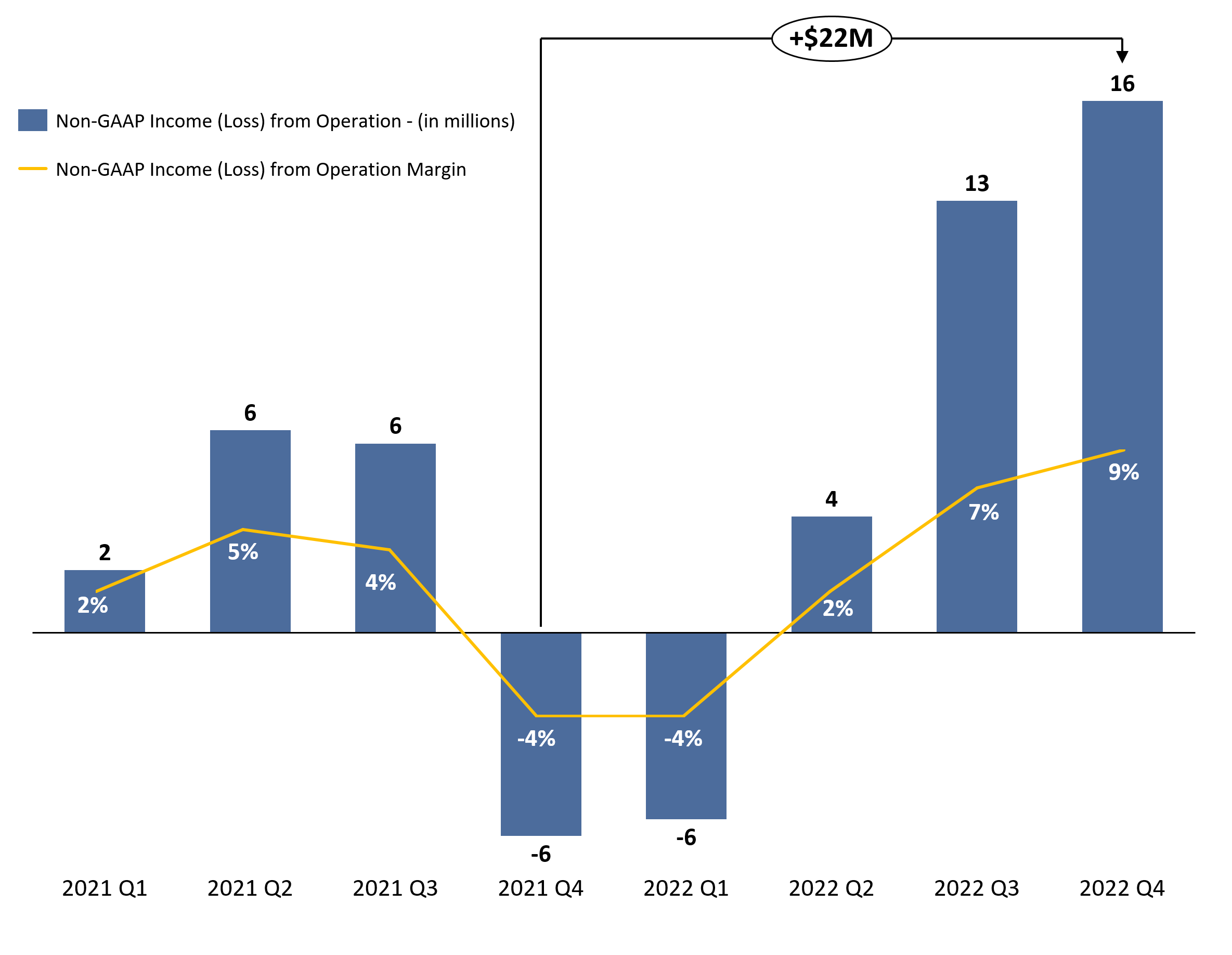 As can be seen from the chart below, the realisation of the Rapid7 projections will also indicate that the company is starting to gain free cash flow volumes at a rapid pace, indicating improved operational processes within the company. 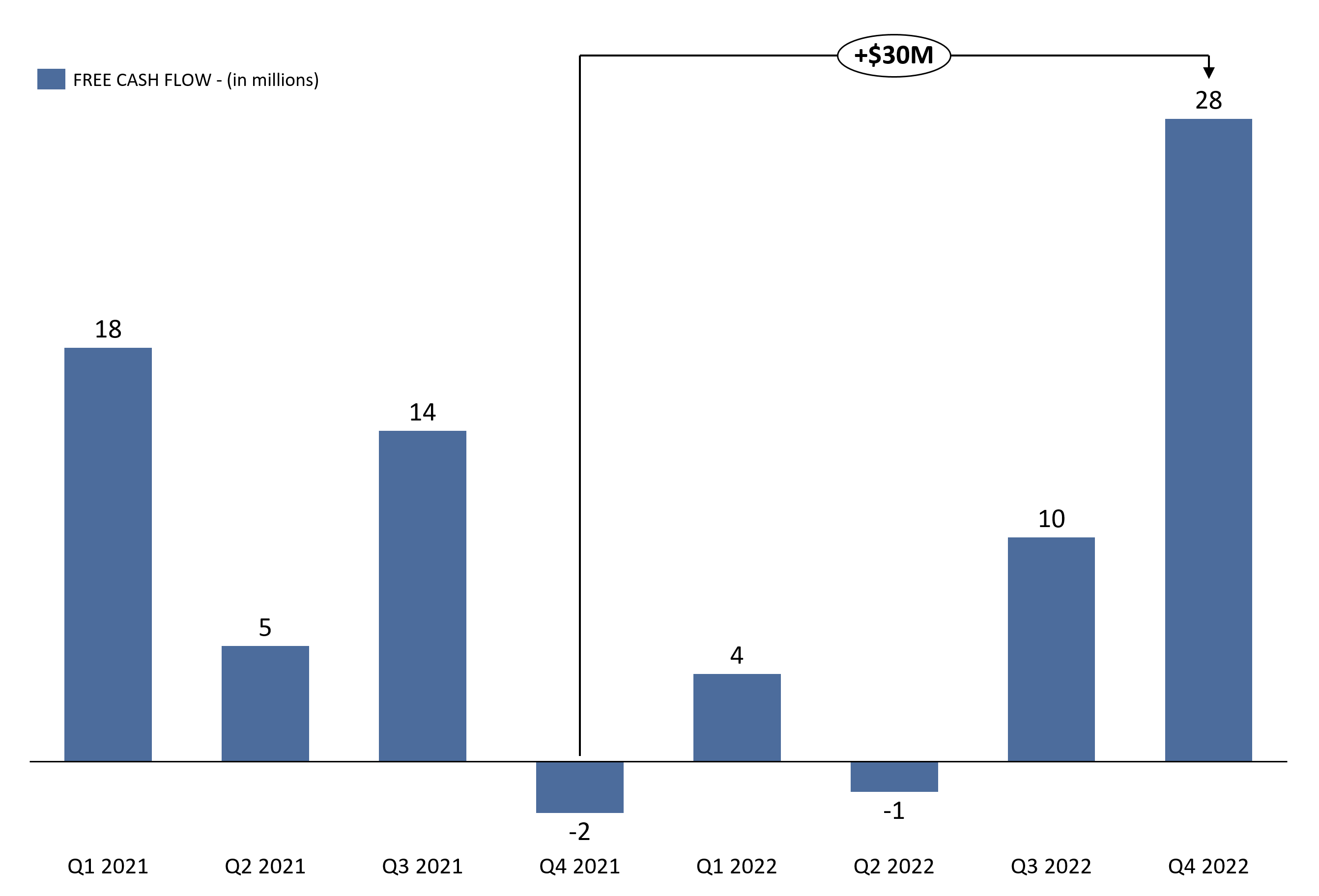 Supporting Rapid7 in the achievement of these goals will be the positive news:
On 26 July, Rapid7 introduced new contextual capabilities to the InsightCloudSec platform, allowing security teams to gain real-time, consolidated insight across their entire infrastructure into risk signals, including misconfiguration and public dissemination of information. The increased frequency of cyber-attacks mentioned earlier may increase interest in such products, enabling a more rapid response.

On 27 September, the company announced that it had been added to the US Department of Homeland Security's "Continuous Diagnostics and Mitigation Program" list of approved products. This decision allows government agencies to use Rapid7 solutions to manage vulnerability risks. We expect this market expansion to have a positive impact on Rapid 7 Inc.'s financial results on the investment idea horizon.

Free cash flow: down from $29.4 million to $10.1 million. The effect is mainly due to the fact that the company raised new debt financing in 2021 for the takeover, which was reflected in cash flow.

Based on the results of the most recent reporting period:

Free cash flow: down from $37.2 million to $9.7 million, mainly due to higher levels of capital expenditure

Despite the high base effect of 2021, further compounded by the new challenges of 2022, Rapid 7 reported strong financial results in the last quarter. As we said before, we expect a further improvement in financial performance in Q4.

The company has an adequate level of debt, but it should be noted that Rapid7 is generating losses at its current stage of development, which increases the level of risk for the investor.

In terms of trading multiples, the company is more expensive than its peers on most metrics except EV/S (3.53x vs. 4.02x). In our view, such multiples adequately reflect Rapid7's further growth potential.

Ratings of other investment houses
The minimum price target set by Truist Financial and Barclays is $40 per share. Piper Sandler, on the other hand, has set a target price of $95 per share. According to the consensus, the fair value of the stock on a recommendation from the beginning of summer is $31.84 per share, which suggests an upside of 82%. 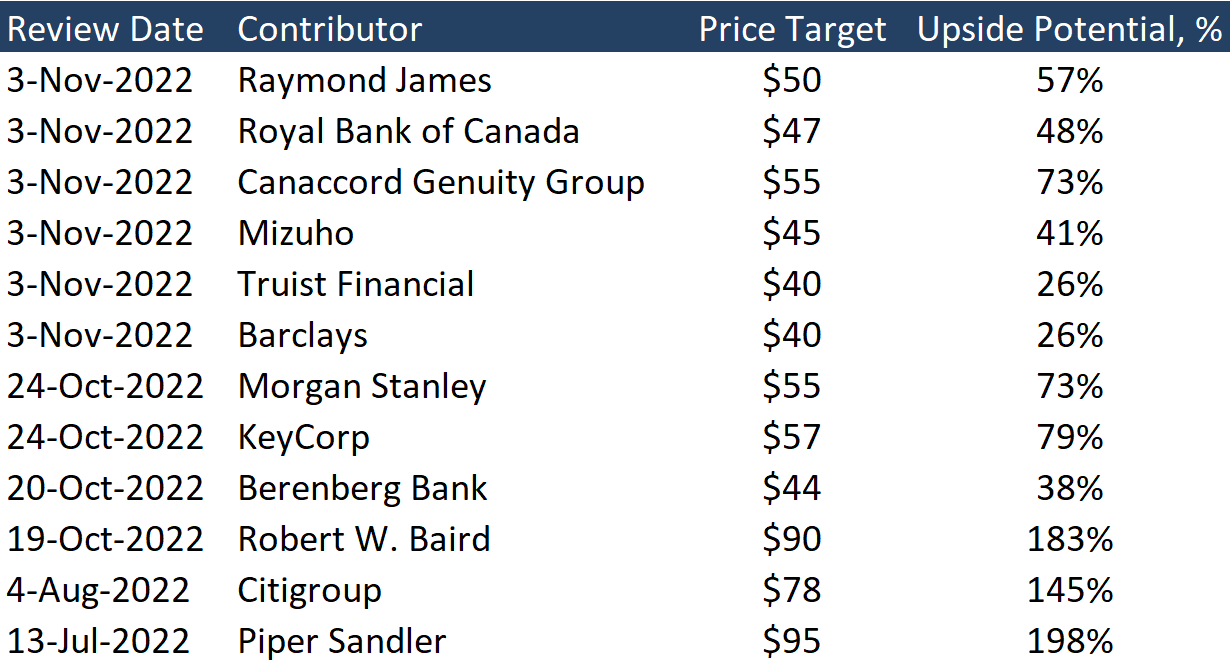 So far, the company is not generating a net profit. If financial difficulties arise, there could be considerable volatility in the stock price.

Despite the critical importance of defending against cyber-attacks, in the event of a major recession, customers will want to minimise their costs.