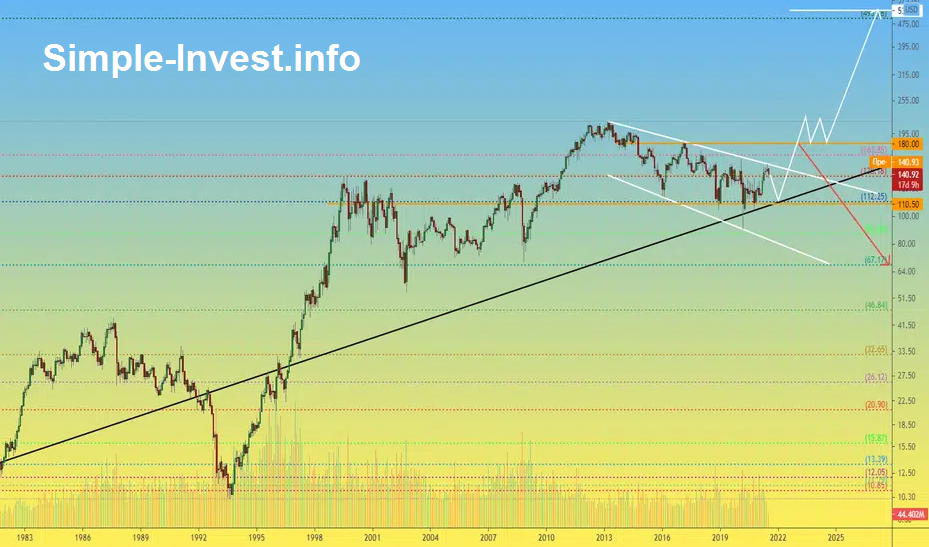 Looking at the chart, one dark period in the history of IBM can be noted - this is the beginning of the 90s, when the price of IBM stocks fell to a critical $ 10. In 1993, IBM posted a loss of $ 8bn, the largest in American corporate history at the time, and it was time for drastic action.

New CEO Luis Gerstner decides to cut 20% of its employees, which is 60,000 people. It was the largest cut in American history, but helped the IBM corporation survive from 1993-1994. From 1993 to 2002, when Gerstner left the Blue Giant, the company's market capitalization rose from $ 29 billion to $ 168 billion. This man is considered the savior of IBM.

The next interesting period is the beginning of 2013, then a protracted correction in the value of IBM shares began, with which the price is now trying to start going up.

So, now let's talk about the prospects that we assume by looking at the IBM stock chart.

The maximum correction that we are now admitting is a fall to $ 110.50-112.50, from which we expect a strong rise in the value of IBM stocks.

We consider the critical level - 180$. Fixing the IBM stock price above this level will pave the way for long-term growth with a target of $ 500-530.

Alternative scenario: If the market is negative and the price cannot break above $ 180, then there will be a long-term downward movement towards $ 70 per IBM stock.