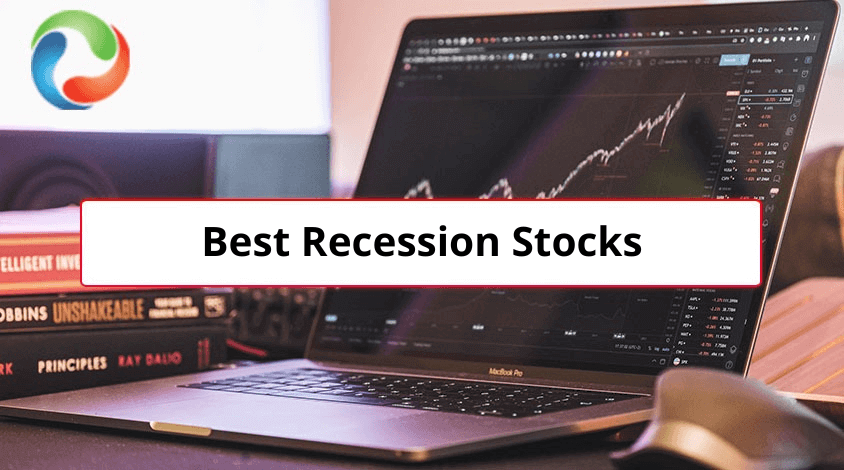 What are Recession Stocks?
Recession stocks are stocks of companies whose products and services consumers will continue to purchase, no matter what the economic conditions. Certain industries such as the defensive, healthcare, utilities, or consumer staples are often resistant to the negative effects of the recession. Investors chose to include recession-proof stocks in their portfolios to help safeguard their portfolio and returns during an economic slowdown. Investors always choose the best brokers that better suit his/her trading goals.

The Procter and Gamble Company

The Procter and Gamble Company has been around for more than a century. The company has survived many market crashes, prolonged inflation, and the Great Depression. Therefore, Procter and Gamble are on the top list for being the best stock to invest in during a recession.

Investing in fintech stocks is a smart investment move today.

The company has been able to maintain good revenue growth. In the past 5 years, Procter and Gamble achieved more than 5 % revenue growth, on average.

The Home Depot is the largest home improvement retailer in the US. Home Depot is a safe investment. According to many investors, it is not a recession-proof but the historical record of the company proves that it has come out of every crisis safe and sound. There is no denying that during a recession, sales of the company decline. But once the effects of the recession settled down, sales start to grow again. Get to know the best quantum computing stocks.

The Home Depot reported results for the second quarter of fiscal 2022:

At the end of the second quarter, the Company operated a total of 2,316 retail stores in all 50 states, the District of Columbia, Puerto Rico, the U.S. Virgin Islands, Guam, 10 Canadian provinces, and Mexico.

The Coca-Cola company is one of the best recession stocks to buy in 2022. No doubt an economic slowdown is expected but a recession is not likely to hurt the demand for beverages, significantly. The social events are on the rise and the restaurants are back to full-scale operations, The company has taken price actions to aid its sales growth and margin expansion over the coming quarters. Investing in value stocks is a long-term investment.

Coca-Cola has had an excellent past year, despite the challenging economic environment. This is enough proof for investors that the beverage company can withhold any recessionary environment. The company continues to preserve capital in times of trouble, pay a growing dividend, and continue to innovate on its product portfolio.

What’s more, Coca-Cola has increased its dividend payout for 60 years in a row, making it a Dividend King. All the more reasons to invest in this stock.

The Coca-Cola company has a market capitalization of $ 270.3 billion. Its share is currently trading at a price of $ 62.5.

The stock of the company has been on a bullish streak in the past two years. The stocks started the year 2021 at a price of $ 54.84. The stock continued its upward trend throughout the year and closed at $ 59.21. Overall, the stock appreciated by 8 % during the year.

Its business research and development, manufacturing, sales, distribution, service, and administrative facilities are located in over 60 countries.

The company has benefited significantly from high demand for its COVID-19 testing and treatment products. The company continues to invest for growth across our businesses, expanding production capacity and accelerating innovation initiatives. No doubt, the company’s revenue growth may slow in the coming quarters as the demand for COVID-19-related products declines. But the company is expected to sustain its growth in the coming years.

Danaher Corporation recently announced results for the second quarter of 2022:

McDonald’s Corporation operates in nearly 120 countries around the world. As a large global restaurant chain founded in 1955, it has extensive experience in adjusting to changing business conditions.

Get to know about RSI trading strategies.

The figures don’t lie for any company. The blue-chip company has had a notable performance in the past recessions. During the 2009 recession, the sales of Nike actually grew, and, during the pandemic, led recession, Nike successfully revamped its e-commerce presence which prevented the company from any effects of the recession. Hence, it is one of the best recession stocks to invest in. Get to know the best regional bank stocks.

For the complete year, the company reported:

British American Tobacco PLC is one of the largest tobacco conglomerates. It is a global tobacco company that manages a large portfolio of brands. It continued its global expansion into 180 countries around the world. Its cigarettes include Dunhill, Lucky Strike, Kool, Camel, Newport, Natural American Spirit, and Pall Mall, and its vape brands include Vype, Vuse, and Glo. It also sells Grizzly and Camel Snus. It’s also aggressively pursuing new categories. Give a read to a list of the Best NFT Stocks that can earn you great returns if you invest in them today.

BAT is focused on substantially transitioning to next-gen products. Investment in the company’s stock will provide exposure to the international tobacco sector, as BAT is spread around the globe. Also, its rising dividend yield and high-profit margins make it a good choice of investment during a recession.

British American Tobacco has a market cap of $ 91 billion. Its share is currently trading at a price of $ 41.01.

Zoetis is a global animal health company dedicated to supporting customers and their businesses in ever better ways. It commercializes products primarily across species, including livestock, such as cattle, swine, poultry, fish, and sheep; and companion animals comprising dogs, cats, and horses.

Zoetis is a former Pfizer subsidiary that made a name for itself when it spun off as an independent company focused on animal health and medicine. The company expects that its vaccine can safely inoculate around 100 mammalian species – though, at this time, its vaccine remains in the experimental stage.

Zoetis Inc recently reported its second-quarter results for the year 2022:

In 2022, the stock reversed its course and started on a bearish pattern. The stock recently closed at $ 166.35, representing a 32 % decline to date.

GlaxoSmithKline Plc is a healthcare company, which engages in the research, development, and manufacture of pharmaceutical medicines, vaccines, and consumer healthcare products. It operates through the following segments:

GlaxoSmithKline (GSK) boasts an impressive range of healthcare products that it provides to a global client base. The demand for GSK products is unmatchable and there seems no end to it. The coming future will only see a rise in demand and not a decline. Irrespective of economic conditions, healthcare remains a necessity, and GSK is the top provider. Therefore, no matter what the economic health is, GSK is very unlikely to be affected during a recession.

Get to know everything about high-frequency trading.

GSK recently shared its quarterly earnings report for the year:

Tech stocks are also one of the best investment opportunities.

The company has some foreseeable growth opportunities:

3M recently shared its quarterly report for the year 2022:

A recession is very hard on the general public and the investor community. Therefore, building a diversified portfolio is very important for investors to keep their portfolio running and earn a good return even during an economic slowdown.

The best approach to constructing a diversified portfolio is not only holding different company stocks. But it means investing in companies across multiple sectors, including those that are recession-resistant.

A diversified portfolio must include financially strong blue-chip stocks that have the ability to withstand a recession. Also, these blue-chip companies attract investor attention because they typically pay dividends. Blue-chip stocks in recession-resistant industries tend to be especially stable, which can help lessen the blow of a market sell-off or recession.