The Dow Jones Industrial Average Index (^ DJI) is one of the oldest stock indices. It is a kind of barometer that determines the state of the "blue chips" of the American stock market. The Dow Jones Industrial Average (DJIA) is one of the major American stock indices. For brevity, it is simply referred to as the Dow Jones Index and is the basis of a whole family of indexes. Dow Jones futures are traded on the Chicago Mercantile Exchange (CME) under the ticker DJI. Dow Jones (DJI) index price online, charts, indices price history, technical and fundamental analysis, reports, comments and more.


Simple and lightweight Dow Jones Index Futures Live Chart is a powerful free tool that allows you to easily conduct technical analysis online without downloading additional files and applications. In order to meet the needs of the most demanding technical analysts, you can find over a hundred chart analysis tools on our Dow Jones Index Futures chart. You can also add any of 80 technical indicators directly to the chart online - in two clicks. The possibilities are endless!


Dow Jones Index Futures Technical Analysis widget is a modern handy tool that shows ratings based on technical indicators data. The design of the widget is made in the form of a speedometer, thanks to which you can quickly see the results of the summary technical analysis. You no longer need to use many indicators for analyzing financial instruments, the widget will do it for you. In addition, all rating data are updated in real time. These technical indicators are used for technical analysis: Relative Strength Index, Stochastic, Commodity Channel Index, Average Directional Index, Awesome Oscillator, Momentum, MACD, Stochastic RSI, Williams Percent Range, Bull Bear Power, Ultimate Oscillator, Exponential Moving Average, Simple Moving Average, Ichimoku Cloud Base Line, Volume Weighted Moving Average, Hull Moving Average.

The Dow Jones Industrial Average Index (^ DJI) is one of the oldest stock indices. It is a kind of barometer that determines the state of the "blue chips" of the American stock market.

The Dow Jones Industrial Average (DJIA) is one of the major American stock indices. For brevity, it is simply referred to as the Dow Jones Index and is the basis of a whole family of indexes.

It is published by Dow Jones & Company, Inc., a publishing and financial analytics company.

Now the Dow Jones is an indicator of the state of the US stock market, including the shares of the 30 largest companies in the country, and its name remains only as a tribute to history, since many of the modern issuers in it have long ceased to belong to the industrial sector.

Dow Jones futures are traded on the Chicago Mercantile Exchange (CME) under the ticker DJI.

The prototype of the index was created in 1884. Then Charles Dow and Edward Jones, economic observers of the Wall Street Journal, created an indicator for assessing the state of the American transport infrastructure, it was called the Dow Jones Transportation Average. It includes shares of 11 companies. The cost was determined not in dollars, at the start it was 50 points. At this time, it was calculated as the arithmetic average of the stock prices of twelve American industrial companies.

In 1916, the number of issuers in the index increased to 20, and in 1928 - to 30. So many of them remain to this day, however, the method of calculation has been changed - now, instead of the number of companies, the sum of stock prices in the index is divided by a special divisor, which changes in the event of a split or consolidation of securities in the calculation base. This was done in order to maintain the comparability of its values over the entire period of its existence.

Now the Dow Jones index includes securities of the 30 largest companies, including:

The structure of the Dow Jones 30 changes from time to time as the list of the largest US companies changes.

As for volatility, in general it grows along with quotes. If in 2013 the daily price movement averaged up to 300 points, then in 2019 it rarely dropped below 500 points, and in periods of increased volatility it went beyond 1000 points.

The industrial index is the main one in the Dow Jones family, but besides it there are several other varieties, including:

Dow Jones Industrial Average Yield Weighted - similar to the main index, weighted by the dividend yield of its constituent securities.

The Dow Jones Composite Average (DJCA) - is a general index consisting of 65 stocks and combining the three above.

Dow Jones U.S. The Financials Index - is an index of American corporations in the finance industry.

Dow Jones U.S. The Health Care Index - is an index of stocks of companies in the US healthcare industry.

Dow Jones Global Titans 50 - is a global index that includes 50 shares of the world's largest and most famous blue chips, traded on NYSE, NASDAQ, LSE, TSE.

Dow Jones Turkey Titans 20 - is a local index calculated on the basis of the securities of the 20 largest Turkish companies.

Dow Jones Italy Titans 30 - is an index of 30 major issuers in Italy.

The Global Dow USD (GDOW) - it includes 150 blue chips from around the world.

The Dow Jones index family is very large and includes both US industry indices and local indices of other countries. 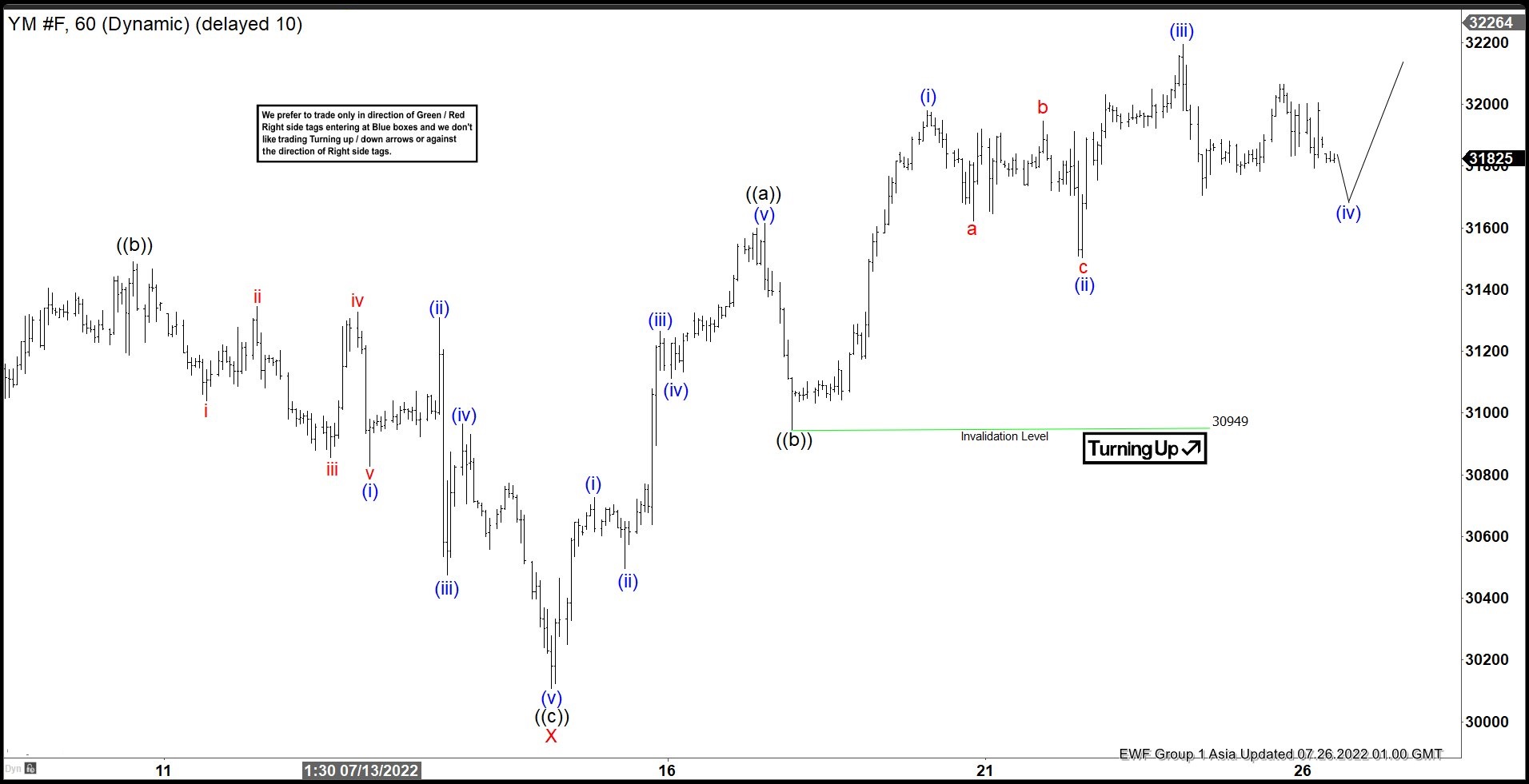 Well. As we can see, Mr. Powell's speech did not bring us anything new, we only received confirmation of the general expectations. The FRS will try to prevent further inflation growth, soft monetary policy will contract at a faster pace. The bet can be raised more than three times and more aggressively.

After the end of the speech, the stock markets immediately began to rise and green quickly replaced red in all US indices.

Let's sum up the results of yesterday.
SP500 yesterday in a slight plus thanks to the financial sector, which really pulls the index.
Tesla shares are, of course, + 10.55%. There was an excellent report on car shipments in the 4th quarter, which exceeded investor expectations. In China, the dynamics are mixed and this is an excellent signal, as it should be in a normal healthy market.
A good day!

Good morning!
The market background is neutral. US and EU futures are in positive territory. In China, only Hang Seng is traded so far, there is -0.62%, Chinese companies start the new year with a slight fall; oil and crypt in a slight plus. Today I also expect neutral dynamics, many markets are still closed.

Hello, Traders and Investors! Go For Short-Selling Trade, Dow Jones is on Bearish Trend On 22-10-2021

I present to your attention the development of a trading idea for the Dow Jones stock index.

So, according to our trading recommendation for a decrease in the price from October 23, the instrument has fully worked out the short scenario: 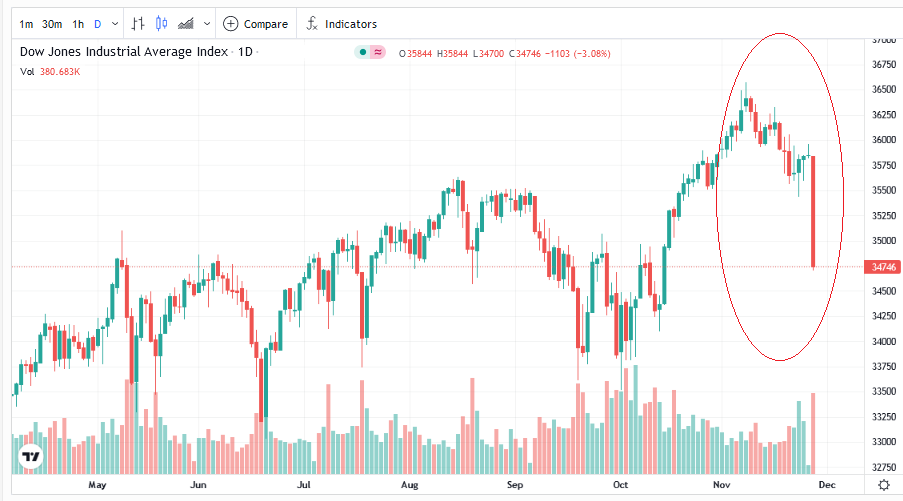 Congratulations to those who took advantage of this trading idea!

A very bold forecast for the fall in the Dow Jones. Very good profits are possible. But what is the reason for the expectation of a fall in this index?