Simple and lightweight Meta Platforms Inc. Stock Live Chart is a powerful free tool that allows you to easily conduct technical analysis online without downloading additional files and applications. In order to meet the needs of the most demanding technical analysts, you can find over a hundred chart analysis tools on our Meta Platforms Inc. stock chart. You can also add any of 80 technical indicators directly to the chart online - in two clicks. The possibilities are endless!


Meta Platforms Inc. Stocks Technical Analysis widget is a modern handy tool that shows ratings based on technical indicators data. The design of the widget is made in the form of a speedometer, thanks to which you can quickly see the results of the summary technical analysis. You no longer need to use many indicators for analyzing financial instruments, the widget will do it for you. In addition, all rating data are updated in real time. These technical indicators are used for technical analysis: Relative Strength Index, Stochastic, Commodity Channel Index, Average Directional Index, Awesome Oscillator, Momentum, MACD, Stochastic RSI, Williams Percent Range, Bull Bear Power, Ultimate Oscillator, Exponential Moving Average, Simple Moving Average, Ichimoku Cloud Base Line, Volume Weighted Moving Average, Hull Moving Average.

Meta Platforms Inc. is the largest social network in the world. Ranked among the five largest technology companies, along with Microsoft, Amazon, Apple and Google. The main assets of the corporation: social network, mobile application Facebook Messenger, Instagram and WhatsApp. The monthly traffic of online platforms exceeds 2.5 billion users. Facebook and Instagram are some of the largest advertising platforms on the internet. The scale and popularity of social networks make Facebook stocks a highly sought after asset.

More than 400 new users register on Facebook every minute, a visitor spends an average of 58 minutes daily on the site. Almost 2/3 of all Internet users are registered on the social network.

A Brief History of Meta Platforms Inc. Stocks from Simple-Invest

Harvard student Mark Zuckerberg founded Facebook in 2004 as an internal student communication platform. A little later, access was opened to students from Boston, and the initial ambitious goal of the young company was to reach all Ivy League universities.

The first major investor in Facebook was Peter Thiel. A couple of months after founding, he invested $ 500,000 in the company. The capitalization of the social network at that time was $ 4.9 million.

A few months later, Facebook opened to all US residents. Since 2006, the network has become international. The main server running Facebook has been moved to Menlo Park, California.

In 2008, Mark Zuckerberg became the youngest billionaire in human history. His capital was US $ 1.5 billion.

The 50 million user mark took Facebook to the next level. Offers to buy the company began to arrive. The owners of the search engine Yahoo! offered $ 900 million for a full Facebook buyout. The creator of the social network declined. Bill Gates offered $ 260 million for a 1.6% stake. Facebook executives accepted the offer. An additional condition was the placement of Microsoft advertisements before 2011.

In 2012, the company acquired the Instagram service. Integration of sites began, a common advertising office was created for two servers.

In the same year, the company successfully completed an IPO. After the lock-up period, Peter Thiel sold 80% of his stake and earned more than $ 1 billion from this.

In 2019, Facebook faced major challenges. The social network experienced a global failure that lasted about 10 hours. In addition, several criminal cases were opened for the transfer of user data to third parties. In 2020, the corporation's management was able to stabilize the situation and ensure further growth and development.

At the moment, Facebook holds the leading position, and the company's stocks remain a reliable way to invest.

In the second quarter of 2020, the company recorded a sharp increase in the number of users and a significant increase in revenue.

The number of people who daily use Facebook services (directly social network, Instagram, Messenger and WhatsApp) has reached 3.14 billion In comparison with the second quarter of 2019, the figure has grown by 14%.

Revenues from other sources reached $ 366 million. This is 40% more compared to the same period in 2019.

All this information creates an optimistic picture for investors and keeps the demand of the stock market participants at a high level. Facebook stocks on NASDAQ may periodically fall due to technical failures or scandals, but this trend is short-lived. The forecasts for the development of the corporation are favorable.

One of America's most powerful tech conglomerates can also be a great investment. Social networks are an integral part of the life of most people on Earth, so the company will provide itself with a stable cash flow from advertising and maintain the stability of financial indicators for a long time to come.

Hello there, I discovered your site via Google while
searching for a related topic, your website came up, it appears to be like good.
I have bookmarked it in my google bookmarks.

Hello there, simply became alert to your blog through Google, and found that it's truly informative.
I am gonna watch out for brussels. I will be grateful when you continue this in future.
Numerous other people will probably be benefited from
your writing. Cheers!

I know this if off topic but I'm looking into starting my own weblog and was wondering what all is needed to get setup?
I'm assuming having a blog like yours would cost a pretty penny?
I'm not very web smart so I'm not 100% certain.
Any suggestions or advice would be greatly appreciated.
Many thanks

This is really interesting, You are a very skilled blogger.
I've joined your feed and look forward to seeking more of your fantastic
post. Also, I've shared your website in my social networks!

This is not a stock, but some kind of stone .. That is why I constantly bother selling it. The correction seems to go normal. And the stock, as part of the growth, makes small bounces and grows further. Or it is in a flat - when all stocks fall.

Today we will look at Facebook stocks in medium-term wave analysis. 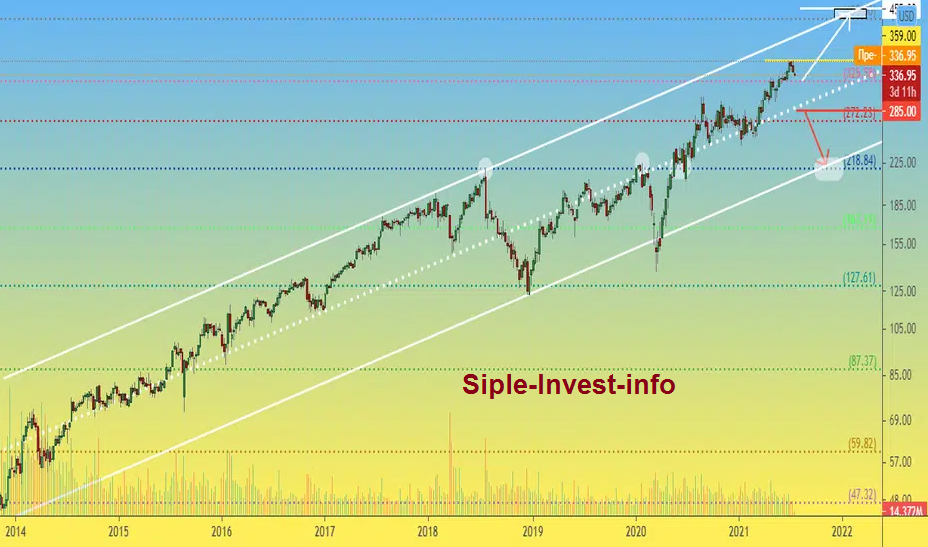 The more the world absorbs: the Internet, the virtual universe and the like, the higher the stock price of the companies that control social networks.

Since then, the upward trend in stocks has begun, which has been going on for almost 10 years.

Today, Facebook stocks price is ten times the IPO price of a stocks and 20 times the minimum.

From 2014 to the current day, the price of Facebook shares has been moving in a beautiful channel upward, where the cyclical movement in the upper and lower parts of the channel is clearly traced.

Alternative scenario: Below $ 285, it is better to abandon the long for a while, as the way will open for a fall to $ 218-220. There will be the lower border of the growth channel, as well as a strong mirror level, which has repeatedly served as resistance and support in the past.