Central Index Key (CIK): 0000789019 | ISIN: US5949181045 | Symbol: MSFT | Type: Stock.
Microsoft is a global giant in the field of computer technology, a manufacturer of software for PCs, smartphones, game consoles, etc. It is included in the S&P 500 index (505 American companies with the largest capitalization). In February 2020, the corporation once again became the most expensive company in the United States. Microsoft Corp. (MSFT) stock price today, live price online, charts, professional analytics, technical and fundamental analysis, comments, reports, dividends and more about Microsoft.


Simple and lightweight Microsoft Stock Live Chart is a powerful free tool that allows you to easily conduct technical analysis online without downloading additional files and applications. In order to meet the needs of the most demanding technical analysts, you can find over a hundred chart analysis tools on our Microsoft stock chart. You can also add any of 80 technical indicators directly to the chart online - in two clicks. The possibilities are endless!


Microsoft Stocks Technical Analysis widget is a modern handy tool that shows ratings based on technical indicators data. The design of the widget is made in the form of a speedometer, thanks to which you can quickly see the results of the summary technical analysis. You no longer need to use many indicators for analyzing financial instruments, the widget will do it for you. In addition, all rating data are updated in real time. These technical indicators are used for technical analysis: Relative Strength Index, Stochastic, Commodity Channel Index, Average Directional Index, Awesome Oscillator, Momentum, MACD, Stochastic RSI, Williams Percent Range, Bull Bear Power, Ultimate Oscillator, Exponential Moving Average, Simple Moving Average, Ichimoku Cloud Base Line, Volume Weighted Moving Average, Hull Moving Average.

Microsoft is a global giant in the field of computer technology, a manufacturer of software for PCs, smartphones, game consoles, etc. It is included in the S&P 500 index (505 American companies with the largest capitalization). In February 2020, the corporation once again became the most expensive company in the United States. Microsoft is a large proprietary computer software company. The brand owns production units in several countries, therefore it is considered transnational.

The company is widely known all over the world as the creator of the most popular software for personal computers and Windows laptops, Microsoft office programs.

Microsoft was founded in 1975 by Bill Gates and Paul Allen. It is headquartered in Redmond, Washington. Satya Nadella is currently the CEO. In 2019, the number of Microsoft employees was 144 thousand people. There are representative offices in many countries of the world. The company's software is sold in 80 countries and translated into 45 languages.

The brand is best known for the release of software - Windows operating systems. Also "Microsoft" is engaged in the development of programs for the processing of electronic working documents - Microsoft Office.

A Brief History of Microsoft Stocks from Simple-Invest

1975 - Bill Gates and Paul Allen proposed to improve the Basik language installed on a new personal computer. The deal ended positively, and the developers decided to create their own company Microsoft.

1979 - Purchase of a license to use Basik Apple language and Radio Shak.

1981 - Microsoft becomes a corporation. Release of the first OS of the company MS-DOS.

1983 - Announcement of the release of Windows - an extension for MS-DOS.

In 2020, the company carried out a series of acquisitions - it acquired ZeniMaz Media for $ 7.5 billion, ADRM Software, RPA Softmotive, Metaswitch Network (a software developer for 5G networks), etc. It is expected that the acquisition of other companies will make the issuer's securities even more attractive for investors.

Microsoft surpassed $ 1 trillion in 2018. The company's revenue is growing steadily: in 2019, it increased by 14% compared to the previous year and amounted to $ 125.843 billion. Net income - $ 39.24 billion. The main reason for the growth is the development of the cloud business and office applications Office and Office 365. 2019 was a record year for Microsoft, and the company did not plan to stop.

Thus, even in a relatively difficult period for the global economy, the corporation managed to defend its position, which also affected the value of Microsoft stocks. The fact is that due to the situation in the world and the global transition of companies to a remote format of work, the demand for a number of developer's products has significantly increased.

The exchange rate difference by the end of 2021 compared to 2020 will be from 13% to 16% according to the most conservative forecasts. Experts predict that the value of one of the most expensive US companies will be at least $ 245-250 per stock.

Buy stocks of Microsoft is worth those who seek to receive a stable return on their investment portfolio. The yield on securities also consists of dividends. The company pays them out in a stable and transparent manner. In November 2020, holders of the issuer's securities received $ 0.56 per stock.

Microsoft stock is a valuable asset, the value of which will only increase over the years. You can consider the purchase as a long-term investment with the prospect of growth, and for the purpose of making money on the exchange rate difference.

Thank you for some other excellent post. The place
else may just anyone get that kind of info in such an ideal manner
of writing? I have a presentation subsequent week, and I'm at the
search for such info.

Greetings! This is my 1st comment hee so I just wanted to
give a quick shout out and say I genuinely enjoy reading through
your articles. Can you recommend any other blogs/websites/forums that cover the sam subjects: stock, futures, bonds and options trading? Thanks a lot!

Microsoft announced an 11% increase in its quarterly dividend to 0.62 cents per share. The annual dividend yield is 0.8%, which is half the average for the American market. The company has been increasing its payments for 17 consecutive years.

Dividends represent a small fraction of free cash flow and profits. The payout ratio is only 30%. The rest of the available funds are sent to buy back shares, or remain on the balance sheet. Over the past year, $ 23.5 billion was spent on the buyback program, and $ 16.5 billion on dividends. The cash on Microsoft's balance sheet exceeds $ 130 billion.

Microsoft remains a growth company, so dividends are a bonus, but not a motivation to buy. The company's product portfolio is diversified and aligns well with key industry trends. The company's growth points are in the segments of cloud technologies, games, security products, LinkedIn. In the next 5 years, the average annual revenue growth should be 13% - at the level of the top 20% of the best companies in the US equity market. The share is in the portfolio under the active US strategy.

US stock indices Dow Jones and S&P 500 renewed records on Thursday after labor statistics, which indicated the continuing recovery of the US economy. Stocks of the largest US companies by capitalization - Apple Inc, Microsoft Corp, Amazon.com, Facebook Inc and Alphabet Inc, the parent structure of Google, rose in price and pulled the S&P 500 and Nasdaq indices with them. "The S&P 500 has hit another all-time high today, and for good reason," said Terry Sandven of the U.S. Bank Wealth Management.

Imagine if you were buying $ 100 worth of Microsoft stock every month since 1987, who would you be now? The president would personally call you to find out how you are doing and would you like to sit in a restaurant today)))

The most stable Microsoft stock, no one knows when it will crash...

Consider a wave analysis of the very famous Microsoft stock. 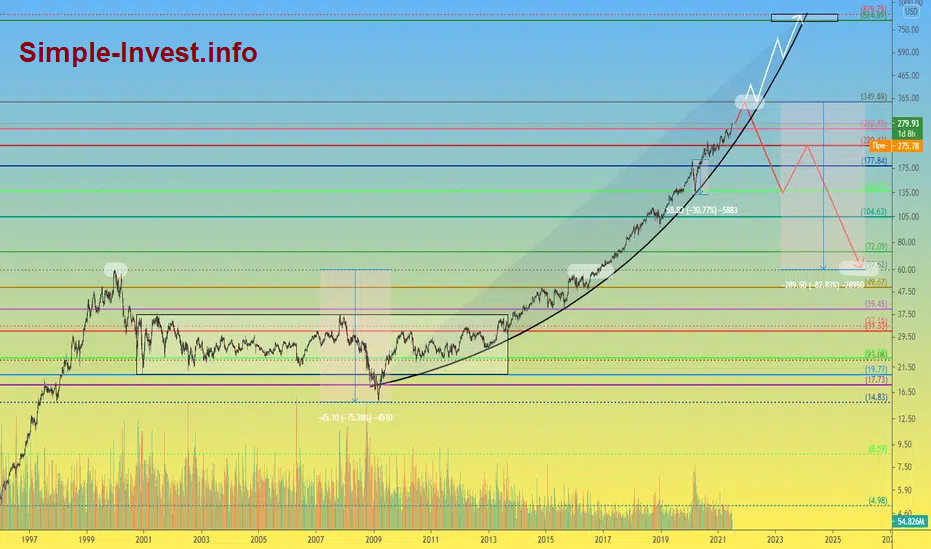 Patient investors have been gaining a position in MSFT stocks for 13 long years, and the price itself during this period was stuck in the consolidation of $20-37. However, look at the result: as of now, the value of Microsoft stocks has risen by 1000%, and the super cycle of growth of stocks itself has been going on for 8 years.

Moreover, during this long super cycle of growth, there have not yet been significant corrections. The recent news that the Pentagon is breaking a $ 10 billion contract with Microsoft shook the stocks price down 1%, but the next day MSFT stock price reached its all-time high.

We see a medium-term target of growth for Microsoft stocks to $ 349-350, from where a long-term correction may begin to level of $ 60 per stock for MSFT.

Of course, against the background of such a powerful growth, it is hard to believe in such a deep correction. But it would not be a bad thing to test the strength of the top level of $ 60 per stock for Microsoft.