Simple and lightweight Barclays Share Live Chart is a powerful free tool that allows you to easily conduct technical analysis online without downloading additional files and applications. In order to meet the needs of the most demanding technical analysts, you can find over a hundred chart analysis tools on our Barclays share chart. You can also add any of 80 technical indicators directly to the chart online - in two clicks. The possibilities are endless!


Barclays Share Technical Analysis widget is a modern handy tool that shows ratings based on technical indicators data. The design of the widget is made in the form of a speedometer, thanks to which you can quickly see the results of the summary technical analysis. You no longer need to use many indicators for analyzing financial instruments, the widget will do it for you. In addition, all rating data are updated in real time. These technical indicators are used for technical analysis: Relative Strength Index, Stochastic, Commodity Channel Index, Average Directional Index, Awesome Oscillator, Momentum, MACD, Stochastic RSI, Williams Percent Range, Bull Bear Power, Ultimate Oscillator, Exponential Moving Average, Simple Moving Average, Ichimoku Cloud Base Line, Volume Weighted Moving Average, Hull Moving Average.

Barclays shares are traded at the London Stock Exchange (LSE) under the BARC ticker. The trading session passes from 11:00 to 19:30. The company consistently pays dividends every six months.

Barclays shares can be buy on other stock exchanges:


The cumulative trading volume on these exchanges averages 40-50% of the number of transactions on LSE.

The entire bank released more than 17 billion shares. The overwhelming majority of securities of the company traded on the London Stock Exchange. Most of the corporation shares are located in large banks and other financial institutions (87%), another 10% of various companies and 3% of private investors.

Barclays in July 28, 2021 reported a record increase in profit in the first half of the year. Growth contributed to the activity in its investment bank and in the direction of operations with shares.

Also, the Bank announced plans to pay dividends in the amount of 2 pence per share and stated that it will buy out shares in the amount of 500 million pounds sterling. In April, Barclays completed the redemption of shares by 700 million pounds. Earlier this month, the Bank of England took restrictions on payments to shareholders. Against this background, the bank's shares jumped by more than 5%.

A Brief History of Barclays Shares from Simple-Invest

Barclays - British financial conglomerate working mainly in the field of banking. The main markets of the company are United Kingdom, Europe, Asia and the United States.

Barclays Bank is among the top ten of the oldest banking organizations in the world. The bank was founded in 1690 in London two jewelers John Frime and Thomas Gould. In 1736, Frima's son, Joseph, took his son-in-law D. Barclay as a partner, whose name and underlies the name Barclays.

In 1938, Barclays bought the First Indian Exchange Bank, who worked in London since 1936 with the assistance of the Indian Central Bank.

In 2001, Barclays began to close his own branches in the UK. More than 170 branches have ceased to work, most of which served small settlements.

In the same year, a company was formed jointly with Canadian Imperial Bank of Commerce (CIBC). The purpose of its creation was to carry out operations in the Caribbean Islands. The United Organization was to be called the first Caribbean International Bank.

In 2003, Barclays bought the American company for the production of banknotes "Juniper Bank", renaming it to Barclays Bank Delaware. At the same time, a merger with one of the largest banking organizations in Spain "Banco Zaragozano" has occurred.

In March 2009, Barclays Bank was accused of non-compliance with the legislation in the field of finance laundering. According to official data from a non-governmental organization, one of the banks of the Bank, located in Paris, continued to serve the bank accounts of the Son of the President of Equatorial Guinea Theodoro Obiang even after in 2004 there were evidence that Obiang rented oil revenues from state funds.

At the same time, in the British newspaper "The Guardian", documentation on the direction of 11 million pounds of sterling was published on the creation of a network of companies on the Cayman Islands to care from paying taxes. After the proceedings, in 2012, Barclays ordered to pay 500 million pounds of sterling into the state's income as taxes that the bank tried to avoid criminal schemes.

In June 2012, Barclay's Bank received a fine of 290 million pounds of sterling for fraud with the daily settings of the London Interbank interest rate (LIBOR) and the European Interbank Rate (Euribor). It was found that the bank distorted interest rates information that influenced the definition of LIBOR and EURIBOR. This was done to optimize the profit and presentation of the bank in a more advantageous light during the crisis. Machinations were conducted in the period 2005-2009. Almost daily.

In 2017, there was an accusation of fraud against the former head of Barclays Bank D. Varley and several of his colleagues.


The bank has a centuries-old history, wide world representation and until recently served the largest bond index, while maintaining his name in his name (at least until 2021). The last few years have been overshadowed by scandals and a strong fall of the shares of the bank, which, nevertheless, managed to straighten his financial position.

Today, Barclays Bank is part of the top 20 largest banking organizations in the size of the property belonging to it, and is also one of the world's largest financial conglomerates. Bank subsidiaries are present in Europe, America and Asia countries. The number of bank employees is about 80 thousand people. Now Barclays is one of the largest financial and banking company. Conglomerate is among the "Gold Fixing" participants on LSE.

After the growth of Barclays shares from February 2021 to June 2021.

The stock price has decreased in the area of 280 pounds of sterling per share. This is a correctional wave. 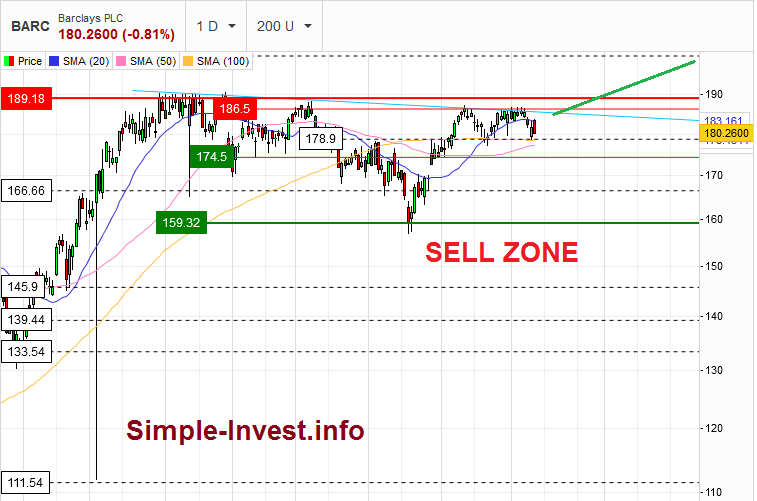 After completing the correction, we predict the growth of shares in the third wave in the area of 500-600 pounds of sterling per share of Barclays.