Central Index Key (CIK): 0000831001 | ISIN: US1729674242 | Symbol: C | Type: Stock.
Many investors are considering buying securities of large American companies. This is due to many factors, one of which is government assistance in the event of serious financial fluctuations. So, one of the global and systemically important banks, according to the Financial Stability Board, is Citibank. It is the backbone of an international financial conglomerate. Citigroup Inc. is included in the "big four" of the largest banking institutions in the United States. In addition to Citigroup, it includes Bank of America, JP Morgan Chase and Wells Fargo & Company. Citigroup (NYSE:C) stock price online, charts, stock price history, technical and fundamental analysis, reports, dividends, comments and more.


Simple and lightweight Citigroup Stock Live Chart is a powerful free tool that allows you to easily conduct technical analysis online without downloading additional files and applications. In order to meet the needs of the most demanding technical analysts, you can find over a hundred chart analysis tools on our Citigroup stock chart. You can also add any of 80 technical indicators directly to the chart online - in two clicks. The possibilities are endless!


Citigroup Stocks Technical Analysis widget is a modern handy tool that shows ratings based on technical indicators data. The design of the widget is made in the form of a speedometer, thanks to which you can quickly see the results of the summary technical analysis. You no longer need to use many indicators for analyzing financial instruments, the widget will do it for you. In addition, all rating data are updated in real time. These technical indicators are used for technical analysis: Relative Strength Index, Stochastic, Commodity Channel Index, Average Directional Index, Awesome Oscillator, Momentum, MACD, Stochastic RSI, Williams Percent Range, Bull Bear Power, Ultimate Oscillator, Exponential Moving Average, Simple Moving Average, Ichimoku Cloud Base Line, Volume Weighted Moving Average, Hull Moving Average.


Citigroup Inc: Information about the Issuer

Citigroup stocks are listed on the NYSE under the ticker C. In addition, securities can be bought on major European exchanges, including London, Hamburg, Munich, Frankfurt and others. The issuer's shares are included in a number of indices, for example, S&P (100, 500 and 500 Financials, Global 100, Composite 1500 Financials, Industrials Composite), DJ (US, Financials, Global Titans, Sector Titans Composite, Banks Titans 30, Value, Large- Cap Value, Large-Cap, Banks), NYSE (Composite, TOP US 100), etc. The value of assets managed by Citigroup is $ 2.3 trillion.

Citigroup is headquartered in New York. The banking institution ranks third among the largest in the United States. The issuer is in 33rd place in the Fortune 500 list. More than 200 million people have opened bank accounts, and the business is represented in 160 countries of the world. The conglomerate employs 210 thousand people. For three years in a row, Fast Company has ranked Citigroup among the top leaders in creating the best jobs for innovators.

In the United States, there are about 700 branches out of 2600 around the world. They are located primarily in major cities such as New York, San Francisco, Miami, Los Angeles, Chicago, Washington, etc. The conglomerate provides services to corporations, governments of various countries, consumers and various institutions. Among the main directions:


In addition, brokerage operations with securities are carried out, research work is underway to study the stock market under the order of clients.

A Brief History of Citigroup Stocks from Simple-Invest

The story begins in 1811, when a group of merchants decided to create a city bank by transforming the New York branch of the bankrupt First Bank of the United States into an independent institution. It was named City Bank of New York. This step was caused by the need to increase the competitiveness of New York in front of Boston, Baltimore and Philadelphia, which in those years were the drivers of US economic development. In the same year, the bank's charter was approved, which marked the beginning of history.

In 1812 he was awarded for financial assistance in the US war against Great Britain. It received the status of a state depository.

In 1861 he supported the banking institutions of Abraham Lincoln, in 1865 changed the charter and became national. National City Bank of New York meets all federal requirements to begin operating on behalf of the US Treasury Department. Among other things, he became an active participant in the introduction and distribution of a single currency - the dollar. The new name of the bank appeared on banknotes of various denominations up to $ 1000, which remained in circulation until 1935.

The year 1866 was marked by a significant event in the life of the bank. On its fourth try, the company succeeded in laying a transatlantic cable between New York and London. This investment project helped to overcome the consequences of the 1893 crisis. Major customers in 1893 were sugar traders, cotton traders, coal mines, gas companies, and southern railroad companies. In 1894, the National City Bank of New York becomes the largest in the United States of America. In 1897, the global market was mastered. The bank began investing in large projects in Latin America, cooperating with Chinese businesses, etc.

In 1914, at the height of World War I in Europe, the bank opened the first overseas outpost of National City Bank, a branch in Buenos Aires. Argentina experienced strong economic growth, so the branch became profitable almost immediately. A year later, a second overseas office opened in Rio de Janeiro, Brazil. Further, branches actively began to open in other countries of Latin America. A large international bank with a network in Asia and Europe was also acquired. This strategy made it possible to reach $ 1 billion in assets by 1919.

In 1921, the company's offices were located not only in the USA, Canada, Europe and Latin America, but also in Tokyo. The presence in key markets yielded results and managed to attract significant foreign investment to the US economy. Throughout the 20s of the twentieth century, the company was actively growing, absorbing competitors, wisely investing funds and providing retail banking services.

During the Great Depression, the bank experienced difficulties due to the outflow of deposits. However, he did not lose profitability. This was largely due to the presence of foreign units. Also, measures were taken to cut employees, reduce salaries and dividends. The management of the company took a pending position during the Second World War, trying to maintain an extensive network of branches. After the end of hostilities, the bank chose corporate lending as its main direction.

In 1955, the bank received a new name - First National City Bank of New York. In the same year, markets in Africa and the Middle East were opened, offices were established in Egypt, Liberia, Lebanon and Saudi Arabia. By 1975, the list of African and Asian countries of presence was significantly expanded.

In the 70s, the direction of credit cards was opened, all branches in the United States are equipped with ATMs. The bank was also renamed Citibank, N.A. Business shifted to consumer service. From the late 70s to the late 80s, management faced financial problems caused by economic instability in key foreign markets. This gave impetus to the expansion of its presence in the United States.

1998 saw an important merger. The Travelers Group and Citicorp merged to form the financial conglomerate Citigroup. This significantly expanded the list of services, increased the market capitalization to $ 30 billion.

During the 00s, a number of successful purchases were made by various banks in Poland, Japan, Great Britain, Mexico, Taiwan. Increased presence in the markets of the Russian Federation and China.

In the period 2007-2008, the US government allocated $ 45 billion for Citigroup and guaranteed losses for another $ 306 billion. The global financial crisis forced about 100 thousand employees to be laid off and the most unprofitable subsidiaries to be sold.

Over the past 10 years, foreign divisions of consumer banking have been actively reduced. This trend continued in 2021.

As of 2021, Citigroup's market capitalization is $ 148 billion. Revenue for the second quarter of 2021 is $ 17.5 billion, which is 11.6% lower than a year earlier. At the same time, profit per security increased and amounted to $ 2.85 against $ 0.38 in the second quarter of 2020. Such results were unexpected, they exceeded analysts' forecasts. Reserves also increased to $ 19 billion. At the same time, the revenue of the divisions of Global Consumer Banking, Institutional Clients Group and Markets & Securities Services decreased, which is largely due to the crisis caused by the pandemic.

For the second quarter of 2021, the company generated net income of $ 6.2 billion, which is $ 1.1 billion more than in the same period in 2020. The company bought back 40 million common shares. According to analytical data, the target price for Citigroup stocks for the spring-summer of 2022 is about $ 85 per share.

The company is gradually changing its strategy for the global retail business, which in the long term will allow redirecting resources to the development of the most competitive areas. At the same time, the institutional direction will remain in all countries where Citigroup branches are present. The retail business will be focused on key wealth management centers in the UAE, Singapore, London and Hong Kong.

This trend is also observed in the insurance sector, which indicates the reorientation of the company, the strengthening of the corporate and investment banking division. The focus is on emerging markets, which could potentially lead to an increase in Citigroup's revenues and profits. In addition, the company is strengthening the direction of providing analytical services.

Citigroup also creates a division for working with cryptocurrency and blockchain. The possibility of trading bitcoin futures for institutional clients is being considered.

In the context of a potential increase in the US Federal Reserve rate, the banking sector may benefit. Such companies receive their main income from the spread (difference in rates) between loans and deposits. The higher the rate in the country, the larger this spread can be made.

Citigroup is one of the world's largest banks providing a full range of financial services. As of December 31, 2020, the company had 2,303 branches, mainly in the United States, Mexico and Asia. Citigroup Inc. was founded in 1812 and is headquartered in New York.

Revenue and profit continue to recover. Net income is positively affected by the reduction in reserves that were accumulated during the pandemic.

Since the beginning of the year, the share buyback program continued, which was temporarily frozen. By the way, Citi did not cut its dividend last year, but it didn’t increase it either, leaving its quarterly payment at $ 0.51.

The annual dividend yield to the current price is about 3%. Growth reserves remain, the average payment of net profit over the past 3 years is only 20%.

In the third quarter, the return to shareholders amounted to $ 4 billion, following the results of 9 months - $ 11 billion. Management prioritizes shareholder payments and their growth in the near future, this is positive.

In general, the banking sector in the United States has been stagnating for a long time due to near-zero interest rates; the potential growth of the US Federal Reserve's interest rate in the coming years may breathe new life into these companies.

We bring to your attention the wave analysis of Citigroup stocks. The graph looks very interesting. 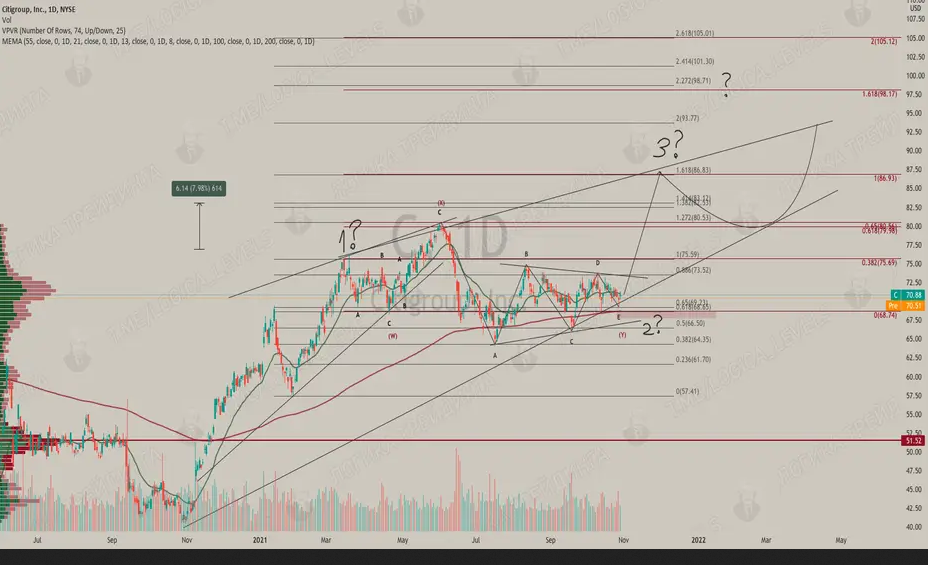 Now the price of Citigroup shares is in the 2nd correctional wave. After the completion of the 2nd wave, the 3rd impulse wave should begin.